Harper's Weekly coverage of the Siege of Cincinnati

From the October 4, 1862 issue of Harper's Weekly come the following article and drawings of events that happened in Northern Kentucky and Cincinnati in September 1862, when Confederates under the leadership of General Henry Heth threatened this important river city and region. (This same issue also contains the text of the preliminary Emancipation Proclamation, plus coverage of the battle of Antietam.)

In the next couple of days, I will make another post with some comments from the Cincinnati Enquirer from this time period.

The reference to "Covington" and crossing the pontoon bridge refer to the troops being stationed along the hillsides of Northern Kentucky, across the Ohio River from Cincinnati, on the south side of that stream. The band they referred to probably came from the Newport Barracks, an army installation in Newport, Kentucky, another city on the Kentucky side of the Ohio River, separated from Covington by the Licking River.

Also, I wonder if the "A. Mosler" they refer to here was intended to be Henry Mosler, who worked for Harper's Weekly and apparently was in the region during this timeframe.

From page 636:
AT CINCINNATI
We publish on page 637 two illustrations from Cincinnati, from sketches by Mr. A. Mosler. One of them represents a REGIMENT OF VOLUNTEERS ENTERING THE FIFTH STREET MARKET-HOUSE for dinner. Thousands and thousands of soldiers have been fed in this building daily since the rebels first menaced Cincinnati. The other sketch represents the RETURN OF THE CINCINNATI MILITIA after the retreat of the rebels.


A Cincinnati paper says: "Yesterday was a gala day for the thousands of true and patriotic Cincinnatians who promptly responded to the call for volunteers to defend the city from an attack by the approaching enemy. They went to the field manfully, and with hearts and souls burning with the patriotism of their sires of '76. While in the field they endured, without a  murmur, the hardships and privations of the soldier's life, through sunshine and rain, attending to drills and all the minutiae of military tactics, so that in the brief period of one week they were almost equal to volunteer in the service.  They were men of all classes of society, rich and poor, high and low, and on one common level, and under one flag, rallied together as a family of brothers, to resist the encroachments of an army seeking the destruction of their homes and firesides. They did their duty well, and were yesterday, much against their wishes, relieved from further service at present. They were in the morning notified by Major-General Wallace, to whose call they so generously responded, that at 12 o'clock each regiment, six in number, should break up camp and return to Cincinnati.

At three o'clock three of the regiments marched to the head-quarters of General Wallace in Covington, preceded by the United States Barracks Band. The remaining regiments not coming up by some misunderstanding, the three first, headed by General Wallace and staff, took up the line of march, moving to the river, and thence across the pontoon bridge to this city.The levee was densely crowded with citizens. As the military pageant was crossing the bridge a 2-pounder cannon, on board the steamer Emma Duncan, belched forth a welcoming salute. The procession moved up Walnut to Front, east to Broadway, north to Fourth, west to Vine, north to Seventh, west to Mound, north to Ninth, east to Elm, north to Twelfth, where the General and staff halted, and the entire column passed in review. The streets along the entire line of march were crowded with citizens, and national emblems and the "flag of the free" waved from every housetop and window. Such an ovation was never before witnessed in this city, and as an impromptu proceeding was creditable to the Queen City and a fitting compliment to her noble sons.While the troops passed the Major-General, at the intersection of Twelfth and Elm streets, they greeted him with deafening applause - a just acknowledgment of their esteem for one of the live Generals of the day." 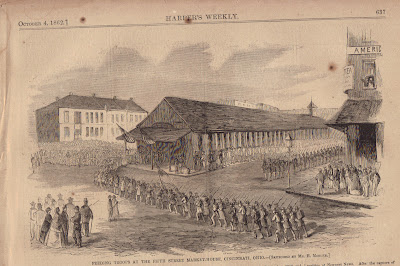 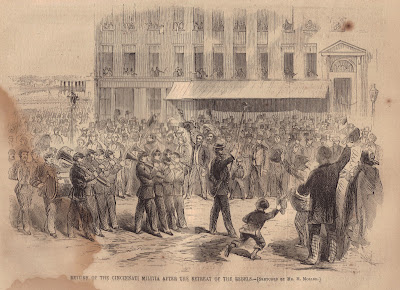 My apologies for the uneven scan of the first illustration. Both of these come from an original copy of the paper, with signs of its age being quite obvious.