Bibliography & Notes of my Nelson/Davis research

Here are the sources and resources I used to look into the aftermath of the Jefferson C. Davis murder of William "Bull" Nelson on September 29, 1862. I have added a few notes and comments here as well. 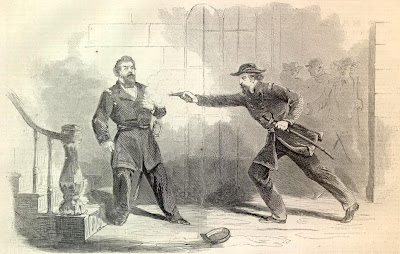 This illustration is from Harper's Weekly of October 18, 1862 and is captioned: "The Assassination of General Nelson by General Jefferson C. Davis - sketched by Mr. H. Mosler"  It is courtesy of www.sonofthesouth.net   I thought it was appropriate to use it in this discussion, but with my first post already being so long, I added it to this entry instead.


Listed below are the theories I found and the sources in which I found them. These sources either cited a specific reason for Davis to go unpunished or included enough reaction to the event that I found it appropriate to include these reactions as possible explanations about how this event played out.
My breakdown of the categories and how often I saw them was (a couple of sources used more than one that fit into the categories I decided to use)
:
1. Davis's influential friends or individuals helping him: 7 times (5 times Oliver Morton, 2 times Horatio Wright)
2. Nelson's reputation/unpopularity: 5 times (plus 1 other disagreeing with this view)
3. "Matter of honor:" 3 times
4. Buell's command uncertainty/business: 4 times
5. Union need for talent and leadership in the theater: 3 times
6. Davis was honorably acquitted at trial:  1 time. (His obituary mentioned this, but this claim is incorrect. I still feel it is worth mentioning)

Author unknown, "Although not convicted of murder, Davis was passed over for advancement in rank" KentuckyCivilWarBugle.com, Accessed October 23, 2010, http://www.thekentuckycivilwarbugle.com/2010-1Qpages/murder.html