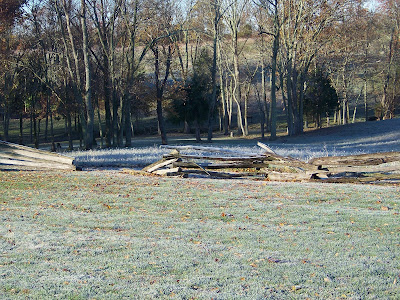 As I mentioned previously, I really enjoyed my trip to Perryville. It is a beautiful spot and I again thank Darryl Smith of Ohio at Perryville for leading the hike and providing such an outstanding tour of the sites we visited. His knowledge of the battle, the units involved and their movements, how they interacted and how the topography of the land affected them is top-notch and he did a fantastic job of telling the story of the battle in an understandable and informative way. If anybody gets the chance to participate in one of his future hikes, I gladly recommend it and hope to be there again myself. I also hope readers may consider donating to the Civil War Trust's efforts to purchase 141 more acres of this battlefield. 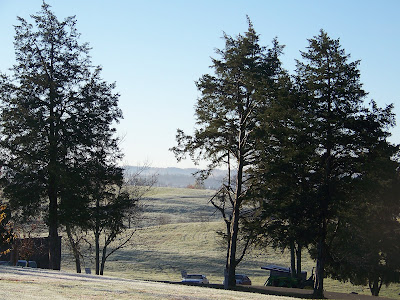 I had never been to Perryville this late in the year, or so early in the morning. (I arrived about 9:15, the day before time "fell back") Seeing the ground and area covered in frost was a new experience for me and it was beautiful, especially in the very bright early-morning sunshine. I'm not sure these do justice to the view I saw while standing there, but I am posting some of the pictures I took. (To see all of the 150+ pictures I took, please see my photobucket album. I have not added descriptions to the pictures. I did take a lot of shots of cannon and fences, but plenty of the ground itself too.) 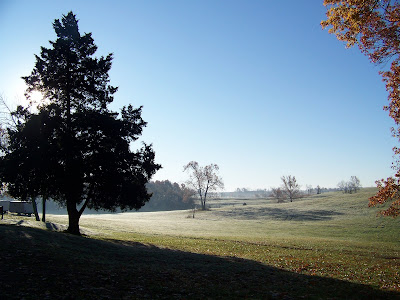 I wish I could have captured the whole feeling I experienced when I got there - the birds singing and chirping, including a few "bob-whites,"  a dog barking somewhere in the distance, its bark echoing in the hills,  the sound of dew dropping from leaf to leaf on a big sycamore tree, or the occasional brown, broad leaf floating in the wind while falling from that same tree. I cannot imagine nature producing many more ideal, serene and peaceful scenes than it did yesterday morning. That this all occurred over what had been the scene of such fighting and killing was something I did not realize or appreciate at the time, but now think about in wonder of that irony.  I was truly blessed to experience such a fine morning.

One point I had not considered before, but that Darryl mentioned was that the topography of the battlefield could be confusing. Many who have read about Perryville have read about the "acoustic shadow" that supposedly kept Union General Don Carlos Buell from hearing the sounds of the fighting, but the visuals could cause some uncertainty too. In the below photo, the group of trees on the right is actually on a third ridge (picture taken from the first ridge.) There are another ridge and valley in between where I took the picture and those trees. This caused the Confederates some confusing in figuring out how to aim their guns. I'm sorry I did not take a better picture of it, but I guess I got too cute with getting the leaves in the foreground.

Here is a picture of the Bottom house, perhaps the most well-known part of the battlefield, even though the house and land around remain on private property, not part of the state park.

Below are a few scenes that I liked.

On the above photograph, you can see a hill in the immediate foreground, then another one in front of it, and a few more in the distance. This is an example of "rolling hills, " a phrase that is much easier to understand when you see (and walk) such hills.

I'm not sure there is any way to explain the many ridges on this battlefield. Even the pictures cannot really do it justice - you have to walk it and see it for yourself. The hill in that final picture was much steeper and longer than it appears in the image (and came just after we had climbed up a previous long hill, away from the creek.)  The next-to-last photo sort of shows how it goes -hill, valley, hill, valley, etc. on and on.  Some of the hills, as in the bottom photo, were bigger than in this scene. Multiple times during the battle, the Confederates would chase Union forces off one hill, only to get to the top of that ridge and see the Federals reforming on yet another ridge-line in the distance. Rinse, lather, repeat.

What a wonderful day and hike this was. I enjoyed it tremendously and hope to make a return trip to this hallowed ground again next year. I strongly encourage others to do the same.