Slave Chose Death for Her Child

Many people may already be familiar with the story of Margaret Garner and her actions when she tried to escape from slavery, but here is a Cincinnati Enquirer account of her story. It is a remarkable tale and shows how unhappy she was in slavery, even though some slaveholders (and non slave-holding whites) insisted that African-Americans were content in their role as slaves. That she would prefer her child to die rather than to become someone else's property is a strong statement of her feelings about slavery.

I admit that the fact this story took place in Northern Kentucky, not terribly far from where I live, and Cincinnati, where I work, does make it more fascinating to me than it ordinarily might, but this also is a story of national importance and interest in terms of a slave trying to take control of a situation and fighting against the "peculiar institution" even though many Kentuckians at the time felt slavery in this state was less harsh than in the deeper south.


Her story became an opera that premiered in 2006.  For those who appreciate and understand opera much more than I do, here is a YouTube excerpt from the Opera Company of Philadelphia's production on February 24, 2006.


I mentioned this story previously when I found an advertisement in a local newspaper. The man who took out this advertisement, offering to trade land for negroes was probably the same man who owned Margaret and likely fathered her children.

Here is a map of Kentucky (an image I've used several times) with Boone County, where the Garners lived, circled. Its northern and western borders lie along the Ohio River, with Cincinnati just across the river on its northern side. This river served as an unofficial dividing line between free states and slave states, as well as a popular escape route for slaves. Being a border state with free states just across the river was one of the challenges Kentucky slaveholders faced. 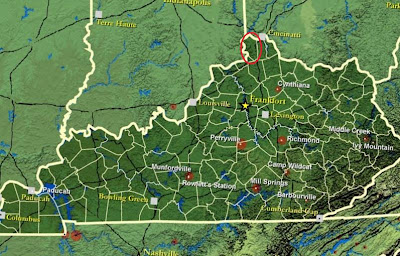