Book Review: Plenty of Blame to Go Around 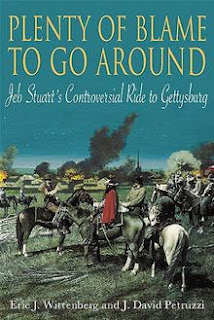 When I first discovered the Civil War blogosphere a few years ago, among the first blogs I found was Eric Wittenberg's Rantings of a Civil War Historian. I probably discovered it through the Civil War Trust's website, but I soon started reading it and enjoyed his stories about Civil War Cavalry, unknown cavalrymen and commentary on Civil War related news. He also discusses his own writing projects, which include several books, and this led me to wanting to read his work and see how I liked it.

Well now I finally have done so.  Plenty of Blame to Go Around, co-authored by Mr. Wittenberg and another well-known Civil War Cavalry expert J. David Petruzzi, (see Hoofbeats and Cold Steel) is an examination of both Jeb Stuart's famous (or infamous, depending on your perspective) cavalry ride at the end of June of 1863 as the Gettysburg campaign was heating up, and the controversy that this ride created.

Let me start by simply stating: this is a really good book. The writing has a good flow, making it readable and enjoyable, and it contains a lot of information and analysis. The authors clearly did a lot of research through many sources; this thoroughness comes across as they describe and analyze Stuart's ride and the decisions he made.

The book starts by examining Stuart's rider and the many incidents that occurred during this adventure, including battles, skirmishes, delays and other events. I really like how the authors are willing not only to tell what happened, but to point out future consequences of certain actions. One such example occurred on pages 63 and 64 when they mention a detour Stuart took. They followed that up with the ominous words: "The seemingly insignificant change of plans had far-reaching consequences no one could foresee at the time."

As a reader, I find that a sentence like that really grabs my attention and makes me anxious to keep reading to see what those consequences are. The authors make similar statements throughout their description of Stuart's ride, showing when questionable decisions were made or actions taken (or not taken), instead of waiting to tell the story and then go back to explain when mistakes occurred. It is similar to how a work of fiction may include the tool called foreshadowing, though this was not at all subtle warning of what was to come. I really appreciated how the authors used that technique in this book. It definitely added to the understanding of the situations in which Stuart found himself and led me to look ahead to what was to come.

After detailing Stuart's ride and the various happenings on his trip that eventually ended at Gettysburg, the authors spend three chapters describing the controversy around Stuart's actions - how it began, continued, and how it still rages to this day. They use excerpts from official reports (some of them are quite long, but add greatly to the text), personal writings, books and other sources. Wittenberg and Petruzzi show how many fellow soldiers at the time criticized Stuart for disobeying orders or seeking glory, but also demonstrate that others defended the cavalry chief, arguing that the cavalier used the discretion that Robert E. Lee had given him and how unplanned circumstances (such as Union Army movements) led him to make the decisions he did.

I like how they show numerous examples from both sides of the dispute, from the time of the war, throughout the rest of the 19th century, into the 20th century and onto today. They do not rely on just one or two sentences for most of these examples either - they reprint enough of the originals to tell clearly how the original writer felt. The book demonstrates how much controversy Stuart's ride created, but that there was (and still is) no clear consensus on who was responsible for Stuart's absence from the side of Lee.
The authors finish the text with a chapter describing their conclusions. They again use numerous examples from various reports and publications over the years and decades to show the arguments being made and they then analyze these reports and their effectiveness. It comes across as a fair and balanced view, and their conclusion is effectively demonstrated by the book's title: Plenty of Blame to Go Around.

After this chapter, they add appendices  that include information about the units under Stuart's command during his ride, the orders of battle for the battles they fought on the ride and Stuart's entire official report of this time period, including the ride, the battle at Gettysburg and the retreat back to Virginia. They end the book with a driving tour of Stuart's ride.

The book does include photographs and maps spread throughout the chapters, which is a fine touch and I enjoyed getting additional tidbits in the notes section as well.

This is a very good, informative, in-depth examination not only of Stuart's ride, but also of its aftermath and the controversy it stirred.  It is well-written, thoroughly researched, and shows why and how Jeb Stuart's ride in the days before the battle of  Gettysburg became so controversial that debate still continues over it even almost 150 years after it happened. I gladly recommend this book.