Well, as I hope that my home internet connection problems are now resolved, I am republishing this entry, with small revisions. I originally posted in September 15, 2010, but the whole pontoon bridge to get men across the Ohio River has been one of the aspects of the Siege of Cincinnati that has fascinated me the most.

In Civil War discussions and blogs, there are many topics that generate excitement and discussion, from causes of the war, to who was right, to why one side won or lost.

One thing that may not, however, seem so interesting, and may, in fact, appear rather mundane, is the role of everyday objects such as bridges. In Cincinnati in late summer 1862, such a topic was anything but mundane and, almost 150 years later, I still find the construction and role of a pontoon bridge to be one of the more fascinating aspects of the "Siege of Cincinnati."

When the Confederate approached the region after the Battle of Richmond (KY) of August 29 and 30,  General Lew Wallace took charge of local defense and declared martial law as he attempted to fortify the existing defenses in the hills of Northern Kentucky. One problem he quickly discovered was in trying to get soldiers from Ohio across the Ohio River into those fortifications. Boats were available to serve as ferries, but this was a slow process, even with the river being rather shallow at the time, due to the drought that hot summer had brought.

In  Our Moment of Glory in the Civil War: When Cincinnati was Defended From the Hills of Northern Kentucky, (reprinted 2007 by the James A Ramage Civil War Museum and the City of Fort Wright) , Chester Geaslen described how General Wallace found a solution to this problem. Wallace

"consulted Cincinnati architect Wesley Cameron on the feasibility of constructing a pontoon bridge across the broad Ohio, by using empty coal barges lashed side by side, and anchored securely onto both shores. Cameron's reply was...'You get me the material and manpower, and I'll get the job done.' He was a man of his word because between the rising of the sun of one day, and its setting the next, Cameron had performed a miracle."

This improvised bridge proved invaluable in the crossing of so many volunteers and so much equipment in so short a time.

Among the units that served in the Cincinnati area, shortly after the panic had subsided, was the 77th Illinois Volunteer Infantry. A couple of years ago, I read an enjoyable book that surprisingly gave me more details on this bridge.

The Civil War Diary of a Common Soldier: William Wiley of the 77th Illinois Infantry, (editor Terrence J Winschel, copyright 2001, Louisiana State University Press) describes that unit's camp in and around Cincinnati, and mentions this bridge on pages 13 through 15. I've left in a couple of sentences before and after the description of the bridge to serve as background information and used bold font for the  mention of the bridge. Crossing that span, especially while trying to convince mules to do the same, must have been an interesting experience.  (The transcription in the book included spelling and grammatical errors as in Mr. Wiley's diary, but I have tried to clean them to make this easier to read.)

Oct 7th (1862)
...We had one team and wagon assigned to each company. Three for the Regt. headquarters and one for the hospital. And our teamsters had a serious time getting their teams broke in as they consisted of wild and vicious mules bought up all over the country and every one that had a mean vicious mule or horse sold them to the government. These mules were corralled on the Ohio side of the river and our teamsters in the first place had to go over to the coral, catch their mules, harness and hitch them to the army wagons [to] get them down through the city and across the Ohio River on the pontoon bridge and out to camp the best way they could. The greater part of the mules were young and had never been handled. A detail of soldiers would be sent over with the teamsters to help them. They would try to get one mule that had been broke for each team for a saddle mule and the balance they would just take whatever they could get a hold of. The greater part of them would just have to be lassoed and choked down until they would get the harness on them. Then they would let them up and get them hitched to the wagons the best way they could. The teams consisted of from four to six mules. When they would get them hitched to the wagons the teamsters would mount his saddle mule and get two or three soldiers on each side to scare them along thus they would go down through Cincinnati to the pontoon bridge which consisted of boats made like very large skiffs anchored in the river about twelve feet apart with timbers laid from one boat to the other and two inch plank spiked onto the timbers. The bridge was twelve or fourteen feet wide with no side railing whatever. The bridge would sway up and down and sideways when the weight would come on it and was not the best kind to drive a big team of wild mules over. But by prodding, whipping, and scaring they would get them forced  onto the bridge and the noise and swaying of the bridge each mule a pushing with all his might for fear of being pushed off the bridge which was at least 80 rods long and then by the same scaring process they would force them out through the town of Covington to camp. They would continue to drive them around until they were tired out before they would unhitch them but the harness was never taken off until they were thoroughly broke. Then they would have to be shod so they could stand the racket over the racks and pikes of Kentucky. This was accomplished by getting them in the stocks and strapping them down so they could do nothing but bray and then the shoes would be fitted and drove."

The Cincinnati Enquirer mentioned this bridge in a couple of its editions.

On September 10, 1862, it informed readers: "It should be understood that the pontoon bridge across the river is only eligible to the military. The guards are continually annoyed by the application of civilians and ladies who are anxious to cross merely, we should imagine, for the novelty of the thing."   It's easy to imagine army officers easily losing their cool as person after person approaches them asking for a special "one-time" favor or an exception to the rules, but it's just as easy to understand the fascination citizens had with it and the curiosity they must have felt about such a strange sight.

On November 7, the paper reported: "The pontoon bridge across the Ohio River to Covington from this city is being removed."  It followed up this report 8 days later, stating that "Mr. Montgomery will sell, this afternoon, all the lumber used in the construction of the pontoon bridge, lately crossing the Ohio River, per order of Colonel Swords."  Unfortunately, the next day's paper was missing from the microfilm roll, so I could not find any details about the sale of this wood.


During this time, a second pontoon bridge was also constructed, on the Licking River, connecting Campbell and Kenton Counties in northern Kentucky.

Soon after the war ended, construction on the John Roebling's Suspension Bridge was completed, at the same spot where the pontoon bridge crossed the Ohio. This new bridge would serve as a model for the much more famous Brooklyn Bridge of later years.  In the illustration at the top of this post, a piling is visible on the far shore. This was from where construction of this permanent bridge had begun before the war. Note that it is on land, but in modern times is now firmly within the bounds of the mighty Ohio.

In 1866, the Roebling Suspension Bridge finally opened after years of political and financial controversy and trouble. Those issues still face the region today as politicians try to find a solution to replacing the aging and over-used Brent Spence Bridge, just west of where the pontoon bridge once stood. No such temporary measure will suffice today. 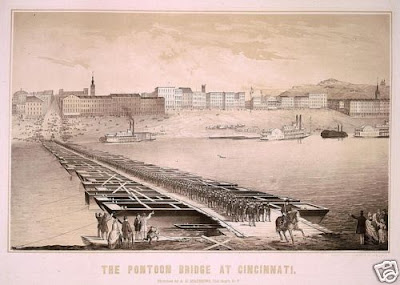