This summer, I found two more ancestors who had served in the Civil War and wrote a couple posts about them. Soon thereafter, I found out some more information about my family history in the war and decided to write about them, but never got around to doing so. Well, now I have organized this new information a bit more and will have at least a couple of posts to discuss some of these ancestors.

Today, I will discuss the Sebastian family. My maternal grandmother was a Sebastian and one thing I learned this year was that a couple of my Sebastian ancestors served in the Kentucky Home Guards (pro-Union).

Lewis Sebastian, one of my third great grandfathers, and his brothers Henderson and Calloway were in company E of a unit called the 3 Forks Battallion of the Kentucky State Troops. It consisted of men from Eastern Kentucky and helped defend against guerrillas and Confederate raiders in the area. (The unit's name is likely a reference to the North, Middle and South Forks of the Kentucky River.)

Eli Mays (or Mayes), Lewis' brother-in-law was also in this battalion.

One site shows that each of my ancestors enrolled in this unit on November 1, 1864 at Crockettsville, Ky., mustered in for one year on February 19, 1865 and mustered out at Irvine, Ky., on July 17, 1865. I am not sure how long this link will work, so I have an attached a couple images from it. 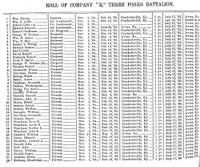 Here is another link with a history of the unit. It includes this mention of my ancestors' company and a fight in which they may have participated.

April 25, 1865: A detachment of Capt. Strong's Co., Three Forks Battallion, under command of Lt. William F. Little "attacked a band of rebels or guerillas, who had formerly been lead by Capt. Martin South, a son of Terry South of your place, after considerable skirmishing the rebels was (sic) driven off but unfortunately Lieut. Lytlle a cousin to the Lieut who was killed was shot through the bowels and is supposed to be mortally wounded. Also a man by the name of Davidson was severely wounded through the thigh, this was all the [loss?] that we sustained. The guerillas lost two killed dead we had no means to ascertain the number of their sounded if any, occurred on Quicksand."

I have some more information on my ancestors and their service, including others who served in the 3 Forks Battalion, and will post it in the future.