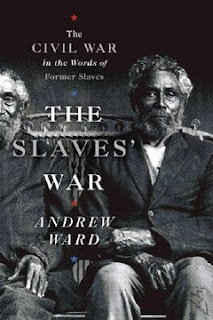 This is a tough book for me to attempt to review. I enjoyed it, but had a lot of mixed feelings and confusion after reading it. That is not due to a poor job by the author; rather that is a compliment to him and the way he portrayed the war years and their effects on slaves and former slaves, and, perhaps is a sign of poor previous comprehension of this era on my part.

This book clearly shows the mixed feelings that existed among the enslaved people throughout the South during the war. Instead of all slaves having automatic happy feelings that a war was taking place, possibly to free them, or being always glad to hear of the approach of Yankees, the book shows that slaves did not know what to expect from the way, or from the invading Northerners. Would this war free them, or just make their masters more strict? Were the Yankees really monsters like some masters said, with horns and tails, and would these creatures take the slaves North and torture them? What was freedom? What did it mean?

Mr. Ward uses quotes from former slaves gathered from many post-war interviews, with hundreds of different people quoted throughout the book. This generally makes it a bit difficult to feel like you can get to know any one of the speakers personally, like a reader may do in many books, but that is offset by the display of so many different perspectives and points of views. Certainly, many slaves were glad to see the Yankees come, hoped for liberation and looked forward to the days of freedom, but many also had contrary feelings, uncertain of what the future held, how the Yankees would treat them or what freedom meant.

For a slave on a plantation to see Northern "liberators" come by and take his masters food, money and possible cause other damage to the land or buildings, it was not easy to accept those men as liberators or heros. Many did not understand such violence, and even opposed such acts.

That is the main point I got by reading the book - the war years (including the time immediately before and after the actual war) were a period of chaos, confusion and uncertainty for the slaves and their opinions, fears, observations, comments, and perspectives show that the coming of the downfall of slavery was not totally a time of joy and high expectations. This book provides an excellent view of what the feelings among the slaves were AT THAT TIME, and shows that what we in the current era may think we know about life as a slave may not be accurate. It is easy today to assume that slaves must have been happy or at least have looked forward to the ending of the peculiar institution, but Mr. Ward's work shows how inaccurate that view, biased with the knowledge that the war ended slavery, really is. People living through the war, without knowledge of the future, were not always as sanguine about that future as we may now assume. Some were hopeful, but many had questions and fears about what was happening.

A lot of it comes down to the fact that, for many slaves, the devil they knew (slavery, their masters, their plantation) was not as scary as the devil they did not yet know (Yankees, the concept of freedom, different responsibilities.) Even today, change can be a scary concept for many people, so to think back about the changes the slaves were seeing makes it more understandable why many were a bit apprehensive about the war and its effects. Few poople today will undergo the radical type of change the slaves had to deal with in that era.

This book is a very unique look at the war years - I do not recall any other using these sources to show this type of perspective, from the people whose lives were so much affected by the events of the early 1860s.

It's not always an easy read and sometimes a bit unsettling (I often found myself wondering why a slave would say something so positive about his/her own master or so negative about the Yankees, due to my previous expectations about what they should think of slavery and freedom - I mean, how could someone be even a bit happy about being owned like an animal - though after finishing the book and thinking it over, I started to understand that better) but it is certainly worth reading and thinking about as it does provide a lot of thought-provoking material and perspectives.