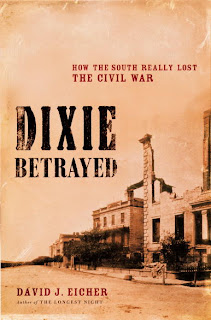 Dixie Betrayed: How the South Really Lost the Civil War is a well-written, enjoyable and smoothly flowing book that is a pleasure to read and that provides a fascinating perspective of the inner-workings of this newly founded government.
Eicher does an excellent job of showing that the Confederacy, at least among  many of its major political, military and civil leaders, was not a smooth-operating, harmonious machine of selfless individuals. The arguments began early, never ceased, and remained to the final, bitter days of this new nation.
Whether it was a general being unhappy with President Jefferson C. Davis, or Davis disagreeing with the Confederate Congress, or the Congress expressing distrust of various generals, discord and disharmony were constants in many (most?) actions of the Confederate government. The numerous times Congress tried to form a Supreme Court - efforts that never came to fruition - the governors who thought that Davis should do less (to preserve state rights, such as Joe Brown in Georgia) or more (to protect their citizens and threatened regions, such as Zebulon Vance in North Carolina), the generals gripping over matters of rank or authority (Joe Johnston, P.GT. Beauregard) - all are examples of the disagreements that dominate this book, showing virtually no "team chemistry" among Southern leadership, as modern sports analysts might term it.
For anyone who thinks all Confederate officers and officials were operating with a common mindset and motivation in order to reach a common goal, Eicher's work shatters such thougths.
Regarding the subtitle, How the South Really Lost the Civil War, however, this work seems to fail to connect all this disaffection with the final results. There clearly is a lot of bickering going on, but how did it affect the actual war? I did not really see an answer to that question.
The only parts of the book that came close to to answering that question occurred on pages 219-220 and 249-250 when the subject of using African-Americans, either free or enslaved, in the army, either as laborers or soldiers, was discussed. The book did mention the Confederate shortage of manpower, but the Confederates never were able to agree to a plan to use this possible supplemental force, until it was way too late. I thought these mentions were good hints at how such indecision and squabbling affected the army and potentially the war's outcome, and further discussion on these proposals and the lack of manpower would have been very appropriate.
I also felt that was the kind of analysis missing from most of the rest of the book. Clearly, the Confederates spent lots of time discussing a possible Supreme Court, and never reached an agreement, but did that indecision help lead to their ultimate downfall? The closest answer I found came on the front inside section of the dust jacket, where it claims that such arguments were "squandering time that would have been better spent on making certain that troops were well fed." I did not see similar conclusions within the text of the book.

One other small question I had concerned the absence of any discussion of the Richmond bread riots, showing unrest among citizens as well. Eicher did discuss how Richmond residents were unhappy with what they perceived as a military state under General John H. Winder, but the only mention of that famed riot was in the section of photographs, by a picture of Richmond mayor Joseph C. Mayo. I feel this is an incident that would fit in well with the rest of the book, but that's just an opinion and I can understand how someone might not fit that in with all the governmental squabbling.

Despite those questions,  however, I really enjoyed the book and recommend it for those interested in the workings of the Confederate government, or even those who want to see how the concept of states rights could affect the national leaders. The photographs of various Confederate leaders were very helpful, and the captions by them were more in-depth than the usual one line or simple identification that most books use. The writing is not difficult to read, and the examples of how much discord there truly was are clearly well-researched.