Off Topic: 1844 Description of Kentucky

I know this is a bit off topic of the Civil War, but I thought it was an interesting look at my native state just a few years before that war, right as the Mexican War was coming along. Much agitation about slavery was to follow in the years between the publishing of this book and the firing at Fort Sumter. I figured this was as good a place as any to share this summary.


Regarding Kentucky's western boundary, I can only surmise that the author started to type Missouri, got distracted and ended up moving Mississippi a few hundred miles north by mistake. I'm surprised that did not get caught in editing or proofreading.

A Universal History of the United States of America, Embracing the Whole Period From the Earliest Discoveries to the Present Time.


p. 459 – Chapter XVIII – A Review of the Progress of the Western States, from their formation and adoption into the Union as Independent States, down to the present time

Kentucky was adopted into the Union, and held an independent station among her sister states, in 1792. Col. Daniel Boone, with some of his friends, explored these parts in 1769; he continued in the vicinity of Kentucky until 1771, when he returned. But in 1773, he, with his family, together with five other families, and forty men, left Powell's valley, so called, and after many accidents and detentions, reached Kentucky River, in March, 1775, where they immediately commenced a settlement. In 1778, 1779, and 1780, a large number of persons emigrated (sic) to this territory; but their distresses were so great, occasioned by cruel treatment from the savages, and scarcity of provision, that they were on the point of abandoning the enterprise. But Gen. Clark soon after subdued the Indians, and laid waste their villages, which gave security to the settlers, and the settlement continued to advance.

Rivers – The River Ohio washes the northwestern side of Kentucky. Its principal branches, which water this fertile tract of country, are the Sandy, Licking, Kentucky, Salt, Green, and Cumberland rivers. These again branch in various directions, into rivulets of different magnitudes, fertilizing the country in all its parts.

Kentucky River is very crooked, and after running a course of more than 200 miles, empties into the Ohio.

Salt River rises at four different places, near each other. The windings of this river are very curious; the four branches, after a circuitous course round a fine tract of land, unite; and, after running about 15 miles, empty into the Ohio, 20 miles below the falls. Its general course is westward, its length 90 miles, and at its mouth is 80 yards wide. Green and Cumberland Rivers are of considerable note; and all the above rivers are navigable for boats almost to their sources. The banks of the rivers are generally high, and composed of limestone. Limestone is very abundant in this state, and commonly lies about six feet below the surface, except in valleys, where the soil is much thinner.

Springs – There are several salt springs in this state, from which large quantities of salt is manufactured. There are numerous mounds and ancient fortifications; also many caves; a very large one, near Green river, has been explored to the distance of 10 miles. Large quantities of saltpeter (sic) are manufactured from the earth which is gathered at the bottom of these caves.

Face of the Country, Soil and Productions – A tract of land, about 20 miles wide, along the Ohio, is hilly, and broken; it is interspersed with many fertile spots. The rest of the country is agreeably uneven, gently ascending and descending. The soil on these agreeable ascents, (for they cannot be called hills,) is sufficiently deep as is evident from the size of the trees; the soil is of darkish complexion.

In many places, there are appearances of potter's clay and coal in abundance. The land east of Nolin Creek, a branch of Green River, is, in general, of an inferior quality; but the banks of Green River afford many desirable situations.

Towards the head waters of Kentucky River, which interlocks with the waters of Cumberland and Sandy Rivers, the country is broken and mountainous.

Elkhorne River, a branch of the Kentucky, from the southward, waters a country fine beyond description. The country east and south of this, including that situated at the head waters of Licking River, in the vicinity of Hickman's and Jessamine Creeks, and the remarkable bend in Kentucky River, may be called an extensive garden. The soil is deep and black, and the timber large. On this fertile tract, and on the Licking and head waters of Salt River, are the places on which most of the early settlements were made.

Dick's River runs through a great body of first rate land, and affords many mill seats. Near the head of Salt River the land is good, but low and unhealthy.

The country is generally well timbered; of the natural growth, we may reckon the sugar, the coffee tree resembling the black oak, the hackberry, and the cucumber tree. Such is the variety and beauty of the flowering shrubs and plants which grow spontaneously in this country, that in the proper season, the wilderness appears in full blossom.

The accounts of the fertility of the soil have, in some instances, exceeded belief, and probably have been exaggerated. That some parts, particularly the high grounds, are remarkably good, all agree; large quantities of wheat and corn are raised, and more or less of rye, barley, oats, flax, hemp, and abundance of all kinds of vegetables, but very little is done with cotton; tobacco is brought to perfection. Swamps are rare in Kentucky; and, of course, the reptiles which they produce, such as snakes, frogs, &.c., not numerous.

The Climate is healthy and delightful; some few places, in the neighbourhood (sic) of ponds and low grounds, excepted. The inhabitants do not experience the extremes of heat or cold. The winter season is generally mild, and of short duration; snow seldom falls, and lies but a short time.

The Chief Towns, are Frankfort, Lexington, and Louisville. Frankfort is the capital of the state, and seat of justice for Franklin County; it is regularly laid out on the east side of Kentucky river, sixty miles above its confluence with the Ohio, 27 miles west-northwest of Lexington, 51 east of Louisville, and 102 south-southwest of Cincinnati. It contains a state house, 86 by 54 feet; a court-house; a penitentiary, containing from 80 to 130 convicts; a jail, academy, market house, and several printing offices, manufactories, &c. The site of the town is a semicircular alluvial plain, from 150 to 20o0 feet lower than the table lands in its rear. The river here is about 80 yards wide, and after heavy rains frequently rises 60 feet. Opposite Frankfort, and connected with it, is South Frankfort, which is rapidly increasing. Steam-boats of 300 tons burthen come up the river as far as this place, when the water is high. Most of the foreign goods consumed in Kentucky are landed here and at Louisville.

Lexington is the capital of Fayette county; it is situated in a beautiful valley, on Town Fork, a small stream which falls into the south branch of Elkhorne River, 25 miles east-southeast of Frankfort; it is regularly laid out, and contains a court-house and other public buildings. The growth of this town has been exceedingly rapid. In 1797, it contained only about 50 houses; it is now a large and beautiful town, covered with stately and elegant buildings, an, in point of wealth and refinement, is surpassed by few places in the western country. The country around Lexington is much admired for the beauty of its scenery, and is adorned with many handsome country seats.

Louisville is pleasantly situated on an elevated and beautiful plain, on the south bank of the Ohio, immediately above the rapids, 120 miles below Cincinnati. It contains very handsome public buildings, and large manufacturing establishments are employed in this place. The business of this town has increased astonishingly within a few years; a large number of steam boats are employed in its commerce.

A stranger travelling through the state of Kentucky will meet with frank and cordial hospitality. The people are high minded, and possess a noble character. They are in a condition in life, which is, perhaps, best calculated to develope (sic) high mindedness and self-respect. We may find in this state, among the lower classes, ignorant, abandoned, and savage men; but we discover the same in every portion of the Union. Mostly, however, they are courageous, generous, and frank. The peculiar circumstances they were placed under in the last war, show that they only want incitement to display all that is noble in a people.

Curiosities – The banks, or rather precipices, of Kentucky and Dick's River are to be reckoned among the natural curiosities of this country. Here the astonished eye beholds three or four hundred feet of solid perpendicular rock, in some parts of limestone, and in others of a fine white marble, curiously checked, with strata of astonishing regularity.

Caves have been discovered in this country of several miles in length, as before mentioned. Copperas and alum are among the minerals of Kentucky. Near Lexington, are found curious sepulchers full of human skeletons. It has been asserted, that a man in or near Lexington, having dug five or six feet below the surface of the ground, came to a large flat stone, under which was a well of common depth, regularly and artificially stoned.

Other states discussed in the chapter of "western" states include Tennessee, Ohio, Indiana, Illinois, Missouri and Michigan. 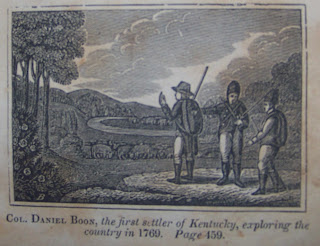 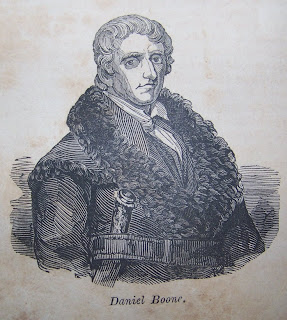