From the February 28, 1863 edition of Haper's Weekly Journal of Civilization, I found the following article and picture about this species of Northern war opponent. Readers are familiar with the term "Copperhead" and that group's general policies, but I thought that this article with a period description of it was very interesting.

First, here's an illustration that appeared on page 144, the back cover of that week's edition. 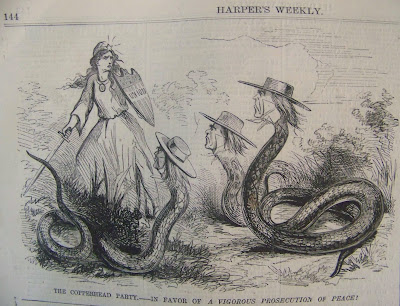 Here is the article as it appeared on page 130.


COPPERHEADISM
Mr. Clement Vallandingham, member of Congress from Ohio, made a speech last week in which he avowed himself a "Copperhead." Certain editors nearer home have likewise rejoiced in the title. It becomes interesting to inquire what it means, and how it came to be applied to a class of politicians.

A "copperhead," according to the American Cyclopedia, is "a venomous serpent...the head is thick...the neck contracted, and its scales smooth; there are no rattles, the tail being short...near the flanks are rounded dark blotches...it prefers dark and moist places...It gives no warning of its proximity...feeds on mice, small birds, etc., and seldom attacks man... it is slow and clumsy in its motions, and a very slight blow suffices to kill it...It is also called 'chunkhead' and "deaf-adder.'"

It can not be denied that the analogy between this loathsome creature and the mean, sneaking politicians who are now distracting the Northern mind with cries of  peace is quite striking. Like the copperhead, the peace party are "venomous" in their attacks on the nation; like it, their "head' is undoubtedly "thick;" like it, their "neck" and reach are "contracted." Their  "scales," too, are "smooth;" and they have no rattles to warn the honest traveler of their insidious approach. Like the copperhead, their character is "stained by dark blotches;" and , like it, they "prefer dark places" to the light of day. Like that sneaking reptile, their prey is "small, feeble creatures;" and they "seldom venture to attack a man." If we add that our political Copperheads, like their reptile type, are so "slow and clumsy in their motions" that they deserve the additional cognomina of "Chunkheads" and "Deaf-adders," and that "a very slight blow" makes an end of them, we shall have made the analogy complete. It is creditable to the discernment of our Western fellow-citizens that they so quickly realized the resemblance between the copperhead snake and the peace politician, and baptized them by one common appellation.

We shall not waste time in arguing with the Copperheads. Men who are capable of justifying the rebels and espousing their cause when the blood of some member of almost every Northern family reddens Southern soil, and the bones of Northern soldiers are worn as ornaments by Southern women, are not likely to be convinced by argument, or to be pervious to any thing short of a bayonet thrust.

But one suggestion we will make. If Mr. Vallandingham, or any of his fellow-copperheads, will visit any large camp of loyal troops, either in the East or in the West or in the South, and will, in presence of the soldiers, express the sentiments they have uttered at Newark, new York, and elsewhere; and if, without the protection of the generals and provost-marshals, whom they so heartily abuse, they succeed, after delivering their speech, in making their escape alive, and without a coat of tar and feathers, we shall agree that Copperheads may fairly be tolerated. Our soldiers are anxious to have the challenge accepted.