While looking through a copy of the February 28, 1863 edition of Harper's Weekly: Journal of Civilization I found this brief article about artist T. Addison Richards, an English-born artist who lived in Georgia for years before moving to New York City.  He apparently created many paintings of various scenes of the south he viewed in his travels, including working with his brother on a collection of engravings of some of his work, which they called Georgia Illustrated.

His obituary provides some more information about his life and his more notable paintings, and a google search for his name will bring up many links to views of his artwork, or even examples of it currently for sale.

One thing I did not find out about him was his political preferences during the war. He stayed in New York during the war years apparently, so it seems like he may have supported the Union over the Confederacy, despite the years he lived in and the work he did about Georgia and the south. Or maybe he had no major preference, but stayed in New York for its business climate and his potential for business success instead of any major political feelings.

Here's the brief article that Harper's Weekly printed on his activities at this point in the war.  I do find it curious that they would print what is basically an advertisement for his art sale, but that was part of the journalism business of the day, especially with someone who apparently had earned at least some fame. Free publicity for such an artist must have been helpful for business.

In these sober times the painters are still busy in their studios, and it is a curious relief from the stern excitement of the war to step into their quiet rooms and see the tranquil streams, meadows, grazing cattle, and hazy mountains. Mr. T. Addison Richards, the artist and well-known Secretary7 of the National Academy, proposes a sole of some of his paintings, sketches, and studios - landscapes, fruits and flowers, to the number of about 150, at the Derby Gallery on the 24th of February. The visitors to the annual exhibitions need no introduction to his  name; and we hope that every landscape in the collection will prove to be the site of a gold mine, and that every placid stream may be covered with that choicer game than canvas-backs, green-backs.

Here is a picture of his painting Summer Sunlight, courtesy of Askart.com 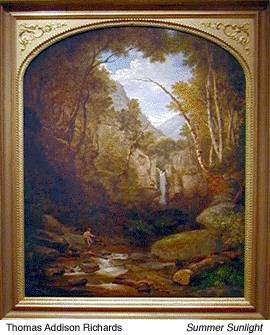