I recently found an obituary published in the form of a four page pamphlet,  by the Military Order of the Loyal Legion of the United States  (MOLLUS) for William Starling, an Ohio native who served in the Civil War. He was born on January 25, 1839 in Columbus, Ohio and passed way on December 10, 1900, at the age of 61, in Greenville, Mississippi. 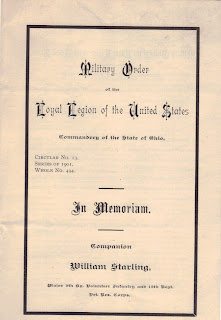 Below, I reprint the biographical information published in this obituary.


Our late Companion, William Starling, was descended from one of those pioneer families, which played a distinguished part in the early settlement of Kentucky. His father, Col. Williams Starling was a native of Franklin County, Ky., and his mother was a daughter of Judge Samuel McDowell, of Mercer County, Ky., who was president of eight of the nine conventions held in Kentucky preparatory to its admission into the Union, and Marshal of the U.S. District of Kentucky from 1789 to 1801.


His father went to Columbus, then a small village, to look after teh interests of his uncle, Lyne Starling, who owned most of the land on which the city was subsequently built, and during his father's stay there, our late Companion was born.


He attended the University of New York where he graduated in 1856 with honors, having the philosophical oration and obtaining the degrees of A.M. and C.E. from that institution. He entered upon his profession as Civil Engineer soon afterwards. Just before the outbreak of the Civil War, he came to Frankfort, Ky., where his parents then resided. Upon the organization of the Third Kentucky Cavalry, commanded by Colonel after-wards Brigadier General James S. Jackson, he was appointed First Lieutenant in Company G of that regiment, and in May following, was promoted to Captain Company C, Ninth Kentucky Infantry. On May 18, 1863, was promoted to Major of his regiment, and on December 20, 1863, was transferred to the Veteran Reserve Corps. During the greater portion of his service he was on staff duty as Chief Engineer of Crittenden's, after-wards Van Cleve's Division. At the battle of Stone River, he was severely wounded, and on his recovery was on Court Martial duty at Louisville, till he resigned in September, 1864. In all of his military service he gained the approval and confidence of his commanders.


After the war, he resumed the practice of his profession, but in 1870 was engaged in cotton planting in Arkansas, near Greenville, Miss. His professional interest was aroused by the problem of controlling the Mississippi floods, and during a vacation, after some time spent in the study of the Dutch language, he visited Holland to examine the dike system of that country. On his return, he published a volume entitled, "Some Notes on the Holland Dikes," for which the Society of Civil Engineers gave him a gold medal. He was subsequently appointed Civil Engineer of the Mississippi Levee District, and constructed the works that have protected the Yazoo delta and brought it under cultivation. For a short time in 1898, he had charge of a levee district in Louisiana. Some time before his death, he was appointed by the President, a civilian member of the commission to report on the improvement of the Southwest Pass of the Mississippi, and appointment highly complimentary to his professional standing and to his special knowledge on the subject of  river control.


Companion Starling was devoted to his profession, and an industrious writer on professional subjects. Besides the work on the Holland Dikes, mentioned above he wrote monographs on the Improvement of the Mississippi River, The Discharge of teh Mississippi River, The Floods of the Mississippi, and a number of shorter articles on similar subjects. At this death, he left the complete manuscript of a work that is soon to be published.


Companion Starling was never married; of his immediate family a brother and two sisters survive him.


Professionally, a competent authority says that Companion Starling was regarded as one of the most thoroughly informed and efficient officers in the Engineer Service.


In all his personal and social relations, he was admirable, kindly, considerate, a thorough gentleman always, a brilliant and entertaining conversationalist and a most genial companion; he was popular with all, and most admired and loved by those who had the best opportunity to know him.

Here's a link to another obituary, from Google books, which points out that this Northern soldier had earned appointment as Chief Engineer of the Mississippi Levee district, winning the job over two competitors who had been former Confederate soldiers. It lists his date of death as December 11, 1900 instead of the 10th as the pamphlet I have shows.

I did find one website with some information about the 9th Kentucky Infantry. It appears to be the same information available at the National Park Service's Civil War Soldiers and Sailors  site, but this site is a direct link. The 9th Kentucky served in the Western Theater, throughout Kentucky, Tennessee, Mississippi and Alabama. It was in Nashville, and  saw action at Shiloh, Corinth and northern Alabama, before being part of the pursuit of Bragg's Army, after which the 9th ended up in Louisville, Ky, before being part of Buell's unused reserves at the Battle of Perryville. This unit  eventually returned to Nashville, then participated in the fight at Murfreesboro (Stone's River) where Starling was injured and his active field service came to an end.

MOLLUS, it's official website linked in the first paragraph above, was an order established in 1865 for officers of the Union Military forces who had fought in the Civil War.