I had not planned to make this entry, but the Cincinnati Enquirer today published a good description of the "Siege of Cincinnati" that I mention frequently and I found it to be worth sharing.

It is somewhat surprising that the Confederates did not make a more serious attempt to attack Cincinnati during the war, as it  was quite an important city at the time, and the Ohio River was a major transportation route. It was, however, far enough north to be a difficult challenge for the southerners to undertake, and after Heth and his men saw the fortifications that had been built by the time of their approach in September of 1862, they knew a successful attack would not be easy. The bend in the Ohio River, the hills of Northern Kentucky and the skills of U.S. Engineers like Charles Whittlesey and James Simpson combined to create a strong line of defenses.

Within a few weeks of this threat, a major battle took place a few hours south of Cincinnati,  at Perryville and soon after that fight the Confederates would leave the Bluegrass State, virtually for good. Despite later raids by men such as John Hunt Morgan and the grandiose late 1864 dreams of John Bell Hood,  no major Confederate force ever remotely approached Cincinnati again. 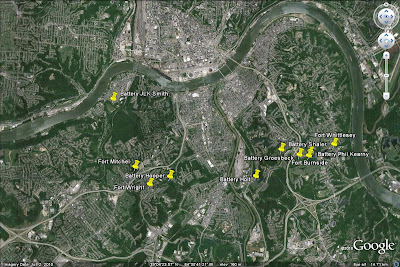 The above image from Google Earth displays my attempt to show the general outline of where the defenses of Cincinnati were. This, of course, is a modern image, but the path of the Ohio River is fairly obvious as it winds its way towards a meeting with the "father of all waters." The yellow pins represent my understanding of where, amongst the modern sprawl, the fortifications were located. I know they are not exact and there were more than I have pinned so far (plus 2 north of the river) but I think this image provides at least a basic bird's-eye view of the how the shape of the river, the topography of Northern Kentucky and the man-made defensive positions worked together to make this a formidable position, almost a "ring," especially for a force as small as Henry Heth's (estimated from 6,000 to 8,000 men.)

The small, dark north/south line almost exactly in the middle of the page is the Licking River, which runs from southeastern Kentucky and empties into the Ohio River across from Cincinnati. (One of Cincinnati's early names was Losantiville, meaning "across from the Licking.") It divides Campbell County (on the right) and Kenton County (the left) in this image, and for an aggressive attacker, this small river could have served almost as a driveway straight into the heart of the defensive lines, but the engineers knew that and designed some of the positions, including Battery Hooper, to overlook this river and the valley it carved out along its route. If anybody gets the opportunity to visit the Ramage Museum, the view from the front yard, where Battery Hooper once stood, is of this valley and is quite spectacular at times. That type of view makes it seem obvious why the engineers put the batteries where they did. The below image shows a slightly zoomed-in view during the middle of summer. 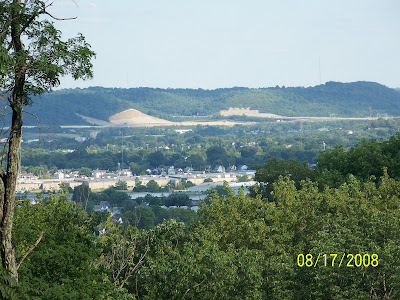