Book Review: The Siege of Washington 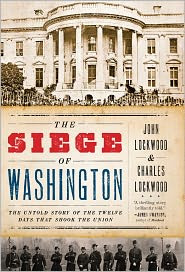 The Siege of Washington: The Untold Story of the Twelve Days that Shook the Union
by John Lockwood and Charles Lockwood
copyright 2011
Oxford University Press

In many overviews of the Civil War, the days immediately after the firing on Fort Sumter and President Lincoln's call for 75,000 volunteers are frequently described as being chaotic and full of uncertainty. The lack of defensive preparations around Washington is a frequent topic and these descriptions will almost certainly mention the attack on the 6th Massachusetts troops in Baltimore and how the North had to find an alternate route for troops to get to Washington. After maybe a few more brief words, these books or articles then quickly move on to other topics without much detail about that time period around the seat of American government.

The Siege of Washington shows that to be a mistake, as it describes the situation in the nation's capital during the twelve days following Lincoln's proclamation, giving details of the mood of people in the city, including government officials, and showing just how ill-prepared the city was to defend against a possible attack.

The book is well-written and well-organized, with chapters for each of the 12 days the authors describe. They mention what happens on each day as well as what people expect or fear may happen. After several days of expecting reinforcements to arrive or secessionists to attack (or both), the tension builds within the people left in the city and this book does a fantastic job of showing this through the use of newspapers, diaries and letters from the time.

They do not just discuss Washington, though. They show the tension experienced by troops trying to get to the capital; they discuss southern plans and hopes for a possible capture of Washington; and they show how concern about Washington was growing throughout the North. The authors do a fine job of going back and forth among these localities and people, showing each side of the story. For the southern perspective, they show both official correspondence and thoughts of government officials in Maryland, Virginia and the Confederacy, as well as comments and hopes from those without official position but who express their thoughts, hopes and plans for the "siege of Washington." Henry Wise is a frequent example of this group. (Similar sources are used for the Union perspective as well.)

This book is a pleasant read, thanks to the writing style of the authors and provides some good details on a frequently overlooked side of the early days of the Civil War.