Rebel Barbarity in Southern Prisons, an article from the Youth's Companion

Here is an article from the Youth's Companion of December 10, 1863. It is, perhaps, mostly a propaganda piece, but, even if so, it serves as an example of how reports of southern treatment of northern prisoners spread throughout the north, even among papers like this one, which included children among its audience. Note also that this was written in December 1863, and the most notorious of all Rebel prisons, Andersonville, did not open until a couple months later, in early 1864.

Probably all the readers of the Companion have heard of the cruel treatment received by United States' soldiers in the Libby and other prisons in and about Richmond. There is no doubt that the most harrowing accounts fall short of the reality. Stories come in to us, authenticated by the bloodless lips of famished men, portraying the horrors of rebel dungeons, and the cruel malice, born and nurtured of barbaric customs, wreaked upon defenseless prisoners, sufficient to make even the boldest rebel sympathizer blush with shame and loathing. Our noble soldiers have endured in vile Southern dens the extent of human woe. They are the real heroes of our nation.

Our engraving this week pictures the appearance of United States' prisoners, in hospital, who have recently been released from Belle Island. With some of them life was nearly extinct; many were too far gone to understand they were at last among friends, and died unconscious of the comforts surrounding them, exclaiming, "I am too tired, - something to eat - what torment!" Others, writhing and moaning in agony, lingered on a few days, accepting gladly the longed-for food, offered too late. Their weakened systems rejected even the slightest nourishment. The death-seal was upon their brows ere they left the prison where for months they had lingered in slow torture. The sand had been their bed in sun and rain, through cold and heat. It had been their only protection, almost their only covering. Of one hundred and eighty prisoners landed at Annapolis from Richmond about a month ago, fifty-three died in less than one week, victims to ill-treatment and actual starvation endured during their imprisonment.

Our readers may thus learn how their brothers and friends are slaughtered in Southern slave pens. No false delicacy should prevent the presentation of the whole truth. All the world should know that boasted rebel civilization is the cruelest barbarism, and that the grosest (sic) brutality must be expected of a people educated under the debasing influences of slavery


Here is a link to more information about Libby Prison and a photograph of that prison from the Library of Congress. 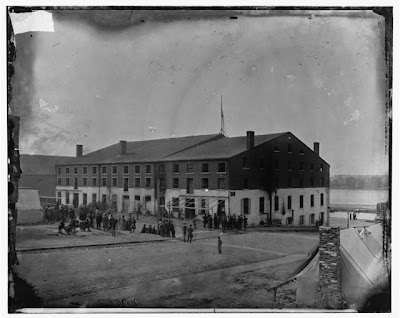