Book Review: Faces of the Confederacy 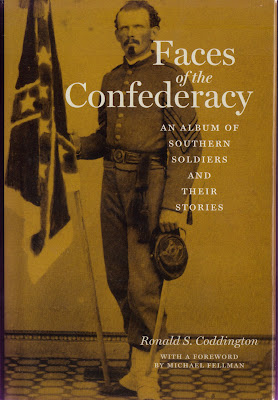 Faces of the Confederacy: An Album of Southern Soldiers and Their Stories
by Ronald S. Coddington, forward by Michael Fellman
copyright 2008, The Johns Hopkins University Press

The carte-de-visite was a popular form of photography during the Civil War era and Ronald Coddington takes advantage of it in this volume, the follow up to his Faces of the Civil War: An Album of Union Soldiers and Their Stories (which I have not yet read.)

He searched various collections, of private individuals and public institutions to find these CDVs. His criteria included the condition of the card as well as it having the identification of the soldier pictured on it. He then researched the lives of these dozens of men and put together brief biographies of their lives, in and out of the war.

This is a very fine and enjoyable compilation. Putting names to these old pictures gives them extra meaning and the information he uncovered about each was a great addition, almost bringing these men back to life again.

Mr. Coddington, who also publishes the blog Faces of War, did not simply find pictures of the most famous Confederate soldiers he could find and repeat information familiar to many Civil War enthusiasts; he specifically chose to focus on soldiers below the rank of colonel, i.e. the rank and file of the army, most of whose names are unknown to all but a select few. This makes the book even more valuable, providing insights into the typical soldiers who did not benefit from the privileges of holding a high rank - these were the men who carried out orders, who marched from battlefield to battlefield and who slept in tents and on the ground, whether wet or dry, hot or cold.

I really enjoyed this book. It is well-written and moves quickly from one portrait to the next. It is a very fine volume and I do now want to get its precursor and read about the "common" Union soldiers Mr. Coddington profiled.

It is organized chronologically, based on the event that he describes for each soldier, from the start of the war to the end, and the preface, endnotes and references all are beneficial to this book, especially the endnotes, many of which include interesting further tidbits about these men.

Faces of the Confederacy  is an informative, enjoyable look at some of the "common soldiers" of the Confederacy, putting names with faces, and faces with their lives. It not only preserves the memory of these specific individuals, but also shows the human side of the war and the impact it had on these men and their families. It is a fine book and I do recommend it to anyone interested in the Civil War.