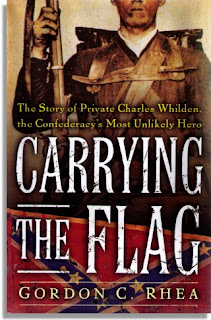 In this fine narrative, Gordon C. Rhea describes the life story of a truly "common" Confederate soldier, with the battles and campaign that gave him the chance to go from "ordinary" to "hero" in a matter of minutes.

Writing in a style of a story teller, Rhea tells of the frustrations that Charles Whilden experienced for much of his life, including in the early 1860s when his health issues kept him from being accepted into the Confederate Army. Whether at home in Charleston, in Detroit or in New Mexico, Whilden struggled to achieve success, personally (he never married, and racked up various debts) and professionally (not finding a satisfying job that rewarded him financially.) Eventually, Whilden got his break when Confederate manpower shortages allowed the 1st South Carolina Regiment to accept him into their ranks.

Rhea uncovered many sources to describe Whilden's life, and the regions in which he lived, and combined that with his knowledge and research of  two early battles in the 1864 Overland Campaign that exposed Whilden to the so-called "glories" of war, the Battle of the Wilderness, and the Battle of Spotsylvania. Rhea describes how the armies approached each other and met in ferocious combat in both battles, describing the intensity of the fighting and suffering the men did. He paints a grim picture of these early May days, in both locations, describing the sights and sounds that men like Charles Whilden saw and heard. The vivid descriptions of these scenes do a terrific job of letting the reader understand - as much as we can - the type of horror these men experienced.

I will not describe in this review the actions Whilden took to earn the name hero, as Rhea does that in the book much better than I can, but the story he tells is one I'm glad to be familiar with now and one that I certainly recommend others read. Even seemingly small steps can lead to big accomplishments and inspire other people. (Granted, the title of the book does give a big hint about Whilden's actions.)

I do wish the book had included some illustrations or photographs and maybe a couple more maps. It did have one map each of the Wilderness and Spotsylvania at the front of the book, but some more detailed images of the areas would have been nice, especially later in the book when actions in these areas were being described.

Despite that minor criticism, I found this to be a very enjoyable, readable book that tells a wonderful story, illuminating a small, heroic-yet-unknown action that took place during one of the more terrible blood-lettings of the war. How many more heroes like Whilden made such courageous moves during the war, only to have their actions disappear into the fog of time and history? We may never know, but thanks to some surviving family papers, and Gordon Rhea's research and writing abilities, we can know realize and appreciate what Chalres Whilden did and the courage he showed in that one moment in May of 1864. This book does fine justice to Mr. Whilden's bravery.