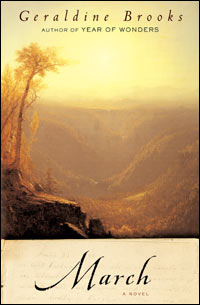 I readily admit I am not really a fan of fiction, even historical fiction, but I read this book as part of a Civil War discussion group at a local library.

The author chose as the main character the father from Louisa May Alcott's Little Women, a book I have heard about but never read. I personally wonder why an author would use another author's character, even one that apparently had not been deeply developed in the original work, instead of coming up with his or her own subjects, but perhaps that is due to my lack of experience in this genre. She used aspects of the life of Alcott's father to help flesh out the character of Mr. March.

With my lack of reading fiction in recent years, I also do not really know how to review such work, but will give a few words here.

I thought this was a decent book - not great, but not bad. There were times when I got into it quite deeply and did not want to put it down.

The story is told from the perspective of Mr. March, almost auto-biographically, except for a section at the end told from h is wife's view. It goes back and forth from experiences he had prior to the Civil War, to the War itself for most of the book, until the ending, which describes his return home.

The author does appear to have done a lot of research on the scenes from the war as well as the homefront, which is something I may not appreciate enough about writers of fiction.

I found it interesting that she touched on the current hot-button topic of "black Confederate soldiers" in a way, describing the sons of a freedman voluntarily serving the Confederacy with their masters, and even taking part, apparently very happily, in a raid on the land where the freedmen were raising cotton. She never uses terms such as "black Confederate soldiers" but the descriptions of their attitudes make it seem like they were willingly serving the Confederate cause and behaving like soldiers (though these characters were kind of a side-plot and she did not describe how they behaved outside of the chapter about their raid.)

March also explores the relationship between Mr. March and a slave woman named Grace, whom some in my discussion group said represented Louisa May Alcott, at least partially. It describes March's life, his experiences with a slave owner and slavery, as well as his feelings of seeing Grace whipped after he had attempted to teach another young slave girl to read.  March was an abolitionist and even an idealist, but had to adapt to a reality - both in the scene of the whipping and later during his work on the land where the freedmen raised cotton - that was not always ideal. His struggles to match his ideals and what was really happening make up much of the story.

Again, I thought this was a fairly decent read.  It was a book from the library and is not something I will purchase for my own collection, but I am somewhat glad I went out of my own comfort zone to read this style of writing and to see that historical fiction is not simply an author making up anything and everything to fit his or her own whims - or at least it does not have to be so.

I still greatly prefer non-fiction but am now less certain about my stance on fiction. Perhaps it has more importance and can be more informative than I had realized, especially in the area  of historical memory and perception. This may be something I ponder more often now, thanks to my reading of this book.