A Patriotic Member of Congress 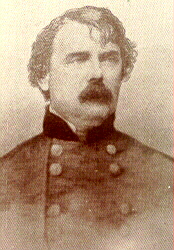 Here's a story - sarcastic headline and all - found in the Covington Journal of January 11, 1862.

[From the Philadelphia Inquirer.]
A Patriotic Member of Congress

James S. Jackson, M.C. from Kentucky, writes that he will not be here to  take his seat in Congress this winter, unless such a calamity should befal the patriots of Kentucky as to have an order issued by the War Department for the army to go into winter quarters. Should the war go on, he will not be seen in Washington so long as there remains a single rebel in Kentucky. - He is out of money, has received no pay for his services in the army, and has sent here to collect some that is due him, and to draw his pay as member of Congress.


Col. Jackson has not taken his seat at the present session of Congress, and yet sends on for his pay both as a Colonel and a member of Congress. This is accounted patriotism. If drawing pay for imaginary services is an evidence of patriotism, a fair case is made out. If not, not.


Either of the positions held by Colonel Jackson would satisfy the ambition of most men. In truth there are few men qualified to fill them both at one and the same time. - We have no mean opinion of the ability of Col. Jackson, but at the same time we believe the country would not lose anything if he were to resign one of the important positions he now holds.


Here is a previous post I wrote about him.  It looks like he had already resigned from Congress when this article was published, but perhaps had hoped to gain back pay from his elected position or maybe it was just a case of news traveling slowly.