The May 2012 edition of National Geographic  takes a look at some of the artists who created sketches and other drawings during the Civil War, often times putting themselves in dangerous situations. See below for an excerpt from this article, the full version of which can be found by following this link

Thanks to folks at the magazine for also supplying both of the images seen below the excerpt, including the current magazine cover.  See this link of more views of scenes as these artists sketched them.

At the time of the Civil War, camera shutters were too slow to record movement sharply. Celebrated photographers such as Mathew Brady and Timothy O’Sullivan, encumbered by large glass negatives and bulky horse-drawn processing wagons, could neither maneuver the rough terrain nor record images in the midst of battle. So newspaper publishers hired amateur and professional illustrators to sketch the action for readers at home and abroad. Embedded with troops on both sides of the conflict, these “special artists,” or “specials,” were America’s first pictorial war correspondents. They were young men (none were women) from diverse backgrounds—soldiers, engineers, lithographers and engravers, fine artists, and a few veteran illustrators—seeking income, experience, and adventure.
It was a cruel adventure. One special, James R. O’Neill, was killed while being held prisoner by Quantrill’s Raiders, a band of Rebel guerrillas. Two other specials, C. E. F. Hillen and Theodore Davis, were wounded. Frank Vizetelly was nearly killed at Fredericksburg, Virginia, in December 1862, when a “South Carolinian had a portion of his head carried away, within four yards of myself, by a shell.” Alfred Waud, while documenting the exploits of the Union Army in the summer of 1862, wrote to a friend: “No amount of money can pay a man for going through what we have had to suffer lately.”
The English-born Waud and Theodore Davis were the only specials who remained on assignment without respite, covering the war from the opening salvos in April 1861 through the fall of the Confederacy four years later. Davis later described what it took to be a war artist: “Total disregard for personal safety and comfort; an owl-like propensity to sit up all night and a hawky style of vigilance during the day; capacity for going on short food; willingness to ride any number of miles horseback for just one sketch, which might have to be finished at night by no better light than that of a fire.”
In spite of the remarkable courage these men displayed and the events they witnessed, their stories have gone unnoticed: Virginia native son and Union supporter D. H. Strother’s terrifying assignment sketching the Confederate Army encampments outside Washington, D.C., which got him arrested as a spy; Theodore Davis’s dangerously ill-conceived sojourn into Dixie in the summer of 1861 (he was detained and accused of spying); W. T. Crane’s heroic coverage of Charleston, South Carolina, from within the Rebel city; Alfred Waud’s detention by a company of Virginia cavalry (after he sketched a group portrait, they let him go); Frank Vizetelly’s eyewitness chronicle of Jefferson Davis’s final flight into exile.
-- 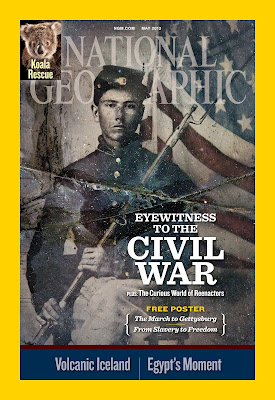