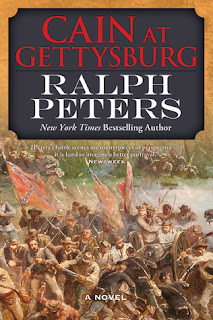 A few weeks ago, I mentioned the possibility of trying to read more Civil War fiction, in order to try to gain a different perspective on the war and memory of it. Thanks to the folks at TOR/Forge, I just received a chance to do that, with this new book from New York Times bestselling author Ralph Peters.

When starting this book, I did not know what to expect or how I would like or react to it. It's "fiction," not the stuff I am accustomed to and not really "history." At least that's how I've usually thought of such works, but I attempted to put that mindset aside as I took on this new volume.

This is an enjoyable book. I liked it. There is no reason to hide the fact that I enjoyed reading this book and often times just wanted to keep reading and reading and reading it. Some parts were more enjoyable than others, but I appreciated how the author changed scenes and "characters" showing Union and Confederate, Generals and privates, success and failure. Some times I wished he would stay with a certain scene longer, a testament to how well-written those scenes were, but the next section would end up being just as fascinating or better.

In the "author's note" section, Mr. Peters opined that a book like this "must demonstrate war's horror and appeal, while depicting the complex humanity of those who shoulder rifles or lead armies."

If that was his target, he he it a bulls-eye.

I think it was his ability to explore the humanity of George Meade, James Longstreet, Thomas Blake and others that appealed to me. Meade and Longstreet come across as the most sympathetic figures throughout Peters' narrative, as he explores his vision of their mindset and thoughts during the period of June 28 through July 3. The doubts, fears, hopes, plans and ideas of not only these leaders but of the other men who appear in the book make this such a compelling story. The descriptions of the horrors of war are vivid and make for great reading, but I really enjoyed how he painted the bouts of self-doubt or self-confidence that these men experienced, the ebbs and flows of emotions. Daily actions that all people take (i.e. bathroom breaks) never appear in ordinary history books, but do show up in this story. It's not a pleasant thought, but if "reality" or "truth" is a desired aspect of a book concerning history, it does not get more real than those scenes.

I do wonder if my feeling that Longstreet was a sympathetic character was because of my knowledge of how the battle turned out. Maybe others will view Lee as the great leader, struggling to get an insubordinate Longstreet to follow his orders and to stop stalling and waiting around. Did my preconceived notions of the outcome of Gettysburg influence how I interpreted this book?

Throughout the story, one character began to question his faith and aspects of his life  before another one suddenly gave him a fresh perspective on this topic. This part of the story was especially fascinating, especially when it reached its zenith. This was the story of "Cain."

A couple brief excerpts that I especially found fascinating and remembered to mark for notation include one on page 257, during the story of July 2, when the author's describes Meade's thoughts amidst the chaos in Union lines: "Grimly, Meade told himself that the Confederate plan was doubtless running like clockwork. Lee's veterans would never succumb to the confusing plaguing the Army of the Potomac."

Of course, in his narrative, Peters had already shown that not to be the case, but such was Lee's reputation that such a mindset among his enemies seems very plausible.

Peters' descriptions of Longstreet trying to convince Lee to change his plans was a constant theme, and I thought the scene on page 329 was powerful, especially the line "No one would ever tell the truth to Lee" which came across as a realistic portrayal of how the old warhorse might truly have thought during his solo attempts to convince Lee to try a new strategy while others, officers and enlisted men, often seemed in awe of the Confederate hero.

The other instance I noted also involved Meade, on page 352: "The ghosts and hobgoblins of error plagued him." The phrase "ghosts of error" really stuck with me, especially given the struggles the Army of the Potomac had been through to this point in the war. It is just a very appropriate and descriptive phrase, showing a very possible insight into the type of internal struggle Meade was facing during this battle. That might be a phrase I keep in mind for my own writing or thoughts in the future.

The author even managed to add new figures to the story in the last sections of the book, such as Confederate General Dick Garnett and Union soldier Daniel Francis Gallagher, among others. After such a long story involving so many others, this came across as a pleasant and well-done surprise, with new personalities and perspectives tacked onto this tale.

This book covered the days leading up to the battle and the three days of fighting, and touched on many of the legends of Gettysburg, some more than others - Henry Heth's search for shoes, Lee's health issues, JEB Stuart's absence, Longstreet's uncertainty (or slowness, depending on your perspective) and the Dan Sickles-George Meade dispute. Pickett's Charge was featured, with James Pettigrew finding his place in the narrative also, but Joshua Chamberlain's fighting on Little Round Top was not and the absence of Stuart was a fairly minor topic.

I liked that it included a couple of maps of the positions of the contending armies and at times I wished it had included more maps and illustrations, like many non-fiction books do.

As I attempt to review this book without giving away too much or going on too long,  I really must admit this work of fiction did make me think much more about the humanity of the men who met at Gettysburg. I have read many of their writings and reports, their memoirs and biographies and have seen or heard countless hours of analysis of their decisions and though I know this book is based on one authors visions and perspectives of the various personalities in the book, perhaps I need to give more consideration to the human side - the fears, foibles, weaknesses, convictions - of these men, no matter how great or small their reputations are. I did start to develop emotional attachments to many of these men while reading this book, which is a compliment to the author's writing. I do not claim that this book contributed a lot to my quest to understand the memory of the war, but maybe I can think in a new way about the decisions and actions of men so long ago and to see them in a different light, as actual men and women, not just soldiers and historical figures.

For anyone interested in Civil War fiction, this book is an excellent place to start. Granted my experience with this genre is not long, but I have read many enjoyable books and this is certainly one of them.

Disclaimer: I did receive a review copy of this book for no cost. Despite this, the comments in the review are my honest and true thoughts and nobody at the publisher attempted to influence this review.