I'm not really sure how to approach this idea that popped into my head today, but it seems like a good idea or question to mention here and maybe help me think about it or about how to approach it. This will probably be kind of a stream-of-consciousness post as I figure out what to say or how to explore it.

I live in northern Kentucky and work in Cincinnati, so I cross the Ohio River every day, along with thousands (or tens of thousands) of others, some going north like me, but many heading south. It's not a big deal; I've even walked home from work many times, a distance of about 2.5 miles.

150+ years ago, however, even that short distance was much longer than it seemed, at least for many African-Americans. The Ohio River was an unofficial border between the slave state of Kentucky and the free state of Ohio (as well as Indiana and Illinois - check out a map - Kentucky has a long northern border along the Ohio.)

If a slave tried to run away, oftentimes reaching the Ohio River, with stations on the Underground Railroad along its banks, north and south, was a major goal and milestone. It did not guarantee safety - Cincinnati was not the most progressive city regarding racial relations (some people even today say Cincinnati is like part of Kentucky, while others claim Northern Kentucky is more like Cincinnati than the rest of the state) and if escaping slaves could cross the river, so could slave catchers.

Nonetheless, it was an important boundary between North and South, free and slave, and it made cities like Cincinnati and Louisville into important trading ports. The border along the Ohio River was a key reason Abraham Lincoln considered keeping Kentucky in the Union to be so important. If the Confederates could set up defenses along the lower banks of the river, they could devastate Union trade in the west, prevent Union forces from penetrating the Deep South in the West (think Vicksburg, Shiloh, Corinth, Nashville among the key southern cities in this theater) and perhaps have a launching pad for attacking the Illinois, Indiana, Ohio or other Northern states with more than an occasional John Hunt Morgan raid.

Despite this, I cross this river twice a day and until today never really thought about it in a historical context. Does it make sense for me to try to picture escaping slaves (like Margaret Garner for one famous, though unsuccessful, example) while I'm in an air-conditioned (in the summer, heated in the winter) bus? Should it help me appreciate my good fortune or to understand better the differences between now and the past? How many African Americans would have absolutely loved to have safe, reliable transportation from my beloved Kentucky into Ohio or another northern state?

To me, the Ohio River is just a piece of everyday life, nothing really special or noteworthy, except for an occasional flood. Historically, however, this was a key border, a major crossing point, a place of hope for people to try to reach freedom, to escape bondage, to try to have some control over their lives. It is not a famous battlefield of dozens or hundreds of acres, with monuments and gift shops and tourists taking pictures. It is simply a wonder of Nature that human mapmakers once used as a separation point of what we call states, and which continues to flow southwards, just as it did 150 years ago. It has no mind or desires or other human emotions, but steadfastly flows until it reaches the mighty Mississippi. Yet this river, one of many throughout the country, even as constituted in 1865 and before, was very important, as a border into potential freedom and as a goal, to countless people who wanted to better their lives.

I often wonder what it would be like to live near a really famous battlefield like Gettysburg or Antietam or Shiloh. My appreciation for Perryville grows as I understand it more, but even that is a couple of hours away.

Yet here is an important place, just a few minutes from my home, that absolutely played a role in 19th century America and in the slavery controversy that at least contributed (though I believe caused) the bloody Civil War.

This is a perspective I had not considered before. I'm sure I'll think about it more often now, as I routinely cross this border so frequently and easily. 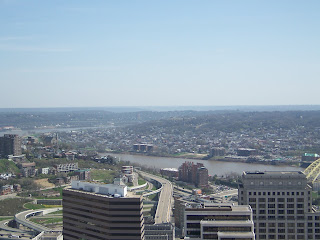 The above is a picture I took in April 2009 from downtown Cincinnati, with a brief view of the river separating the states.