Well, my summer lull in posting continues, but now that Battery Hooper Days at the  James A Ramage Civil War Museum and all the effort it entails is complete, perhaps I can now spend more time thinking of more topics and doing some more research for interesting subjects and stories.

This year's event was a huge success, with about 1,200 visitors over the 2 days and brisk sales and donations, which will be a big help to the museum. The weather was as good as it can ever be in August in this area - mid 80s for the temperatures, just a few white clouds dotting the blue sky, no rain. Sunday was a bit more humid, but not bad. We have often had temperatures in the 90s with a lot of mugginess, and the way July went this year, with record heat, that is kind of what we expected. Instead, we got the most beautiful August days we could ever dream of.

As usual, the re-enactors, living historians and speakers made the event fun and entertaining. We had 2 new musical groups this year, Chamber Music with Flutes on Saturday and Raison D'etre on Sunday. Both were phenomenal.

We also had a Jefferson Davis impression for the first time and his interaction with Abraham Lincoln was fascinating. They had worked together before and their chemistry was great.

The re-enactors set up a very neat encampment, with several great displays. The cannon fire and musket fire both grabbed people's attention and had visitors smiling and enjoying themselves. These guys also did a great job in the ceremonies we had to remember Bob, showing their appreciation for a departed colleague and fellow re-enactor. I really appreciate the work these guys do in setting up their camp and interacting with the visitors.

Harriet Tubman and Harriet Beecher Stowe impersonators told their fascinating stories again, and generals Lew Wallace and Horatio Wright were kind enough to adjust their speaking times to help fit in the memorial ceremonies for their pal Bob Clements, before delivering their enjoyable talks.

Stuart Sanders from the Kentucky Historical Society was kind enough to drive from Danville to discuss how the battle of Perryville affected the local region. This is also the subject of his fine book, Perryville Under Fire

The Ladies' Living History Society of Greater Cincinnati continued to impress visitors with their dresses and the spinning wheel demonstration. They are always a popular group.

We did feature  Honey Hill Petting Zoo again this year, and people -kids and adults alike - flocked to it to see the various animals they brought. I admit it's not the most "Civil War" aspect possible, but people like it and they come to see it, and that certainly benefits the museum.

Of course, Dr. Ramage delivered a great talk on Saturday and a descendant of one of the members of the Black Brigade of Cincinnati attended and gave a brief talk after Dr. Ramage's remarks. I wish I had gotten more time to meet and talk to him, but someone had to run our used book sale at that time. :)

Last of all, the ceremonies for Bob were very moving. We named the backyard of the museum, where we always have the encampment set up for this event, "Camp Clements" and had a wood signed created by the husband of one of the museum board members. For now, we nailed it to a tree, but will have a more permanent cedar stand set up to display it on a permanent basis.

I've added a couple of my photos below, but you can check out my personal facebook page to see more. If I get them uploaded to photobucket, I will add the link here 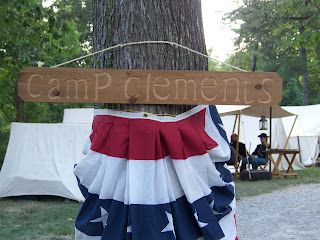 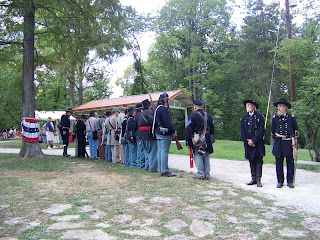 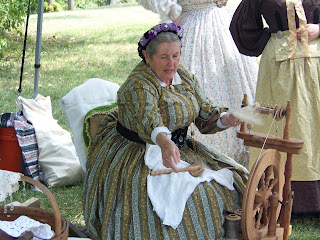 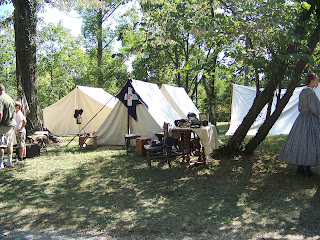