I frequently mention that I volunteer at the James A. Ramage Civil War Museum in Fort Wright, Kentucky, just a few minutes south of Cincinnati.  I started there in September 2006 when I responded to an article about a public archaeology dig at the museum, on the grounds of an actual Civil War defensive position known as Battery Hooper. After that dig, I became a volunteer and soon thereafter attended a local festival called Tall Stacks (a really neat experience - hopefully it will be back soon.)

I saw the museum represented there, and a man in a Civil War re-enactor's uniform was giving a presentation. He was very enthusiastic, obviously out-going, and a very effective speaker.

After the talk ended, I went up and introduced myself to Bob Clements, then President of the Board of the Directors of the Ramage Museum and told him I was a new volunteer at the museum. He welcomed me very warmly and since then I have been fortunate enough to call him a friend and even colleague as I became more involved at the museum.

This morning, I woke up and, after getting ready for work, sat down at my computer to check a few things out before heading out the door. One of the sites I checked was Facebook and there I learned that Bob had passed away last night due to a heart attack. He was only 52.

This devastated me and though I managed to get through a whole day at work, this news rarely was far from the front of my mind. It is so sad and hurts so much. I can't imagine what his wife and 2 children are feeling right now, but my pain is bad enough. I certainly will keep them in my thoughts and prayers.

Bob is, was, a great guy and I really loved meeting another person who shared my passion for the Civil War. He really was the first one like that I met and we became good friends, talking about the war, reenacting, museum business or collecting. He was a big collector of Civil War items - nothing huge, but a lot of relics, some swords and bayonets and quite a few items about the Grand Army of the Republic, especially the 1898 and 1930 encampments in Cincinnati. I loved looking at the stuff he loaned to the museum or occasional other items he would show us.

I even got the collecting fever from him. I have quite a few books, including some antique ones, Abraham Lincoln busts and images and other small items. I'm hardly a wealthy collector of big fancy items, but I have quite a few smaller things that I enjoy having. Perhaps I should blame Bob for leading me to spend so much money on stuff like that, but, seriously, I have learned to appreciate these items thanks to my relationship with him.

I know this is a rambling post, with no real relevance to the war itself, but I feel the need to express my feelings and Bob certainly encouraged and helped me discover how far my obsession goes. He encouraged me by complimenting my blog and some of the items I bought and loaned to the museum. He was always very friendly and open, and has more friends than I can imagine. He seemed to know everybody, and I am lucky and happy enough to say that included me.

Battery Hooper Days, the 8th version, is coming up at the museum this weekend. Perhaps I will still find time to write about it and publish the schedule, but that seems less important right now. Bob loved BHD (as we call it) and for him to pass away just before this weekend seems especially cruel, though I guess there is no good time for something like this. Why could he not last just one more week and enjoy just one more BHD weekend?

I'm sure I'll be thinking about Bob a lot in the future, especially the next few days. He was one of the greatest men I knew, far from perfect, but a great friend, open, honest and optimistic. I will miss him greatly but will try to remember how much richer my life has been by knowing him.

Bob - I will miss you, your friendship, your enthusiasm, your love and knowledge of the Civil War.  I hope you can meet Francis Washburn where you're at now and see if you look as much like him as his tintype indicated. I'm sure he has many stories to share with you and will be proud of how you took care of his artifacts that found their way to your hands. People like you who help preserve such items do a favor for all the future history enthusiasts to follow. Thank you for providing an example for me that you do not have to have guns or cannons or uniforms in order to have a collection worth having and sharing. Thank you for adding to my obsession with this war.

I will miss you 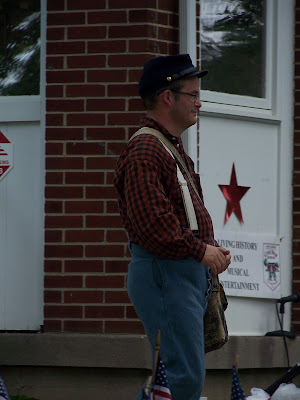