Squirrel Hunters in the Siege of Cincinnati

I've made several recent posts about the Black Brigade, a group of African-American men from Cincinnati. They helped create the defensive positions on the hills of Northern Kentucky, just south of Cincinnati and these positions helped defend the region from a potential Confederate attack in early September 1862.

Well, another group of men who were among those who joined in the area's defense during the Siege of Cincinnati became known as the the "Squirrel Hunters." One local legend states that their name came from their ability to shoot squirrels out of trees on the Kentucky banks of the Ohio River while they were still in Ohio. I tend to doubt this, because that area did not feature a lot of trees, even then, as both sides of the river were used for boat landings. Plus, any trees that may have been there likely would have been torn down just to give a better line of site. My guess is that the name came due to these men bringing their hunting rifles and wearing their hunting clothes. These were not professional soldiers, or even trained volunteer soldiers. They were, actually, much like the famed "Minutemen" of Revolutionary Times, though perhaps not even as experienced as them. They heard their country call for help (probably from proclamations issued by General Lew Wallace when he took command of forces in the area or from Governor David Tod), grabbed their gears and traveled to Cincinnati, by train, horse or foot.

Here is a very nice article by David E. Roth on the Cincinnati Civil War Roundtable's website that provides more details on these men and their unique nom-de-guerre.

Once in the area, they crossed into Kentucky, where they assisted in building and manning many of the fortifications in the local hills. Approximately 22,000 actual army troops, under command of General Gordon Granger had rushed from Mississippi, but a large group of volunteers, perhaps 40-50,000, from Ohio and Indiana joined them. Thousands of these volunteers were the "Squirrel Hunters."

After a couple of weeks, the siege let up and the Confederates headed back south. There was no further need for the Squirrel Hunters and they even may have become a bit of a nuisance, at least to a regular Army man like General A.J. Smith who wrote "Cannot I get rid of the Squirrel Hunters? They are under no control" in a letter to Lew Wallace on September 17, 1862.  (The War of the Rebellion: A Compilation of the Official Records of the Union and Confederate Armies Series 1, Volume 16, Part 2, page 524)

The Federal government did not recognize these men as a separate unit, or even as enrolled volunteers as their service ended, much like the Black Brigade. Ohio Governor David Tod did appreciate their efforts, however, helping to find money to pay for their train rides home and even had discharge certificates printed up for these men. 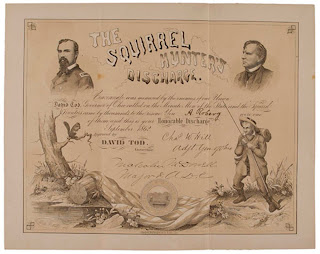 The state of Ohio eventually did offer pensions for some of these men, as Jim Schmidt explains in this blog entry

The legacy of these men is one that probably deserves some more study and research. When I mention them in a museum tour or when discussing the Civil War in the area, their nickname often brings about a smile on people's faces, almost like it's a cute story of some sort. The legend of their shooting ability does the same. People seem to appreciate their patriotism but as something less than true soldiers. Perhaps, however, that is a correct impression.

In the end, however, these were men trying to partake in serious business, defending their homes and families (that was not just a Southern desire.) Certainly they did not provide the usual military discipline of Army soldiers or even of many volunteers, but their state and region were in jeopardy of invasion and they turned out in large numbers to help as they could, though the first article linked above shows they mainly wanted to fight and not do as much of the dirty work. The threat ended up being much less than expected - some early reports claimed tens of thousands of Confederates were invading (see an example here), but Henry Heth's men only numbered 8,000 or less - but it was a threat and they responded to it quickly and bravely and earned pride in their name and, eventually, even a pension from their state.