More on My Perryville Experience

Well, I had planned to post frequently about my trip to Perryville, but the lousy performance of the Cincinnati Reds during their 3 game slide to end the playoffs and a busier-than-expected weekend kept me away from here.  In a sense, I regret that, as some of the freshness of my trip to that beautiful battlefield has worn off, but, on the other hand, I've had some time to consider what I want to discuss.

Part of my thoughts in my previous message included my wondering about the purpose of reenactments and why people such as myself enjoy them or think they are worth attending. After I posted it, I was fortunate enough to come across a link on Dr. Brooks Simpson's Crossroads blog, addressing similar questions.

The linked article certainly raises legitimate questions and concerns. Re-enactments or similar living-history portrayals of the period (or any period) are imperfect. Not only do the questions he raises, about war causes, the true horror of the death and destruction caused by war, and about slavery and relations are issues not addressed in such settings.

I also agree with the claim that the ability of these events to attract large crowds can be a good thing. Perhaps they do not take full advantage of the possibilities of educating more people, but seeing a few hundred or thousand people on land that once was a battlefield (that's another question - is park land still a "battlefield" just because it once was the sight of a battle?) is far better than seeing another mini-mall, apartment complex or gas station.

Personally, though, attending this event provided a new, unexpected perspective. Seeing so many men in uniform gave me a better realization of the true scale of the actual battle.  Looking at the below pictures, there may be a few hundred re-enactors lining up as Union soldiers, far fewer than 150 years ago, but these scenes really struck me as quite impressive, seeing so many "soldiers" at one time, lined up to go to their (pretend) fight. 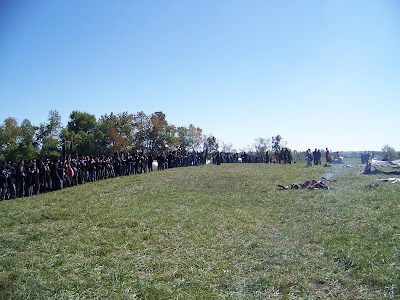 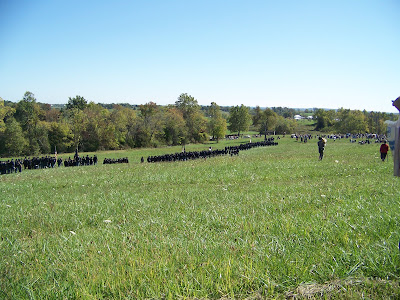 However, during the actual battle, perhaps 5 or 10 (or more) times as many men were present on one of these fields at a single time. Walking the park and thinking about thousands of men there is one thing, but to see so many men lined up and how long the line stretches makes it seem all the more awesome to think of how many men fought in battles like at Perryville. Even if I'm seeing 10% of the actual size of the armies, such a perspective about how much room such a line took up was much more effective than to stand at the same place and imagine thousands of troops there. I'm not sure if I'm finding the right words to express what I mean, but the sight of even a few hundred men lined up shoulder-to-shoulder impressed me greatly and drove home the point of how large such a fight was and how long an army's "line" could be. This is not something I have felt on a battlefield visit or even from the best of books or videos - it was something I needed to see, or, to resort to a cliche, "you had to be there."

I think that is a valuable part of such a portrayal. Even the camps, with dozens or tents lined up, campfires around them, soldiers hanging around, added to this feel, as did the living history section of this particular event. My senses of sight, hearing and even smell all experienced different sensations at this event, giving it a sense of reality I could not recall. I knew it was not a real batter and those men lined up marching behind the drum and fife corps were not marching to their death, and that crowds of spectators would not gather around a fight (though it did have a touch of the feel of some of the descriptions about picnickers at 1st Bull Run mention), but it was a different way to see the war and what happened. I can read hundreds of descriptions of men marching, but this was different. When I heard the drums beat and saw the men march behind them, I actually got goosebumps.

Maybe it's because I have not attended a lot of these that I was so impressed, but, even if so, that is a good thing. I have heard the beats of the drums, the cracking musketry and the roar of the cannons, seen the sky filled with smoke and smelled the gunpowder in the air now. Now to think of it being 10 times as big or loud or smelly - wow. Maybe I can say that at Perryville "I saw the elephant" in some sort of way.

I was not the only one to add to my education at this event. I overheard several kids asking their parents questions about what was happening ("Are those real guns?" "Why don't they use bullets"). I even had a couple of conversations with other guests at the event about the battle here or the Civil War in general. When I was volunteering on Saturday morning, a man came in and asked "Why was this battle important? Why here?" and one of the  local volunteers, who is a dedicated volunteer at the park proceeded to provide his thoughts on the matter and a couple of others, including myself, joined in the talk. That is not going to educate the masses, but was one small example of the opportunities this event provided. How many such conversations would have taken place without the re-enactment taking place?

I also may add that I stood near the "cornfield" of Perryville and watched the Confederate re-enactors pushing the Union troops back, their impression of the "Rebel Yell" was pretty neat too. Maybe it was just a bunch of guys having fun, but the yelling was loud and attention-grabbing as they moved forward. It certainly added to my enjoyment of the event and was another aural signal that simply cannot be replicated in books.

The below videos may not have the greatest pictures, but they are good enough and the sound really makes them so wonderful