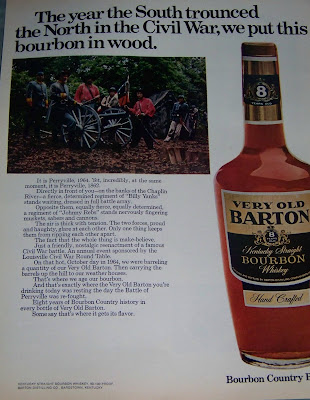 I realize the picture is not the greatest, but this is a bourbon advertisement from 1972. The paragraph on the sides discusses a Perryville re-enactment from October 1964 showing men pretending to be in the battle of October 1862.

The point of the writing is for Barton Distilling Country to promote their current batch of bourbon (from 1972 when the advertisement ran, in Life magazine) having been aged since that re-enactment. They apparently were proud of their 8-year aging process and used this advertising to promote their product.

Of course, the more interesting part of the ad was the language at the very top of the page. First of all, the first reading of it makes it seem as if they had been aging their bourbon for over a century. Then comes their choice to claim "the South trounced the North in the Civil War."

Where they got that from  is a mystery. When I started reading the smaller print about the re-enactment I thought they might use a Confederate "victory" in the staged battle to tie to the large print above but they did not do so.

Apparently, this advertisement was meant to appeal to a certain audience, i.e. those who favored the Southern cause. Barton, or its advertising consultants must have thought that this wording would catch attention and (hopefully) the dollars of southern supporters. Almost forty years later, it certainly caught my attention.

I suppose this was just a case of using wording to appeal to a certain group of people, but I am still a bit surprised to see something as blatant as "The year the South trounced the North in the Civil War" given that this phrase was so far from any sort of historical accuracy and that this ad ran in a national magazine.