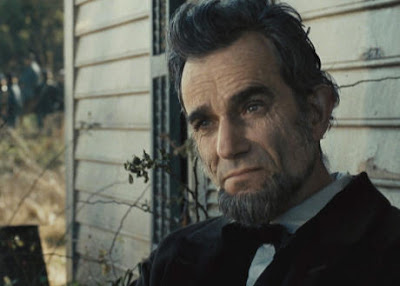 I finally found time to see Steven Spielberg's film Lincoln today and though I am not trying to do a full review of it (there are plenty already available since it has been out 2 months) I wanted to write a few words while it is still fresh in my mind.

First of all, this is probably now my favorite movie of all time. Silence of the Lambs was probably my previous favorite, but this really does not mean much since I see so few movies. (My last trip to the theater was for Star Trek: Nemesis a long time ago.) Still, my impression of this movie was that it is simply sensational.

A couple of scenes actually hit me kind of hard emotionally. One was early in the movie when the president got on the floor to wake up Tad and then picked him up on  his back to go to bed. The other was when Lincoln was reading to his son while waiting for the results of the vote on the 13th Amendment. I don't know the reasons, but both of those really struck me as being great scenes and images.

Another one was when he was leaving to go to Ford's Theater with Mary. Of course, I know the historical record and what happened next, but to be emotionally involved in the movie and then get to that point - well, it really got to me, just imagining the pain of the next few hours for so many people.

I am not going to pick nits over any issues of the film. I thought a couple of scenes toward the end were a bit contrived or maybe could have been done better. Would it have been better to show the events at Ford's Theater? Or, maybe they could have ended the flick with Lincoln walking down the White House hallway, heading towards his ride to the theater, leaving the rest up to the viewer's imagination. Then again, who am I to criticize Spielberg, especially for a film I loved so much.

I also must admit that being away from the theater for so long made me forget how spectacular the big screen can be. That is so different from my normal TV, Ipad or computer screens, but I had not thought about that before today. That added to how impressed I was with this show.

I really liked how it addressed some of the subtle items of Lincoln's life and challenges he faced, stuff that non-history buffs might not know, such as the relationship with his son Robert, with Mary, with cabinet members, the politicking to get votes and the different views of Republicans, conservative and radical.

Overall, it was just an enjoyable movie, with a lot of historical information in it, presented in a way that people who might not watch a documentary may enjoy and learn from. I just had a wonderful time watching it and kind of wish somebody would do a similar film and call it "Mary Todd" about her years in the White House and then afterwards with all the challenges she faced. I guess there would not be enough demand for something like that, but I think a similar effort could produce a spectacular (and probably gut-wrenching) story. Maybe it would be too sad to show in such a format, but I would certainly watch it.