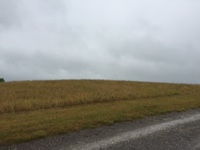 The ground was wet and sloppy, saturated with recent rainfall, the temperatures were on the cool side, and the sky was gloomy and overcast, seeming to promise more precipitation. Though the soldiers who fought at Perryville would have gladly welcomed such conditions, I was more than a little bit anxious about how such conditions would affect the walking tour I was about to take.

It certainly did not appear to be the greatest of all days, but luck ended up on our side. Additional rainfall stayed away and though the sun remained in hiding and temperatures did not rise much, it ended up being a perfectly fine day for the tour, perhaps even better than a hot, humid day would have been.

The tour was in two parts and I only went on the first one. My legs were feeling tired and I did not want to push my body too far. I kind of wish I had tried to go out for the second part, but it was over a part of the field I have seen very often and I had already seen new spots and learned quite a bit in the morning session, so I sat out the afternoon walk and headed home.

Anyway, it was an enjoyable day, even slopping through wet ground and frequent mud puddles. The park is still in wonderful shape and even such gloomy conditions could not hide its beauty.

Amazingly, we started at a stop which I had apparently not visited before, called Jones' Ridge. It gave a view of the "Valley of Death" that I had not seen before. From here, I could see the actual valley, not just a stretch of land. I had read about it before and walked through the area, but perhaps like the cliché "cannot see the forest for the trees," I previously could not "see the valley for the flatness." It was a great breakthrough for my understanding of that part of the field, seeing where Daniel Donelson's Confederate forces marched and how three different Federal batteries were able to fire on them. It was a bad place for troops to be.

I also was able to see how Thomas Jones' Confederates were in position in a neighboring valley to hear Donaldson's attack, but not see it. I do not know how I had never been to that stop on the park's tour (though the trail to it is unmarked at its start, so I had probably marched right past it several times, not knowing what I was missing.)

Nevertheless, it was a fun and pleasing way to start the day, certainly a memorable "a-ha" moment for me.

I could also now see how Jones' men advanced up the hill in front of them three times against Loomis' Heights and Peter Simonson's battery. They failed to take the position, but their determination caused the Federals to use most of their ammunition, so when John C. Brown's Confederates replaced Jones' men in trying to take the position, the weakened and wearied defenders finally gave away. Where this took place was much more visible from this spot than any I had visited before. It was a much better angle. 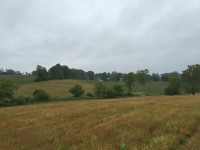 View of the Valley of Death 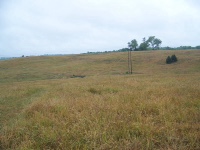 The rest of the tour was terrific as well. From Loomis heights, I gained a better understanding of the Federal defense against Confederate attacks from various sides and angles by Patrick Cleburne, Bushrood Johnson and Daniel Adams, as well as Jones and Brown, on Loomis Heights and from around Doctor's Creek and the Bottom House. I could then see where the Federals retreated to regather, around the Mackville Road, with some going to what became known as the "Slaughter Pen." My view of how this end of the Federal line reacted to the Confederate onslaught improved significantly here, and I now see more clearly how Leonidus Polk ended up in enemy line before making a narrow escape as nightfall came. 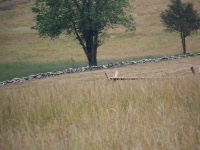 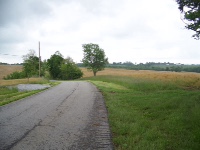 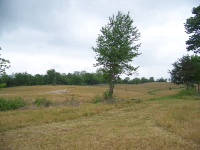 The second part of the tour was going to focus on the other side of the field where George Maney's men attacked Federal positions such as the Open Knob and and Starkweather's Hill. I've been on that ground several times and think I have a decent idea about what happened there, but what have I been missing, like Jones' Ridge? I know I did not get to see the land that the Civil War Trust is acquiring and I regret that. I wanted to see it, but forgot about it or I may have gone ahead with this part of the hike. I suppose fatigue affected my memory, or at least that is my excuse. I guess that just gives me good reason to make another trip sometime soon. Perhaps I can do another weekend where I visit Perryville and other fairly close historic sites like Abraham Lincoln's birthplace. I spent a couple days doing that a few years ago and enjoyed it, so maybe it's time to try that again.

Here is a photobucket link to all the pictures I took. As usual, I took too many of the cannon, but no big deal. I go still need to take better notes for my photographs do I can explain them better, but maybe next time.

If anymore thoughts of this trip spring to mind, I'll share them here, and, as always, if anyone who reads this has the opportunity to go so, I strongly encourage you to visit Perryville battlefield, especially when a guided tout like this is scheduled. It is simply wonderful, a true Kentucky treasure.