I spent this most recent Friday and Saturday, June 1 and 2, down in Cynthiana, helping prepare and set-up for the re-enactment at Ashford Acres Estate. I  did not make it back for Sunday, but still enjoyed the event and seeing some of the work that goes on behind the scenes of something like this.

I helped with a few of the necessary steps for the event. I assisted in putting up a tent fly for the Cynthiana Battlefields Foundation went on a run to get another water hose to help provide water for the horses and helped put stakes in the ground to mark the spectator’s line. Glamorous and glorious, it was not.

I also registered some of the re-enactors as they arrived, making sure they signed waivers and had the necessary information for the weekend. The next morning, I sat in the parking lot where I accepted admission fees from guests and handed out event schedules and parking passes. This was not hard work, though sitting in the sun for a few hours on a beautiful, sunny morning left my neck feeling quite warm and perhaps a bit burned, though not too badly. I did a few other tasks, some smaller than others, to help, but also noticed several other volunteers helping out with similar duties. I know there was a lot of work done before this weekend to find re-enactors, secure a location and a parking shuttle for the weekend, and take care of many other details to help the weekend run smoothly, but quite a bit of work remained for the weekend and it was a great group of volunteers who accomplished it.

I hope anyone who attends a re-enactment, Civil War Weekend or other similar event will appreciate the work required to put on such a display. Please realize that many, perhaps most, of these are the work of volunteers doing this for their own personal motivation, but certainly not for money or attention. Personally, I love the Civil War and being part of bringing something like this together satisfies me and helps me feel I am somehow contributing to the continued study and interest in this fascinating period of history. Volunteering, along with maintaining this blog, are my ways of attempting to contribute positively to something I love. I suspect other volunteers have similar feelings, as well as a sense of civic duty or pride. Like the discussion of why soldiers chose to fight in the war, there are as probably as many reasons for volunteering as there are volunteers.

I missed the cavalry and infantry demonstrations Saturday morning, but did get to see most of the battle. It was fun to watch, and like Perryville 2012, the wind blew in the right direction to let me get a strong whiff of black powder. That certainly added a sense of reality to it. I was also impressed with how the horses did not let the musket fire bother them. Obviously the re-enactors had done a good job of training their animals and their horsemanship appeared very strong to my amateur eyes, but I still like giving the horses some credit.

Overall, the weekend went well. A brief drizzle showed up on Friday, but Saturday was virtually perfect in terms of weather, and Sunday seemed to be similar. Somewhere between 100 and 200 re-enactors showed up, and the crowd was a few hundred strong on Saturday. Perhaps there could have been more advertising and promotion, but my impression was that it was a success.

I was not as close to the “action” as I hoped,  and I had forgotten my camera, so I relied on my phone for some pictures. My photos of the battle were not my best ever, but I did get some nice ones of the encampment and will share some of them here. 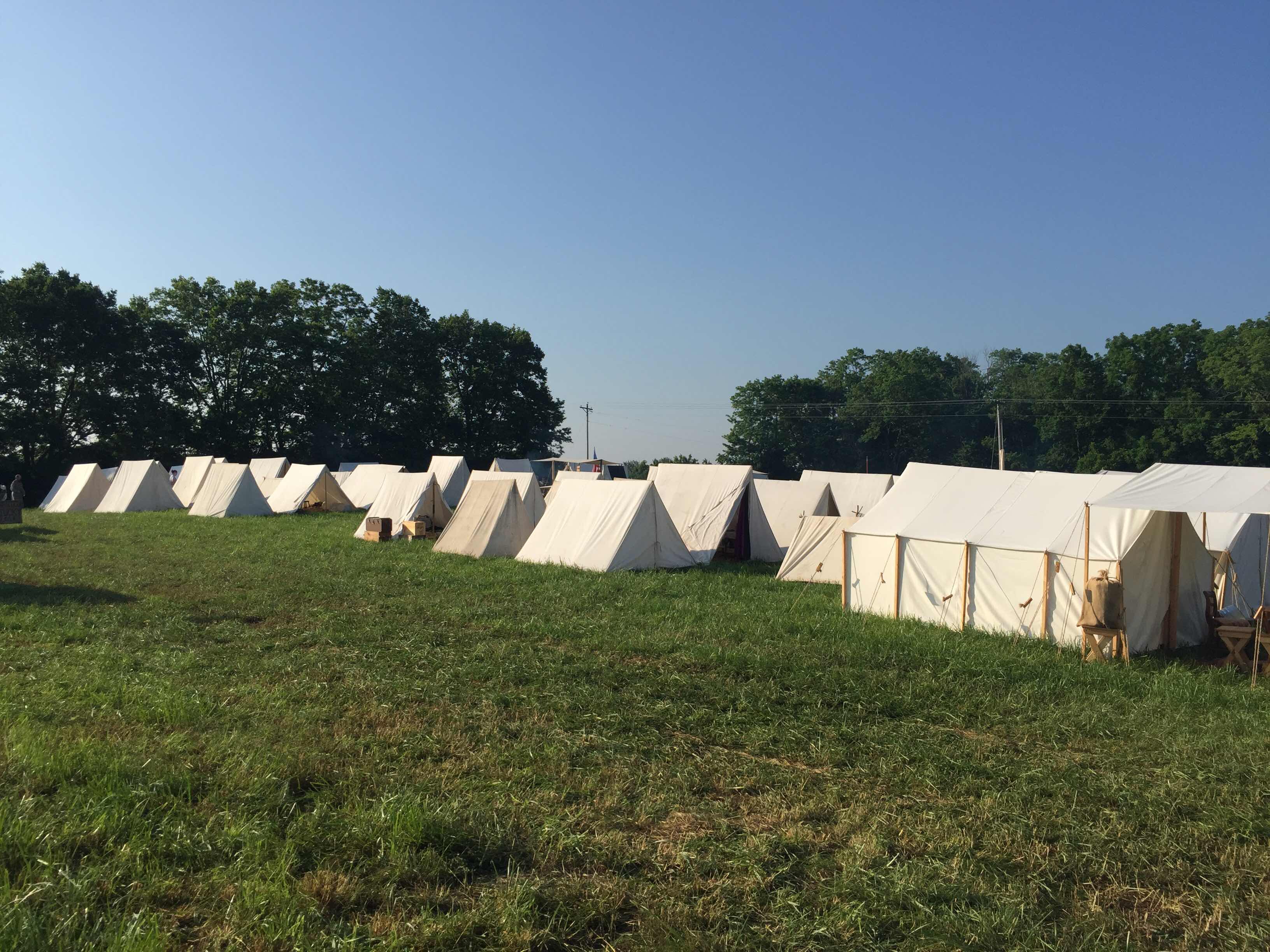 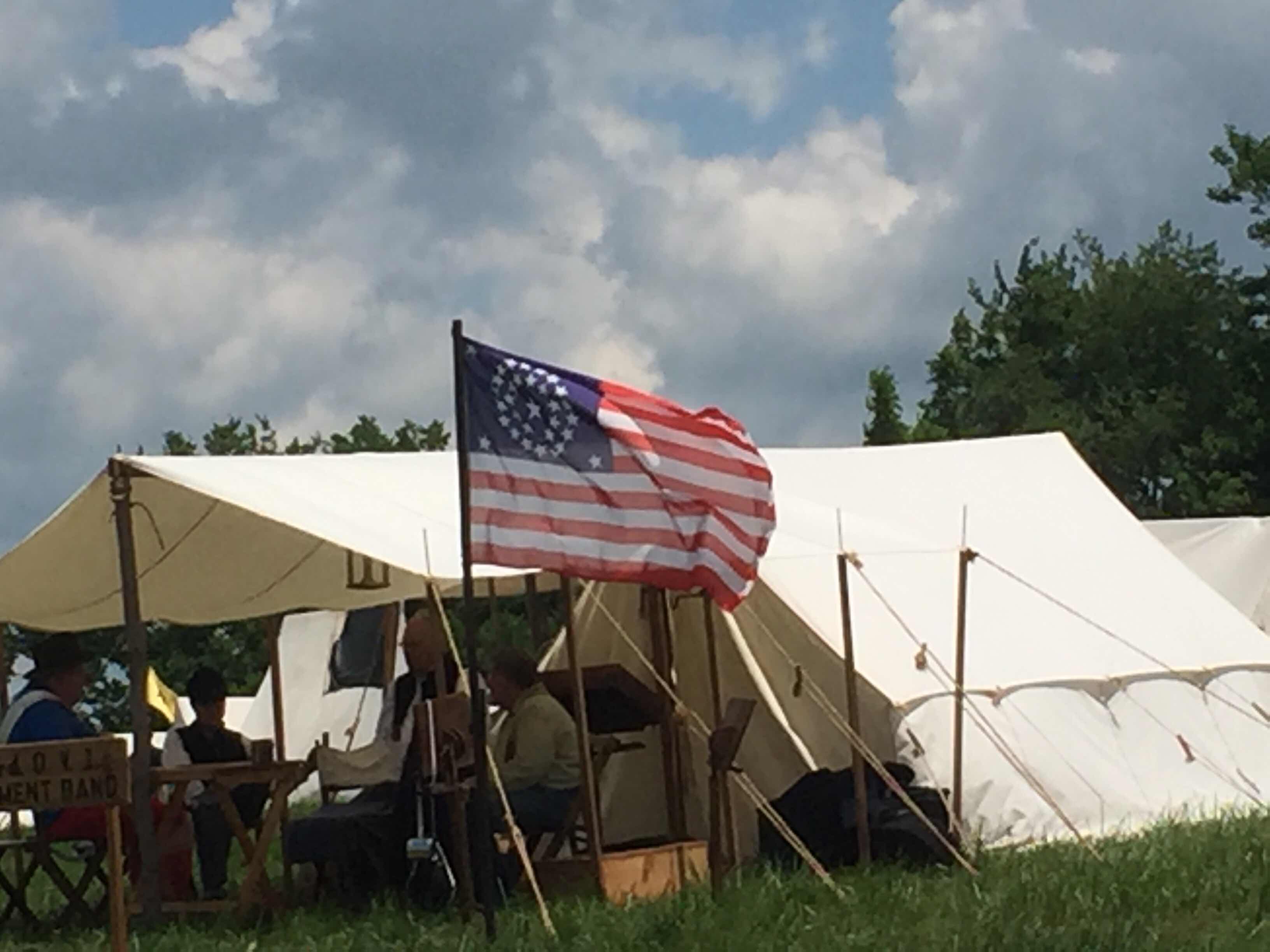 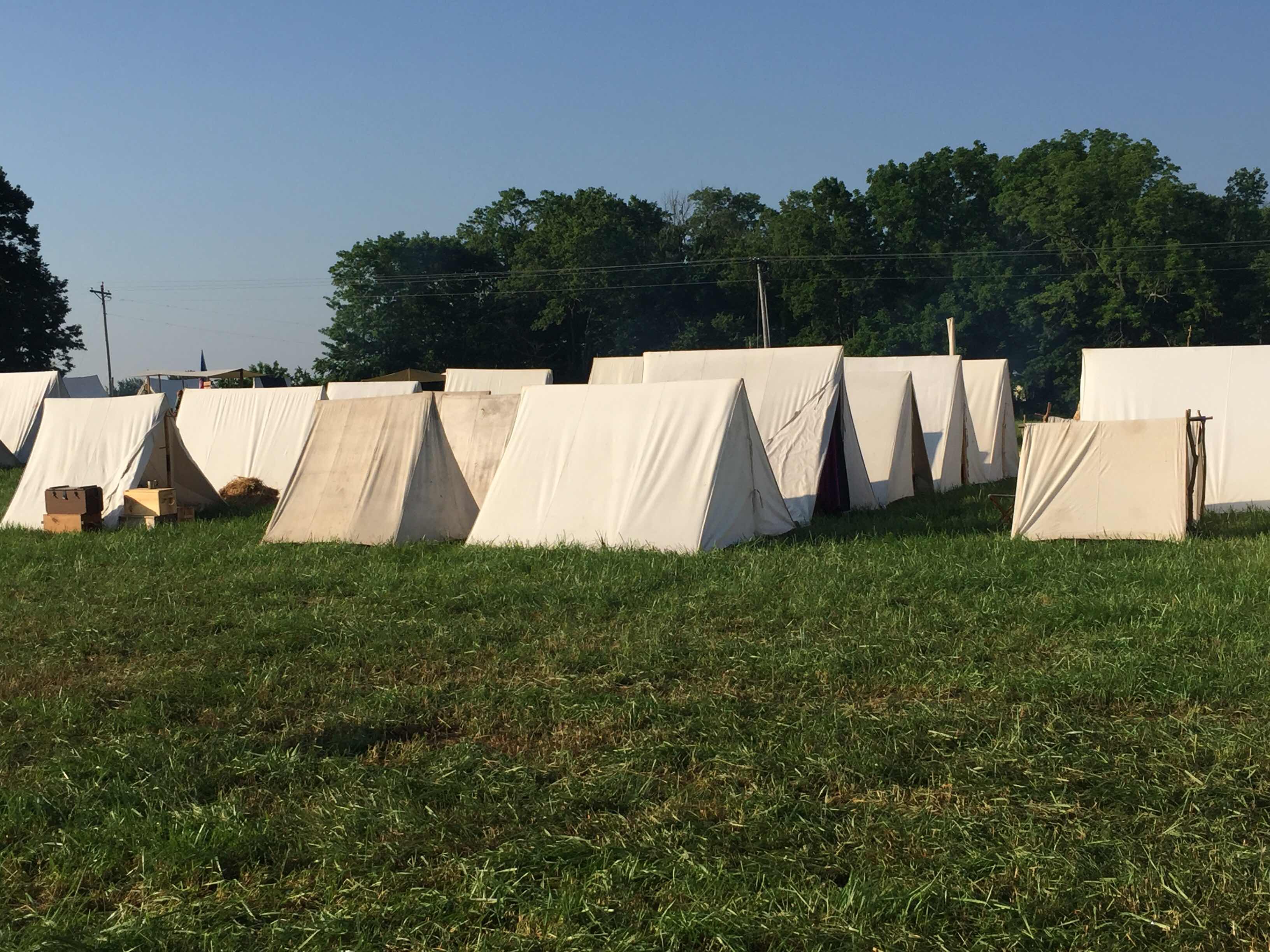 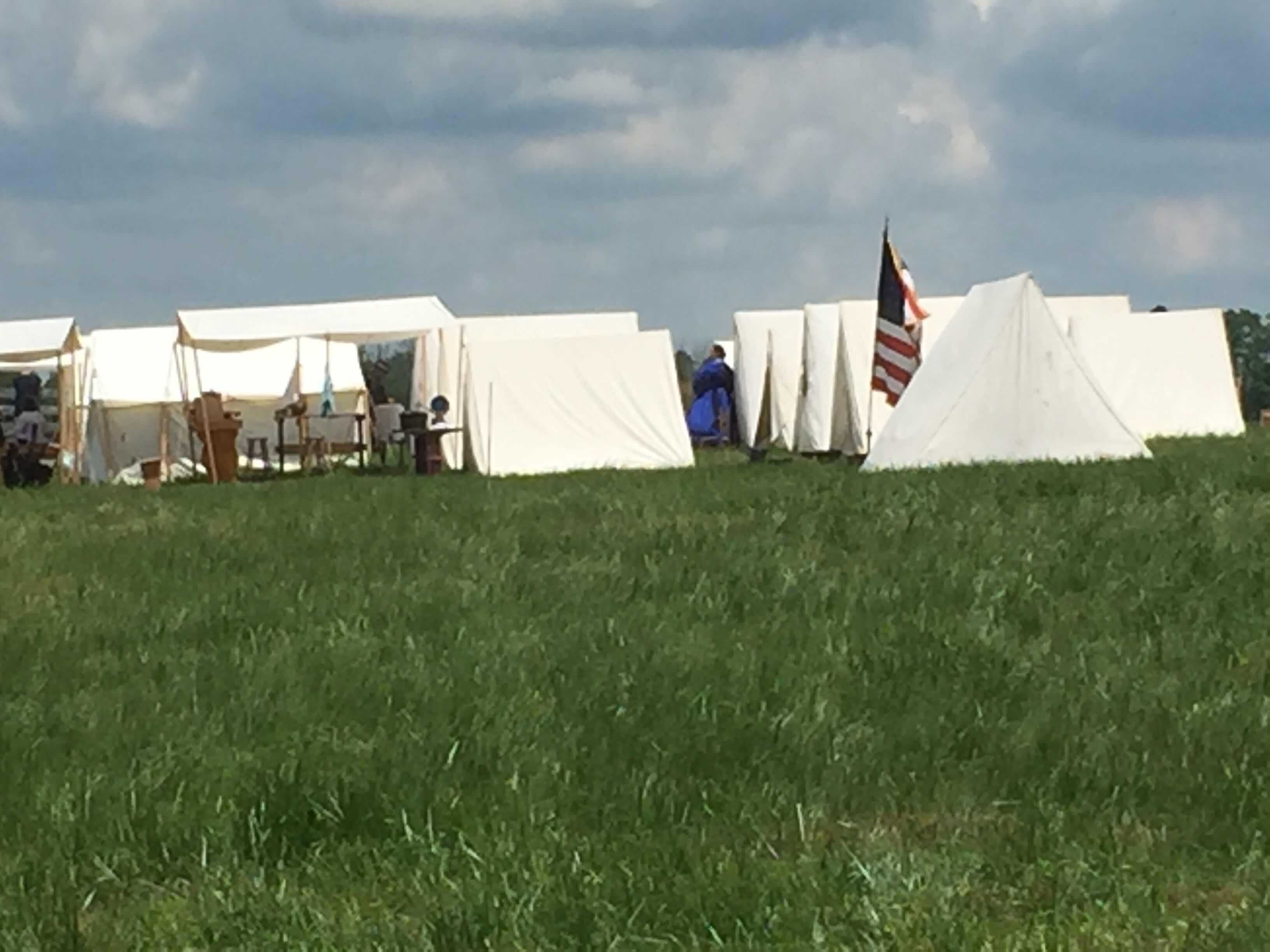 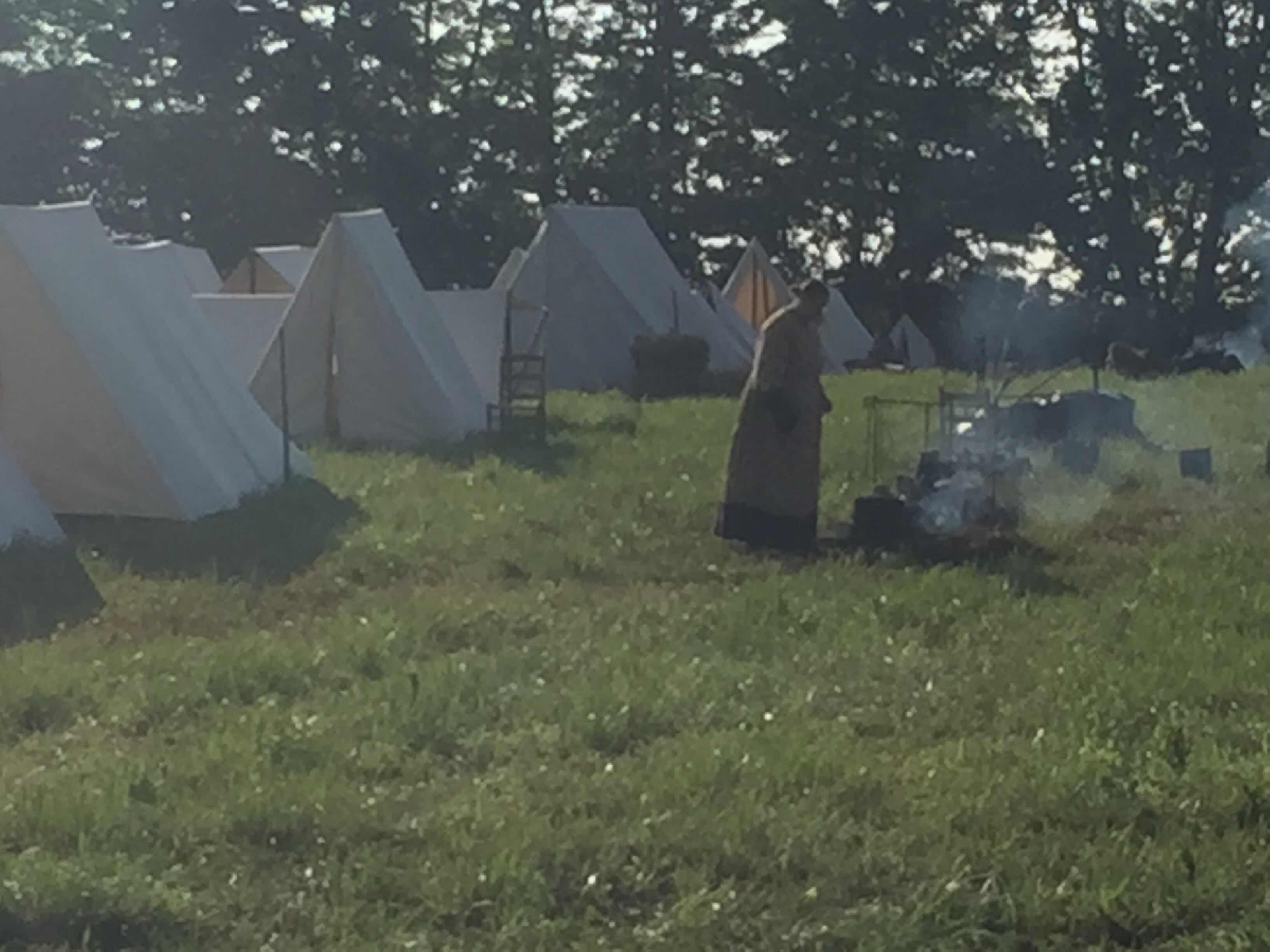 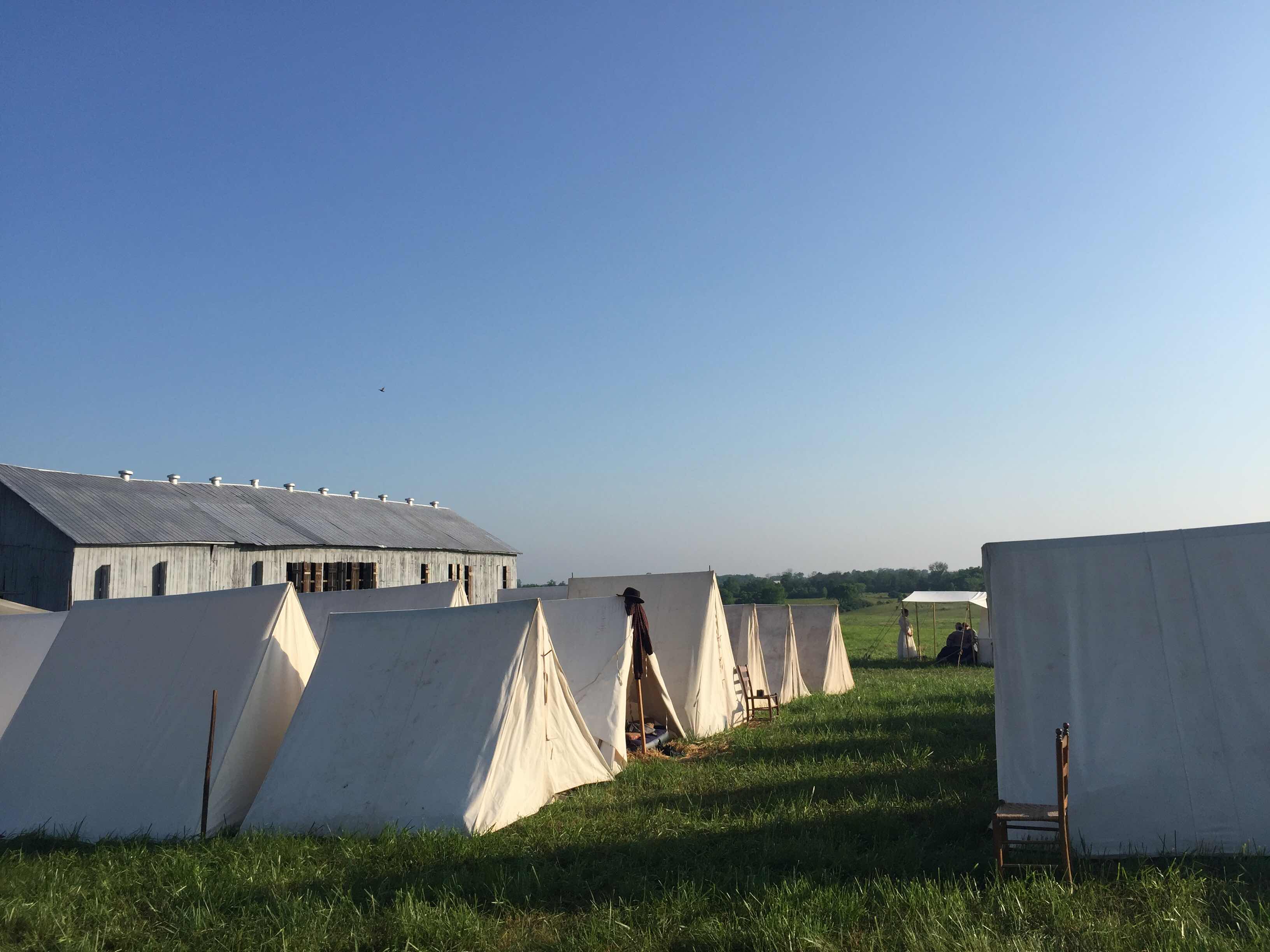 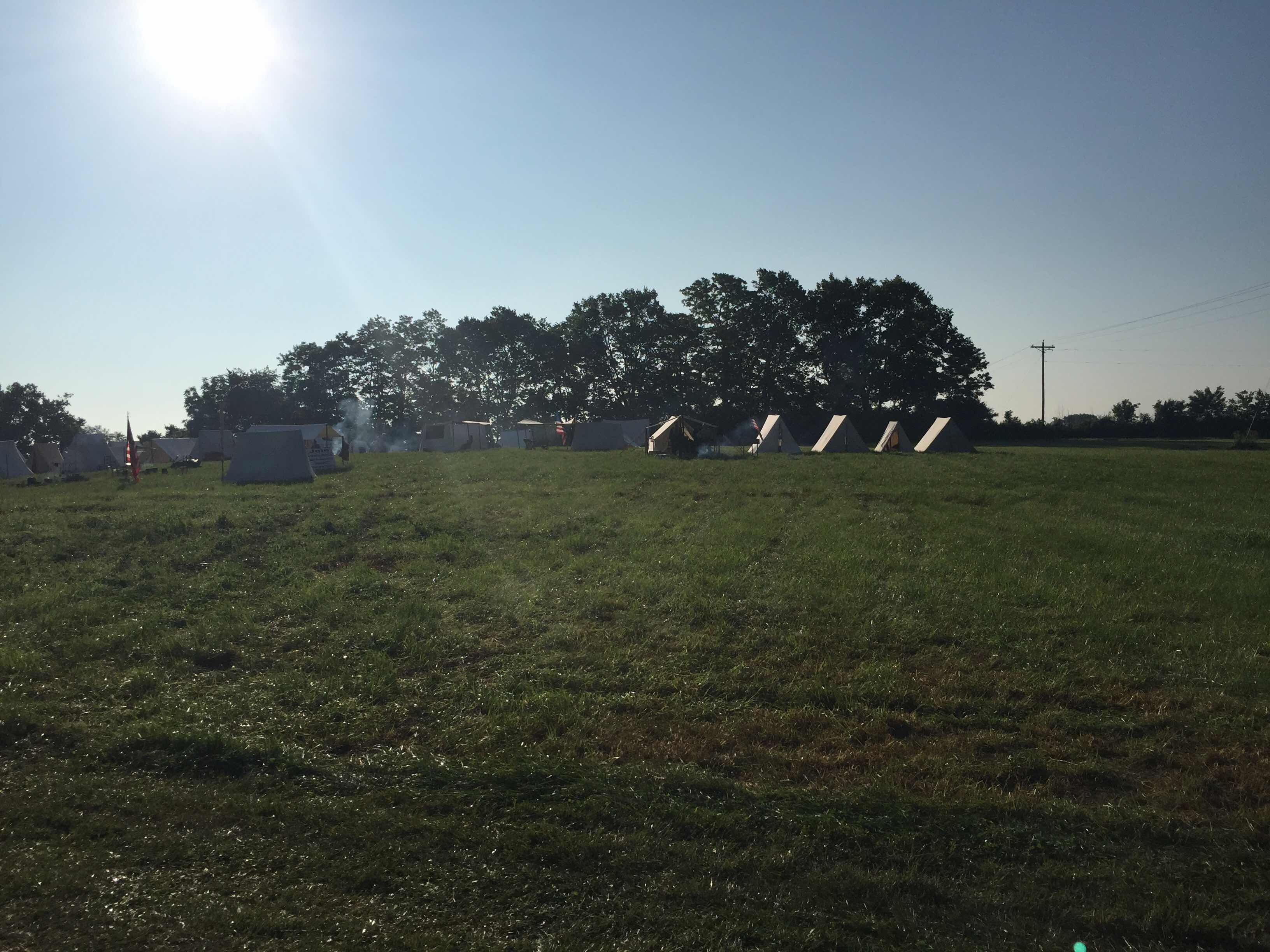 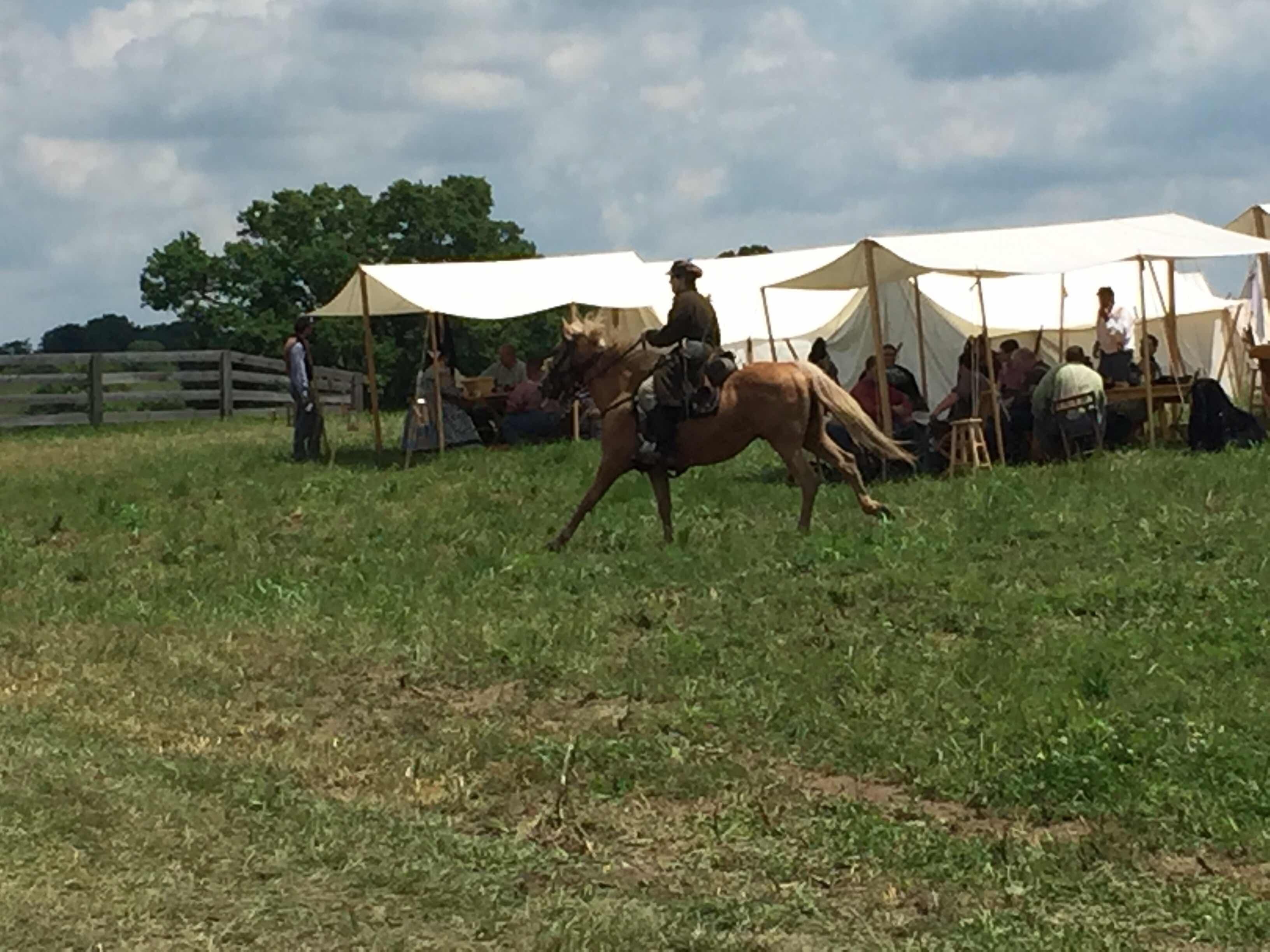 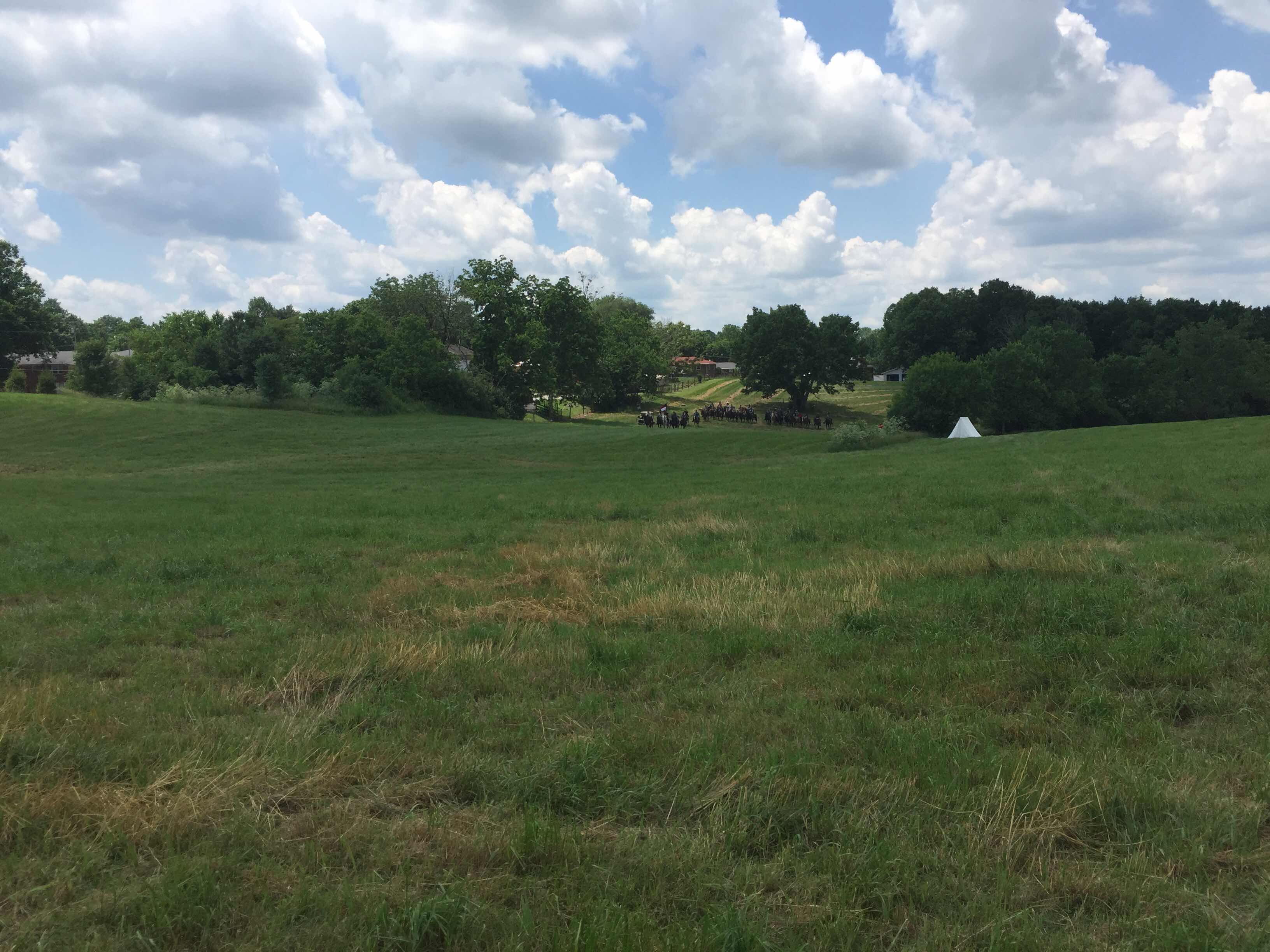 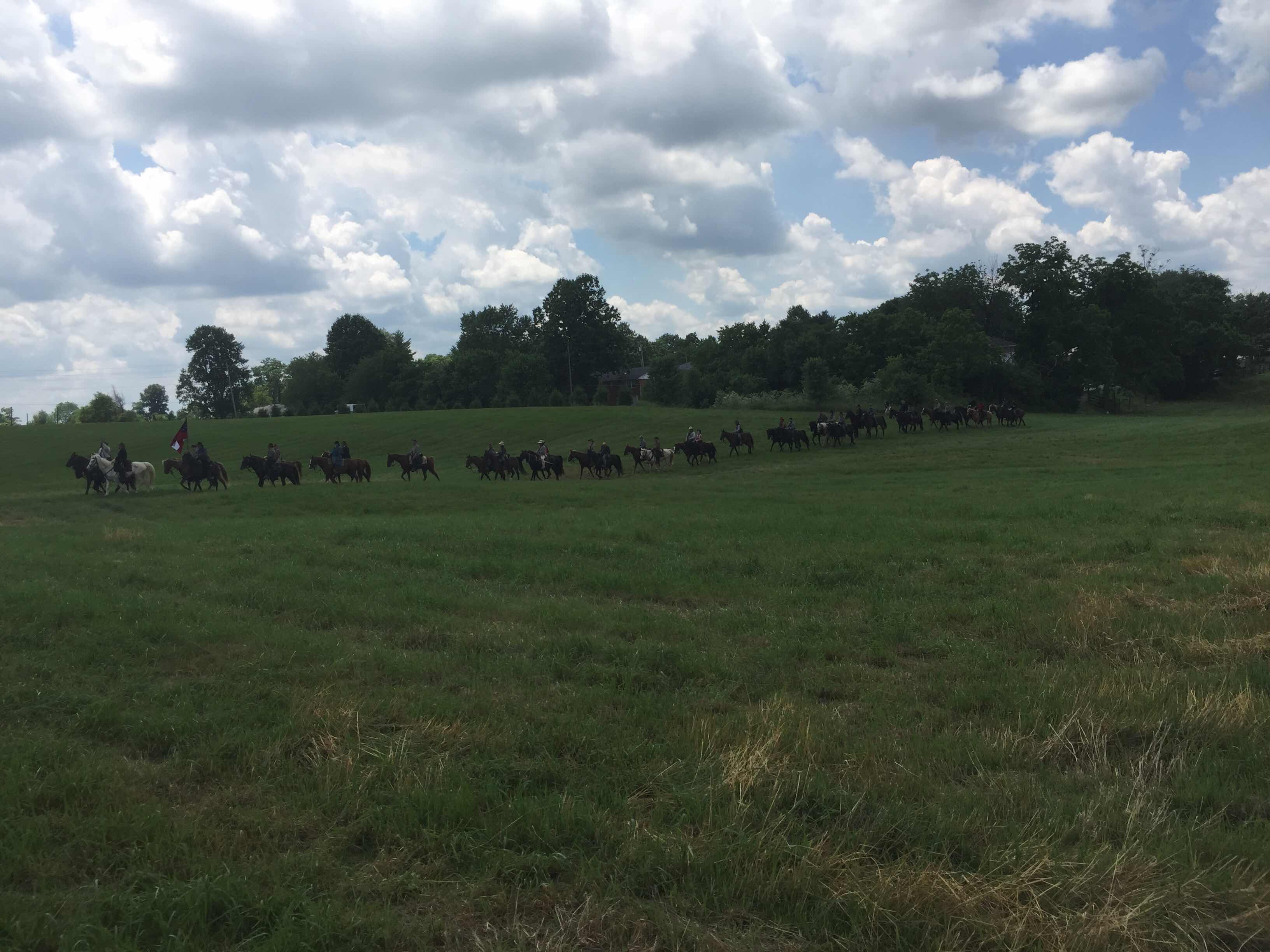 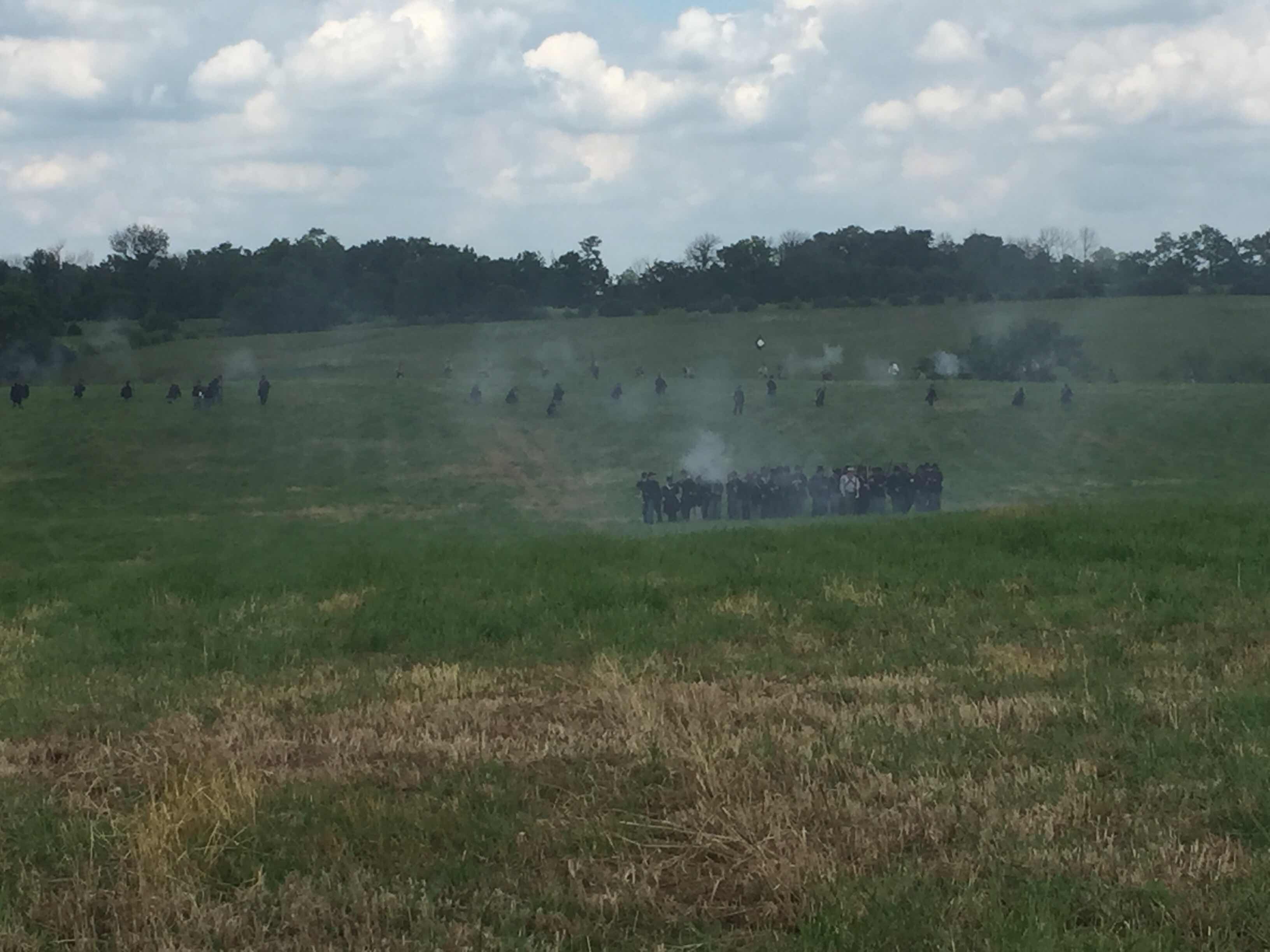