I stumbled upon this in the Cincinnati Enquirer of October 7, 1862, and thought I would share it.

I wonder how it did attendance-wise, especially with all the controversy the book had aroused and, at the time of this performance, the ongoing bloody war. Cincinnati  was in a “free state” and was a home to some abolitionists  but also was a hotspot for slave catchers and was not known for great feelings for African-Americans or abolition in general (it is located close to Kentucky, a slavery state at the time) so I was surprised to see this play advertised. Maybe a wave of patriotism for the war encouraged the opera house to host this show, but this was just a few weeks after the “Siege of Cincinnati,” during which Cincinnati police had originally refused to accept African-American volunteers for the defense of the city, saying it was a “white man’s war.” They soon reversed course and began rounding up African American men to force them to work on local defenses. Eventually local judge William Martin Dickson took charge of what was known as the “Black Brigade,” but the episode shows some of the racial issues Cincinnati faced.

Given the use of minstrels, I am sure that stereotypes of African-American behavior was part of the play, but that was likely true of theater throughout the entire country st the time. 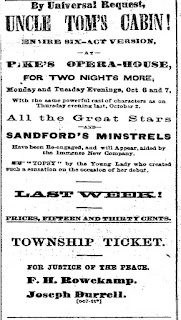