I saw this story on Facebook and thought I would share it here. It only includes a small  tidbit about the Civil War, but it is a neat story and a cool artifact. It is a belt bucket mold - actually, I believe it is only the female half of the mold - for a “US” Civil War  belt buckle.

I was lucky enough to see and hold this mold a few weeks ago and was surprised by how heavy it was.

Here are two pictures a of it, the second with a picture of an actual belt buckle. (This was at a historical society meeting, not a Civil War specific group, so the presenter included the photo of the buckle to help people see the finished product.) 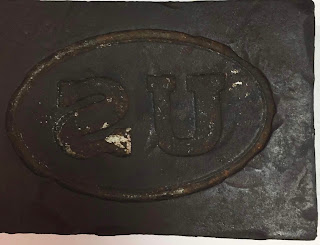 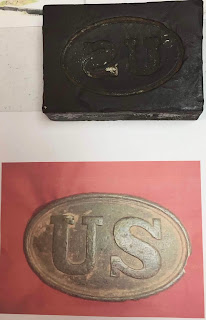 For those unaware, Newport is a city in Northern Kentucky, along the Ohio River, across from Cincinnati, Ohio. During the Civil War, it was home of Newport Barracks, a United States military installation, and several defensive positions were constructed in the area for the Siege of Cincinnati in September of 1862, so Union troops were certainly in the region during the war.

Who knows how this piece found its way into a house, but I am glad it was found by someone who appreciates history and is sure to preserve such an artifact. Other contractors may not have realized what a cool find this was.