Augusta in the Civil War Tour and Day

A few months ago, a new local movement began to help publicize and promote the Civil War Battle of Augusta of September 27, 1862 and to bring attention to the Civil War sites around that pretty river town.

The people involved in this group started a Facebook group called Augusta in the Civil War that I follow and recommend to others. It has been an active group, holding several meetings to plan how to promote the important actions in and around this area. Unfortunately, I have not attended any of these meetings, either due to other events/meetings on the same dates or just not feeling like travelling an hour away for another meeting. That is regrettable and I hope I can correct that in the future, but I did get to start such a correction on this past Saturday, April 13, as they held a Civil War Walking Tour and a Civil War Day, a prelude to a hopefully bigger event in September (September 27 - Brookville to Augusta - Duke's Approach and September 28 - Battle of Augusta Anniversary Event - see the Facebook page's event list for more info.)

It was a beautiful day and as I arrived in Augusta - my first visit there in literally decades, probably three of them, I realized what a pretty little city it is, especially on Riverside Drive, an appropriately named route alongside the Ohio River. I have lived near that river for a while, but the views I am used to are of the buildings and structures of Cincinnati on the other side, with bridges full of vehicles speeding from one place to another, but Augusta's views are of quiet hills - just starting to turn green as the annual rebirth that spring brings to the land ramps into full speed - and of a more natural, peaceful scene than my eyes usually witness. It is truly a pleasant spot just to stand and look and feel the nature, at least with weather as cooperative as Saturday was.

The tour that Darryl Smith (see Waking with History LLC.) led was wonderful. I have mentioned him before, but his combination of knowledge (thanks to terrific research) and enthusiasm for the war and related subjects make for a fine tour leader and speaker.

The tour lasted a bit more than 90 minutes. The walking was not long and was on mostly flat even surfaces -sidewalks and the small road - which helped make it fairly easy and more enjoyable. It was not hilly and uneven ground like at Perryville, nor very crowded even with over 70 people in attendance - a wonderful turnout. Every now and then, we had to move out of the way of a vehicle that wanted to use the roadway, but most cars saw the crowd and turned down other streets to avoid us. (At one stop, though, a car waved us through the crosswalk, though I don't know if the driver realized how many people would have to cross before she could move. 😄 ) The information given during the tour, especially the first person accounts, and the houses and buildings where we stopped were all appropriate and meaningful.

I stayed around town for a bit to get a bite to eat (and to rest my tired legs, to be honest) and look at a few of the displays for the Civil War Day. They had some nice banners with good information about the battle and some of its participants, and had a few re-enactors and collectors displaying various collections and items that soldiers carried during the war. It was not the biggest event ever, but the people there were friendly, helpful and very appropriate for such an event and there was a good energy around town, though perhaps that was due to the weather and me not having been there for  such a long time. From the view of an outsider and visitor (I have to say it was nice attending an event without helping organize it), it seemed to go smoothly for a first time event. I thought it was nice, a promising start that should help with planning for the September event. I even met a couple of presenters who may be able to help at Battery Hooper Civil War Days at the Ramage Museum in August

Here are a couple photos from the tour and the displays. 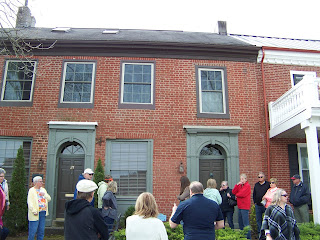 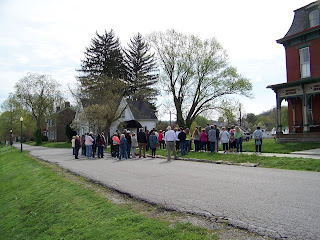 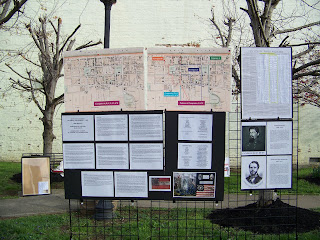 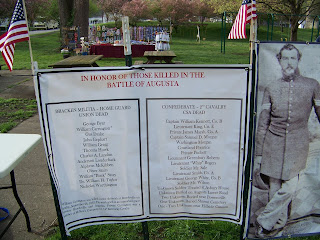 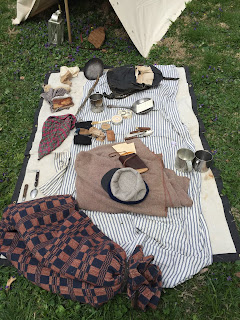