I was surprised and happy to see this news on Facebook yesterday. I shared it there, but wanted to create a quick post to discuss it a bit  more. I really appreciate all the preservation the American Battlefield Trust has done at Perryville over the years and adding even more land to the park is a terrific accomplishment. The park itself is a Kentucky state treasure and I love that it is being preserved and even enlarged. This was a major battle. It does not get the attention of the great Eastern Theater fights like Gettysburg or even some of the Western battles like Shiloh, but keeping Kentucky in the Union and sending the Confederate army back south was an important outcome. No major Confederate army ever penetrated so far north in the Western theater again (excluding raids, of course.) It was a  hard, brutal fight and Sam Watkins' thoughts about it in Company Aytch are good reminders of that, but the land itself - the hills, valleys and fields - are monuments to the toughness of the men who fought on that hot day. Nothing is better than standing on the actual battlefield and now that will be more possible with the addition of more preserved acreage. Huzzah!

This news  just makes me want to go back to Perryville this year. Perhaps May would be a good month if I find a nice enough day (as I notice how close to May we already are.) It should not be too hot yet but still should be warm enough to make it pleasant. I still have  not seen the most recently preserved land (the high tide of the Confederacy in the West) so I would like to see that and also get a better idea of where this land is, though I realize it will be a while before it is open to the public. I probably won't hike as much as I have in the past, but a quick trip to the museum plus some looking at a few spots would make for a fun outing.

The ABT will hold their annual conference in Lexington this year. I was really hoping to go, but just cannot make it work. Still, I am glad to have them in this state and see them still preserving land here. Kentucky was in a geographically fascinating place during the war and this state's war history (and post-war "secession") is equally fascinating. It pleases me to have a respected national group continuing to bring attention to Perryville specifically and Kentucky more generally.

Here are 2 of the many pictures I took there a few years ago, reminding me of the park's beauty and cleanliness.  I wonder if I should read Ken Noe's book about the battle again. It has been a few years since I did so. 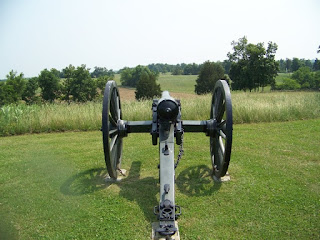 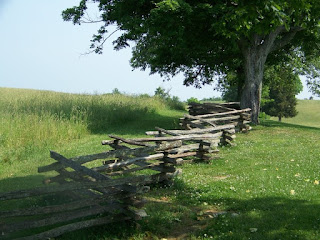