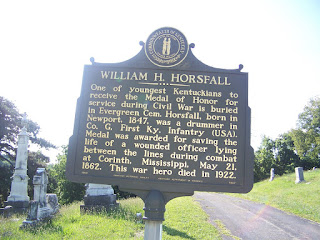 On May 21, 1862, William Horsfall was just 15 years old and, in his own words received a major assignment: "In the fighting before Corinth, Miss. May 21, 1862, Nelson's Brigade was engaged and my position was to the right of the First Kentucky, as an independent sharpshooter. The regiment had just made a desperate charge across the ravine. Captain Williamson was wounded in the charge and in subsequent reversing of positions, was left between the lines.

Lt. Hocke, approaching me, said, 'Horsfall, Captain Williamson is in a serious predicament, rescue him if possible." So I placed my gun against a tree and in a stooping run, gained his side and dragged him to the stretcher bearers, who took him to the rear."

This brave act earned a Medal of Honor for the young Kentuckian, who had been born in March of 1847. According to a local history website, http://www.rootsweb.ancestry.com/~kycampbe/horsfallcareer.htm, Horsfall had snuck away from home on the steamship Annie Laurie, which was then docked at Newport, Kentucky, across the Ohio River from Cincinnati. He remained hidden until the boat had started its journey, and then finally made his presence known.

He eventually enlisted as a drummer boy in Company G of the 1st Kentucky Volunteer regiment, at Camp Cox, Virginia.

According to A Compendium of the War of the Rebellion
by Frederick H. Dyer ( http://www.civilwararchive.com/regim.htm) the 1st Kentucky Regiment had organized in Pendleton, Ohio in early 1861, as Kentucky had declared its neutrality and was not officially enrolling troops for either side yet. This regiment spent much of its early years in the region now known as West Virginia, in the District of the Kanawa. It moved though the region, including Kentucky and Tennessee, before taking part in the Battle of Shiloh in April 1862, and then at Corinth the following month, after Henry Halleck led the Union forces to that Mississippi city.

The regiment stayed around southern Tennessee and northern Alabama for a while, then returned to Kentucky to campaign against Braxton Bragg. This operation ended with the October 1862 Battle of Perryville, after which the Southern forces left the Bluegrass state. In the next few years, these men participated in famed battles and campaigns like Stone's River, Tullahoma, Chickamauga and Chattanooga. This unit also campaigned against Confederate General and famed raider John Hunt Morgan. The 1st Kentucky Volunteer Infantry Regiment mustered out of service on June 1, 1864.

Horsfall went on to participate in the regiments' future marches, and found himself in trouble at Stone's River, where his sized may have stopped the enemy from shooting him before he ran away and made his escape.

He spent some time in a hospital in Nashville, before being discharged in Louisville in August 1864. He mustered into a Veteran Volunteer regiment in early 1865, just a few weeks before Robert E. Lee's surrender. He received a $400 bounty (a nice sum of money for a 18- year old (or for many older men) to have at once in those days!) and served until March of 1866. He lived for many years back in Newport and received a pension for his services.

Horsfall's medal of honor was presented on August 17, 1895 and the citation read: "saved the life of a wounded officer lying between the lines." This information was found at

To think of the bravery he showed by undertaking that rescue mission at the battle around Corinth is almost mind-boggling. It would have been incredible for any soldier, but it is even more remarkable that a 15 year old boy (well, young man – what he did was beyond the realms of a normal boy) was ready, willing and able to make the rescue.

In today's day and age, it might make people sick to think of a 15 year old serving in the military in places like Iraq, but William Horsfall performed such service at such a remarkably young age during his nation's greatest crisis. His sneaking off from home is not the story of a role model, but was the first sign of the courage he would soon display on the battlefield.

This once-young hero passed away on October 22, 1922, at the age of 75 and was buried at Evergreen Cemetery in Southgate, Kentucky