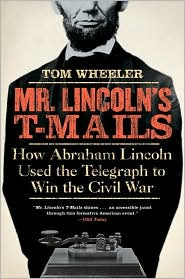 Mr. Lincoln’s T-Mails is an informative look at how President Abraham Lincoln took office less than two decades after the onset of this new communications technology and how Lincoln "applied the telegraph's technology to create advantages for the Northern war effort entirely on his own" since no previous American leader had established any precedent on how to use such a tool, especially in wartime (page xix).

Wheeler describes Lincoln's evolution in learning how to use this tool. In the first year of the Civil War, Lincoln used it very infrequently, but in the spring of 1862 experienced an epiphany that Wheeler calls his “electronic breakout." During this period, Lincoln communicated with generals in the Shenandoah Valley, offering them advice and orders on what to do to attempt to trap Stonewall Jackson, and also communicated with the main Union General in the east, George B. McClellan. Wheeler explores the frustrations Lincoln experienced in this period, trying to gain cooperation from these generals, but getting only refusal to follow orders, complaints, and, eventually, total failure to accomplish any of the Unions goals.


The third, and final phase of Lincoln’s growth in using the telegraph occurred in the final 13 months of his life, with what Wheeler referred to as the model for electronic management" (page 179). This was when Lincoln worked with Ulysses S. Grant, but instead of getting as involved at the strategic and tactical level as he had in 1862, he enforced the Union’s leadership structure and encouraged Grant to take care of issues that needed resolution. Lincoln asked that they be done, but did not give the same specific instructions as he had while trying to trap Jackson.


The book gives many examples of Lincoln using the telegraphs as his voice, eyes and ears, allowing him to express his views and concerns to his generals and others, as well as to hear hews reports of conditions in the field and communications from his generals, which often were nothing but complaints and excuses. Wheeler shows how Lincoln’s communications with Herman Haupt during 2nd Bull Run were very professional and helpful, while correspondence with George McClellan was not. To no one's surprise, the contrast between Lincoln's telegraphic communications with McClellan and Ulysses S. Grant is quite sharp.

"Electronic leadership" is another phrase Wheeler uses to describe Lincoln's employement of the telegraph, such as his attempts to create an entrapment for Stonewall Jackson in the Shenandoah Valley; as the title of chapter 8 proclaims, however "Even with Technology, It's all about People" as even the most advanced tools could not turn poorly performing officers into modern Napoleons.

Wheeler’s work also provides a nice description of how the speed of telegraphic messages could be harmful if the sender did not control his emotions, giving an example of a telegraph Lincoln had prepared for Ambrose Burnide in 1863, but that he later marked "not sent" on the back, very similar to his famous letter to George Meade after the battle of Gettysburg. (See pages 136-8 for details on this situation and pages 183-4 for Wheeler's description of the self-control required when using such a device. He praises Lincoln's recognition "that just because a capability exists, it is not always necessary or wise to exercise it.") For anyone in a modern office, that warning is virtually the same one given to those who use the current version of electronic communication.


Chapter 6 discusses “New Electronic Challenges” including the media’s access to the telegraph wires, which allowed them to get getting stories in print more quickly, sometimes providing a challenge to the government in terms of what information the public learned and when they learned it. Lincoln and the government were able to turn this to their advantage; one way was by allowing quick access to the reporters of the newly formed Associated Press with an understanding of the type of information they would report. The government also sent out information similar to the press releases organizations use today.


Other challenges included the ability of people to tap into the wires and the need to send important messages in code.


The final chapter of the book demonstrates how Lincoln’s use of the telegraph fit in with his other available styles of communications. His preferred method was face-to-face meetings, and if that was not possible, he usually turned to letter writing. The telegraph often was his third choice of communicating, especially for complex discussions or issues, yet he adapted to it and used it frequently when he needed to do so.


One recurrent theme in the book was how this communication melded with Lincoln’s management style, which Wheeler referred to as "management-by-walking-around." Communications by telegraph often resembled both sides of face-to-face conversations, so this new technology fit in well with Lincoln’s leadership.


Wheeler did mention Lincoln’s superiority in using the telegraph as compared to his Confederate counterpart Jefferson C. Davis at a couple points in the book, but did not provide detailed analysis of that claim. A comparison of how the two leaders used this technology could make for an interesting topic, but was not really within the scope of this work, so while I would like to see a bit more about it in this work, it is only a minor gripe.


Mr. Lincoln’s T-Mails is a book that anyone interested in the Civil War or Lincoln (or even in communications technology or related subjects) should read. The small paperback edition I read has only 186 pages (perhaps a book with more standard-sized pages would have fewer) and is an easy, enjoyable, informative and quick read. Lincoln’s writing has been a popular subject for books in recent years, but this one found a new way to approach that topic and shows Lincoln's ability to adapt and learn while on the job. Instead of using his telegrams only as sources of information, Wheeler explores how the actual use of this new tool was a grand step forward for mankind and particularly for American political leadership, thanks to the skills and willingness to learn of Abraham Lincoln.