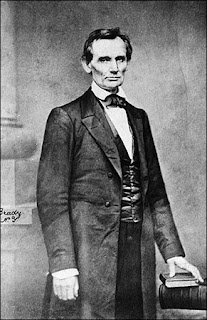 Below is a video from c-span of Sam Waterson re-enacting Lincoln's speech that day. It is long, but a very enjoyable watch, and it's not hard to imagine Lincoln's performance being similar to Waterson's excellent work.

Here also is a link to the text of that speech.

The famed last line is one of the strongest statements of Lincoln's career, even with the caveat "as we understand it" added to the end.

Let us have faith that right makes might, and in that faith, let us, to the end, dare to do our duty as we understand it.


(Note on the picture at the head of this post:  It is, of course,  the famous image of Lincoln, taken during his visit to New York. This was perhaps the first nationally-known and spread image of this westerner, likely the first view that many people in the east (or the entire country) saw of their future President.)