When the year 1863 is discussed in terms of the Civil War, the most famous events include  the battle ofChancellorsville  including the wounding and subsequent death of Stonewall Jackson,  the battle of Gettysburg with legendary names like Pickett's Charge and Little Round Top and  the battle of Vicksburg, ending on the 4th of July, with Union General Ulysses S. Grant earning even more fame than before. Don't forget the Gettysburg Address either.

Another event, however, also deserves our attention. 147 years ago today, Union General Ambrose Burnside, who had served with distinction along the coast of North Carolina early in the war only to follow that up with an unsuccessful stint at the head of Army of the Potomac, notable mostly for the abysmal defeat at Fredericksburg and the soon-to-follow Mud March, issued his infamous General Order number 38.

The most famous example of this order, issued while Burnside was in Cincinnati, serving as commander of the Department of the Ohio, was the arrest and trail of Northern politician Clement Vallandingham, who had earned his name as a "Copperhead" who strongly opposed the Lincoln administration's prosecution of the war and who favored peace. According to the previous link on the order, from ohiohistorycentral.org, Vallandingham was charged with "Publicly expressing, in violation of General Orders No. 38, from Head-quarters Department of Ohio, sympathy for those in arms against the Government of the United States, and declaring disloyal sentiments and opinions, with the object and purpose of weakening the power of the Government in its efforts to suppress an unlawful rebellion."

He was tried by a military tribune and quickly convicted, being sentenced to prison life for the remainder of the war. Lincoln was embarrassed by this incident, but to avoid publicly embarrassing Burnside, he simply commuted the sentence to banishment behind the Confederate lines. As expected, this punishment did not stop the war protester from returning north, where he ran for governor of Ohio, but lost convincingly, in 1863.

Much less known, but perhaps as important, and certainly sadder and possibly tragic, was the way Burnside's order affected William Francis Corbin and Jefferson McGraw. Both were arrested in southern Campbell County, Kentucky, not far from where I grew up, on the night of April 8, 1863, and taken to Cincinnati to be tried as spies. They apparently were tried under Burnside's Order number 38, even though it was issued after their arrest, leaving their trail and subsequent punishments mired in controversy. Were the arrests legal? Was it right to arrest them under Order 38, if that is what happened? Was their punishment justified under the law? Such questions remain open for discussion.

After Corbin stood trial, accused of recruiting Confederates behind Union lines (Kentucky remained a state  with loyalties on both sides, even in Campbell County, the northern and eastern borders of which rest along the Ohio River), both McGraw and he were sentenced to be shot on May 15, 1863. General Burnside approved the order, and President Lincoln signed off on it on May 4.

Friends and family made appeals on behalf of these young men, to General Burnside. Corbin's sister even traveled to Washington DC to try to meet President Lincoln, but failed to secure an appointment with him.

The appeals failed and the two young men were executed shortly after 1:00 pm on May 15, at Johnson's Island, near Sandusky, Ohio and their bodies returned to their old Kentucky home. Corbin was buried on his family farm, and McGraw in the cemetery of a small local church.

In 1914, the Basil Duke Chapter of the Daughters of the Confederacy erected a monument by McGraw's grave. (See the picture following this paragraph.)  What I find interesting is that the monument claims he was shot by order of the infamous Stephen "Butcher" Burbridge, who is often credited with (or blamed for) Kentucky's supposed "joining the Confederacy after the Civil War," thanks to his harsh ways in the Bluegrass State in 1864. Burbridge, however, did not receive command over Kentucky until 1864, when Corbin and McGraw were both in their graves, so it puzzles me why the UDC would make such a mistake on McGraw's grave. This is perhaps something that deserves more research, to confirm that it is a mistake on the monument and to try to determine why it happened. Still it does strike me as strange, but perhaps the 49 years that had passed since the end of the way obscured memories just enough to allow it to happen. 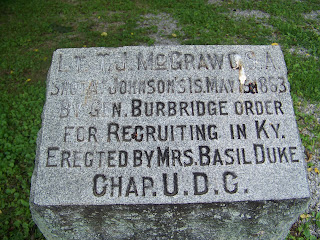 (I took this photo on a trip to the cemetery last summer. I did not think to bring anything with me to clean it off beforehand. What also might attract attention was the fact that somebody had placed a United States flag at the base of the monument, though it is not included in this picture. I'm sure some hardcore Confederates would not appreciate that, but perhaps it's a fitting tribute to the reconciliation that took place after such a long, hard, bloody war.)

Though these two men were fairly obscure, with no major battles participated in, or any famous feats of daring, their deaths influenced events far beyond mere discussion of the appropriateness of their arrest, trial and execution.

In an excellent blog entry from last summer, Civil War author and well-respected blogger Eric Wittenberg discussed the life of Union Cavalryman Henry Washington Sawyer. I had never heard of him before, but as I read the entry, I became enthralled as it came to the subject of the executions of Corbin and McGraw.

In July of 1863, about two months after the deaths of those two Confederates, Sawyer was one of two Union captains selected to be executed in retaliation for Corbin and McGraw's deaths. Wittenberg's entry give much more detail, but the controversy over these executions and potential retaliations kept growing as both governments tried to look out for their own soldiers. It eventually ended after the Union threatened to hang two more Confederate officers, one of whom was William Fitzhugh "Rooney" Lee, the second son of Confederate General Robert E. Lee.

After more posturing on both sides, the influence of the Lee name helped lead to a February 1864 compromise where both Confederates were freed by the Union and four Union officers, including Sawyer, were released by the Confederates.

It again amazes me that two such unknown, perhaps obscure, young men who lived not far from where I grew up, participated in events that ran so high that they even affected the family of a legend like Robert E. Lee.

And who knows how much of all that controversy was caused by Burnside's Order number 38? Had he not issued that edict, would Corbin and McGraw still have been arrested? They were recruiting in Union lines, so perhaps so, but even if that is the case, how would their trial and, especially, punishment differed? Would they have been executed without the existence of Burnside's order? If not, then how would the lives of Henry Washington Sawyer, Rooney Lee, and other prisoners on both sides have changed?

Clement Vallandingham was surely the most famous direct "victim" of Burnside's famous order, but as the fascinating story of William Francis Corbin and Jefferson McGraw shows, even the least-known soldiers and their lives can affect many other people, including those of more well-known name and lineage.

April 13, 1863 - perhaps not a day that "lives in infamy" but it's not quite another "ho-hum, nothing much happened" day either.