The Civil War, through the eyes of Rod Serling

So I took a day off work today, and after a trip to the gym, I'm sitting around the house relaxing and watching some episodes of the Twilight Zone on DVD.  It's a really good show and I enjoy it very much, even though I've seen every episode, some of them many times. The writers on this series did an outstanding job of telling stories, creating drama, and adding their own special "twists" to the endings of these tales.

I've noticed that several episodes of this series use the Civil War and that era for material. I found it odd at first that a science fiction show would rely on such a time period for so much material, but as I thought about it more, it came to make more sense. This show was produced at the end of the 1950s and early 1960s, right when the centennial of the Civil War was taking place, so why wouldn't the show capitalize on that? Plus, this war has always been a popular topic of Americans, so, again, it does seem unreasonable for Mr. Serling and the show's other producers and writers to take advantage of such a rich resource of potential story material.

One of the episodes about the war, and probably my favorite, is called The Passerby, where a wounded Confederate is traveling along a dusty road and stops by a woman's house to get a drink of water and some rest,. He remains there for a while, talking with the lady, a war widow who is missing her husband, as  more soldiers pass along this country lane. I won't give away the ending, in case anybody reading this has not seen it, but it is a typical Twilight Zone episode. The final passerby on this road is especially poignant.

Another episode featuring the Civil War is Still Valley in which a Confederate picket heads into a nearby town searching for Union soldiers reputed to be nearby. He does find a company of Union men, but none of them are animated at all. Unnerved by this mystery, the Rebel soldier looks around until he finally spots another person who is moving, an old man, carrying a large book. After discussing the situation with the man, the soldier finds that this man does not have long to live, but  he also that this man and his book may hold a key to ensuring Confederate victory in the war. He takes this information and the book back to his unit's camp, where the soldiers and officers discuss the pros and cons of using this potential weapon. This is another very good episode, and brings to the forefront the question of "win at all costs" versus an attitude of accepting what might happen, but maintaining your own sense of morals and values, win or lose.

An Occurrence at Owl Creek Bridge, based on the short story by Union veteran Ambrose Bierce, is probably the most famous and well-known of these episodes, telling the story of the last few minutes of a spy who was captured and is being executed. I remember seeing this one for the first time back in high school, and how the ending (again, pretty typical for the Twilight Zone) shocked me. It's absolutely fascinating how well they managed to tell this story through the medium of television.

Two other episodes I can recall both use the Civil War era as part of the story, though not the war itself as the main focus like the first three I mentioned do.

One of these is Long Live Walter Jameson, an episode in which people find out a local man is much older than they realize or can believe, with evidence from the Civil War era playing a key role in this discovery.

Another one is Back There in which a scientist (played by Russell Johnson, aka the "Professor" from Giligan's Island, another of my favorite old shows), travels back in time to April 14, 1865 to try to stop the assassination of President Lincoln. This brings up the age-old debate about even if time travel were possible, would it be wise to go back in time and change any event, either as large as Lincoln's assassination, or seemingly minute?

The Twilight Zone continues to fascinate me, and so when it's story-telling is combined with Civil War topics, it's just so much the better as far as I'm concerned. And if anybody reading this likes the show as much as I do, get the DVD collection of all the episodes. I received it for Christmas a couple of years ago and it's just awesome to be able to watch any of the episodes anytime I want. Here's a link to it on Amazon.com, though I'm sure there are other sources for it out there as well. 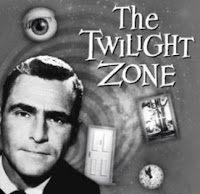