Pictures from my Perryville Trip

I did want to share a few of them here, with captions about what they show. They do a good job of illustrating the hilly terrain over which the brave men on both sides fought.

For more information on the specific happenings of the battle and the events I mention here, here is a good link. I especially like the "battle chronology" link on the left side of that page, but the "invasion, battle and retreat" choice is a good one as well, with articles written by Thomas L. Briener on each of those three aspects.

This first picture is near the entrance to the current state park, and is where Brigadier General Daniel Donelson and his troops began their advance upon the Union forces. 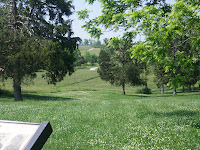 The Donelson's right was the position of General AP Stewart. Below is the photo of Stewart's position (you're looking forward from Stewart's postion) 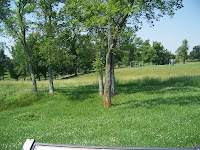 To Stewart's right were the men of General George Maney The hill visible in the opening between the trees is where the Union men of General William R Terrill were positioned, on what is known alternatively as :"Open Hill" "Open Knob" or "Parson's Ridge" 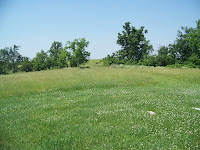 Here's a view from that ridge, looking back at the route Maney's men would come. 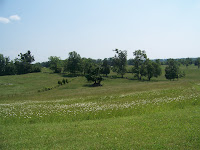 Terrill's men were inexperienced and soon retreated from this ridge, following this hill (the mowed area is the pathway the park rangers cut for the walking trail) At the bottom of this hill was the cornfield where men from Wisconsin were waiting to put up a fight, but they did get mixed in with Terrill's troops. Across the road is Starkweather's Hill, where the Union forces put up a stubborn resistance. The second picture below is of Starkweather's Hill, taken from the area of the cornfield. 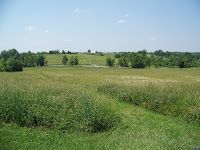 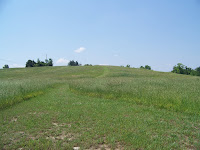 At this hill, a picture from the top of which is below, the Union fought stubbornly before being forced to retreat. Still their defense of this position delayed the Confederates long enough that it became late enough to convince General Leonidus Polk to call off any further attacks. 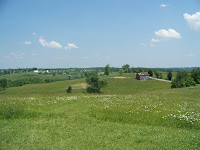 Meanwhile, Donelson's attack eventually reached to the area of the Widow Gibson's cabin. The next three photos show two of the areas of the filed Donelson's advance covered. The middle photos shows an area from which Union troops fired upon Donelson's men. 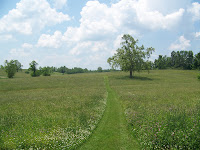 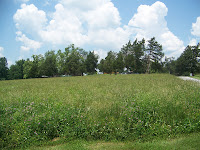 Stewart's attack made it to this hilltop. On a ridge in the distance is where Union troops under command of Colonel Leonard Harris fired back at the Confederates. 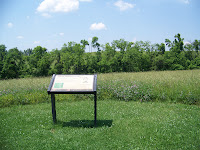 These photos were from most of the "short loop" of the walking trail available in the state park. I took some other pictures as well, from different points in the park and different points of interest in the town and will post them in another entry, as this one seems long enough.