Book Review: The Men Stood Like Iron: How the Iron Brigade Won Its Name 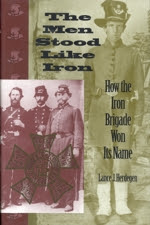 The Men Stood Like Iron: How the Iron Brigade Won its Name
Lance J. Herdegen
copyright 1997
Indiana University Press
I picked this book up at a used book sale earlier this year as it looked like an interesting topic.Now that I have finished reading it, I have found that my initial instinct was correct in this case.
Lance Herdegen does a fine job in this book detailing how the unit that became known alternatively as the "Black Hat Brigade" the "Iron Brigade" or the "Iron Brigade of the West" came together in the summer of 1861 in the midst of a patriotic fervor following the firing at Fort Sumter, how it developed over the next year-and-a-half and how its hard, determined fighting at fields such as Brawner's Farm, Second Bull Run, South Mountain and Antietam won this unit its name and fame.
Herdegen obviously did a lot of research on this book, relying on period letters, diaries and post-war memoirs for much of the material.
He begins the book with an introduction of events just after the battle of Gettysburg in July 1863, then goes back to 1861 and starts into the initial formation of this western unit. After that beginning, which was effective, though it could have been even better (more on that later), the rest of the book describes the unit's history and action chronologically.
The book is very readable, enjoyable and informative. I read it (218 pages) fairly quickly and usually read a chapter or two at a time. It has 24 chapters and then has end notes. The end note section listed the pages the notes were on at the top of the page, which was helpful. The notes themselves were also informative, occasionally adding information that could not fit into the text. At some times, it was tough to tell if all the quotes in the paragraph or on a page were from the same source, but that was not a big deal to me.
The author does a good job of describing how an unit could "not see the forest because of all the trees" while in battle. The description of the end of Second Bull Run is especially outstanding in this regard. After the unit fights a long and hard battle, it soon is surprised to discover that the Union Army has been routed and is in a near panic, a sharp contrast to how the Iron Brigade stood and fought.
This book does seem to discuss  story of the 6th Wisconsin regiment more than the brigade's other units (2nd Wisconsin, 7th Wisconsin, 19th Indiana, and, eventually the 24th Michigan) and I found the constant referring to every soldier's hometown to be a bit unnecessary, but those are very minor quibbles.
My least favorite aspect of the book, however, was the sudden end. After discussing the unit's battles in great detail, Herdegen describes Lincoln's removal of McClellan from command and how the surviving men in the Iron Brigade reacted to it - and then the book ends.
That discussion was a good addition to the book, a creative way of showing this unit and its commitment to continue to fight without discussing an actual battle, and the comments about some of the officers thinking about resigning in protest were very thought-provoking, but I thought there was room for more this book to continue after this section. There was no information about Fredericksburg or the battles of 1863, including Gettysburg, where many believe this unit finally ceased to exist after so many hard fights.
This brings me back to the point I mentioned above about how the first chapter dealt with the unit in the aftermath after that legendary battle in Pennsylvania. I understand the subtitle "How the Iron Brigade Won Its Name" and can see how describing battles after this name had been earned would be in violation of that pledge of the book's purpose, but the way it ended made the introductory chapter seem like an unfulfilled tease. Another chapter - even a brief one - with additional coverage of the time leading up to Gettysburg, would have been a natural way to wrap up the book and tie it all together. Without such a chapter, the beginning of the book is not as effective as it might have been.
Despite that small gripe, however, I found the book to be a very fine addition to my library and one that I am glad I purchased and read. For those looking for a western perspective on some of the more famous early-war battles in the eastern theater, this book can provide some valuable insight. I gladly recommend this one to others who like reading about the Civil War.