Little Bo-Peep and Her Foolish Sheep: an Anti-Secession Editorial Cartoon 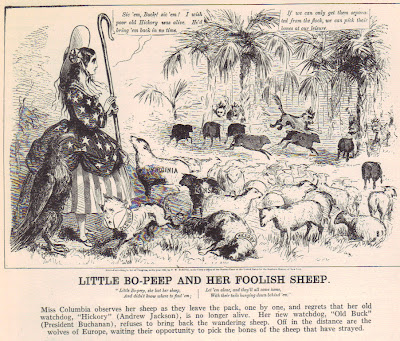 This anti-secession cartoon is from page 167 of Abraham Lincoln: The Year of His Election by Albert Shaw (The Review of Reviews Corporation, 1929). It is listed under "Strong's Dime Caricatures. - No. 2."

The small line above the cartoon title reads "Entered according to Act of Congress, in the year 1861, by T W Strong, in the Clerk's Office of the District Court of the United State for the Southern District of New York."

Immediately under the editorial's title are the lines from the nursery rhyme:  "Little Bo-peep, she lost her sheep, And didn't know where to find 'em; Let 'em alone, and they'll all come home, With their tails hanging down behind 'em."

The description reads: "Miss Columbia observes her sheep as they leave the pack, one by one, and regrets that her old watchdog, "Hickory" (Andrew Jackson) is no longer alive. Her new watchdog, "Old Buck" (President Buchanan), refuses to bring back the wandering sheep. Off in the distance are the wolves of Europe, waiting their opportunity to pick the bones of the sheep that have strayed.

In the cartoon, Columbia is saying "Sic 'em, Buck! sic 'em! I wish poor old Hickory was alive. He'd bring 'em back in no time."

The "wolves of Europe" are saying "If we can only get them separated from teh flock, we can pick their bones at our leisure."

It is hard to see on this scanned image, but the dog immediately at Columbia's side has a collar with "Old Buck" on it, while the collar on the one lying down reads "Hickory."

On the sheep, the only labels are "Virginia" with "Kansas" imprinted on the black sheep.

Here is a link to information from the Library of Congress about this cartoon.