Book Review: Brother of Mine: The Civil War Letters of Thomas & William Christie 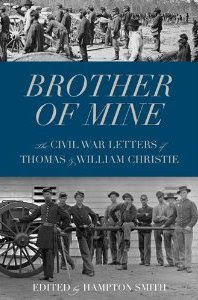 William and Thomas Christie were half-brothers, born 13 years apart in Scotland. Their family immigrated to the United States in 1848 and took up residence in Clyman Township, Wisconsin.

When the Civil War broke out, their father did not wish them to enlist, but in November of 1861, William and Thomas chose to join what was intended to be an infantry company, but what became the 1st Minnesota Battery of Light Artillery.

Over the next four years, they wrote many letters home, to their father James, brother Alexander (called Sandy) and sister Sarah. Many topics were mentioned as these long-distance conversations continued, sometimes with interruptions due to the brothers' military involvement. Hampton Smith, a reference librarian at the Minnesota Historical Society, took advantage of that society's treasure-trove of information from this family and its descendants, and complied the letters these brothers wrote during their Civil War service into this fine volume.

Both brothers wrote frequently, but it seems like Thomas, who was the more educated of the two, wrote more often, especially towards the end of the war. (Of course, William being captured by the Confederates stopped his writing efforts for a while.) . In William's writings, he often expressed a lack of confidence in his writing skills, and the spelling and grammar of his letters do show less formal training than what his brother had received. Still, he continued to describe his feelings and the sights, sounds and events of everyday life to the best of his ability, and we modern-day readers certainly benefit from that.

Both young men expressed concern for their family, struggling on a farm, now with two fewer sets of hands to help with all the necessary work. They also took interest in their younger siblings and their lives, discussing Sandy's desire to enlist in the army and Sarah's education and her eventual role as a "school marm."


Both men wrote frequently of topics from camp, including the boredom of garrison duty (such as around Vicksburg), the weather, their health, and any friends or family in the service. Each brother often mentioned the other in his letters.

In a sense, it seems strange that they addressed each letter to an individual, because many of their missives encouraged the recipient to share the writing with the entire family. At some point, I wonder why they did not just address the letter as "dear family" but maybe they liked the personalization of addressing a specific person (perhaps out of the oft-expressed hope that each person at home would write back frequently.)

This book provides a wonderful glimpse of life in camp and the kinds of thoughts these soldiers had every day. While in garrison duty, they frequently requested their sister to send them music so they could learn and sing new songs; they mentioned daily activities like base ball, cricket and quoits (horseshoes); they participated in a literary society formed by the soldiers around Vicksburg; and they wondered and worried about the family back home in Wisconsin.

There are times when the letters are long and seem to drag along a bit, ,but even these show their concern for their families or the challenges they faced being so far away from home. They mentioned that soldier life was not always full of "glamor" and some of the letters make that point very clear.

Throughout the book, both brothers make it clear that they believe slavery to be the cause of the war, and that its abolition is important. They offer support for the idea of using African-American troops as well. They do sometimes use colloquialisms of the time, such as "darkey" (and even the "n-word") when referring to African Americans, though "black" and "colored" are their more frequent choices. What caught me off guard, though,  was a letter Thomas wrote in September 1864 that expressed his many misgivings about the abilities of African Americans to adapt to freedom and govern themselves (due both to their nature and to their unnatural confinement in slavery for so long). He also comments that most men he knew felt slavery should be ended more because of its effects on whites than on the enslaved race. I realize those sentiments were not uncommon at the time, but I was surprised to see them in this book as nothing in the previous letters had hinted at this belief.

One thing I really like about the book is the presence of footnotes. That is not a common sight in books these days, but they proved to be convenient and helpful in this book. Most of them identify people or places mentioned in the letters, with a few adding information about the military campaigns or events.

I do wish this book included a photograph of the brothers, but maybe none exist. In a couple of letters they mention the possibility of getting a picture taken, but the price was too high, and it may not have been convenient to do so, so maybe they just never had any taken during the war.

Despite that, this is a very fine book that provides a fascinating look at the military lives and experiences of two ordinary soldiers in the Union army, how they looked at various events and what they considered to be important enough to note, such as sightings of Generals Grant and Sherman and Thomas' brief experience under arrest. It is a very enjoyable and informative book and offers a wonderful insight into the lives of these young patriots.

**Thanks to the Minnesota Historical Society Press for providing a review copy of this book.**