The Youth's Companion: A Deserter Shot

Here is another story from the Youth's Companion magazine, this one dated April 14, 1864. It gives some good details on how an execution was carried out during the Civil War.

I have not yet confirmed that a Joseph Stroble was a member of the 55th Pennsylvania Regiment, but the National Park Service's Soldiers and Sailors System does confirm that this regiment was stationed in or near Beaufort, S.C., from late 1862 until 1864. It is possible that this young man's name does not appear on the list of regiment members because of his crime and execution.

Another link I found shows only a James Murphy having been executed from the 55th Pennsylvania before this article was published. Did the author of the article get the wrong name or just the wrong regiment?  Even without this detail, the description of the process is still worth reading, but having that type of detail would just add a bit of "human touch" to the story.


Death is the penalty for desertion from the army. It is a severe punishment, but as the efficiency and oftentimes the existence of an army depends upon the prevention of desertion, the most effectual means must be taken to secure it, and the fear of death exerts upon most minds the greatest power of restraint. A clergyman at Beaufort, S. S., describes the shooting of a deserter at that post, of which he was a witness:


Joseph Stroble, a member of the 55th Pennsylvania Regiment, was tried by court martial for "desertion and attempting to enter the rebel lines," convicted and sentenced to be sot, at Beaufort, S.C., at three o'clock P.M. At two o'clock all the military of this post were drawn up in order, formed in two lines on three sides of a hollow square. Through these lines, about twenty feet apart, the condemned man rode beside the chaplain, in a cart. Four soldiers bore his coffin in front of him, and his executioners marched behind him, with laded muskets, while the ban, with muffled drums, played a solemn dirge. After the condemned man had passed through the lines, in plain view of every soldier, he halted at the fatal spot designated for his execution. The coffin was borne forward ten paces in front and placed upon the ground. The chaplain and young Stroble advanced together and knelt beside the coffin. A prayer was offered in his behalf. They arose, and the prisoner read, in a clear, strong voice, a paper confessing his guilt and the justice of his sentence, and that he had lived a thoughtless and wicked life, regardless of God or his soul, and in the name of Christ implored pardon. The chaplain read the colloquy between Christ and the two thieves, and they both knelt again beside the coffin, and both offered vocal prayer.


He arose, shook hands with the provost marshal and his spiritual adviser, calmly took off his blue overcoat and laid it on his coffin. He was not pinioned for hoodwinked, at his own request, but stood erect in a soldier's position, at the head of his coffin, and ten feet in front of seven soldiers detailed as his executioners. He put his hand to his left breast and said, "Aim there." The word of command was given, and six minie balls passed through his body, and his soul was launched into the presence of his God.


Each regiment then marched in rank and file past the body of the deserter, while the band was playing a solemn dirge with muffled drums. It was truly a sad and heart-aching sight to see a young man thus violently hurried into eternity, but no malice or revenge could have dictated his death. H attempted desertion to the rebel lines under the most aggravating circumstances; and had he succeeded in his plot, the streets of Beaufort might have been drenched in blood by a rebel raid.


Awful as this extreme penalty of military law may seem, yet is, I am convinced, a necessity, as a terror and warning to those who contemplate desertion.

The following illustration was in the December 28, 1861 Harper's Weekly, courtesy of www.sonofthesouth.net 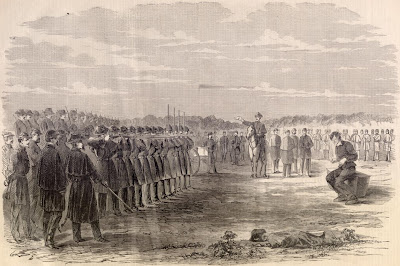