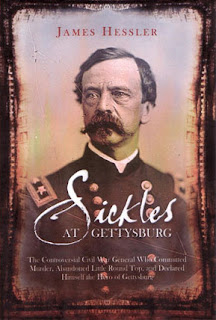 Sickles at Gettysburg: The Controversial Civil War General Who Committed Murder, Abandoned Little Round Top, and Declared Himself the Hero of Gettysburg
by James A. Hessler
copyright 2009, 2010
Savas Beatie
One way to produce a fascinating book is to start with a fascinating story and Gettysburg Licensed Battlefield Guide James Hessler certainly chose such a story for what turned into a wonderful book.
Sickles at Gettysburg is a biography of lawyer, Congressman and Union Major General Daniel E. Sickles. It focuses mainly on the second day of the Battle of Gettysburg and the controversy afterward of course, but also describes his life before the war as well, giving insight into how he lived and how the controversies during and war and after the war really should not have been too surprising. He simply was a man who could not avoid such issues in his private or public life.
The controversy around Sickles, as explained in this book, starts with when he was born. Was it 1819? Or 1823? Or some other date? No one seems to know for sure, but for such questions to arise over his very beginning seems to foreshadow how the rest of Sickles' life would unfold.
Hessler's writing is very clear and easy to read, and the book is very well organized. The photographs and maps included throughout the text are very helpful. I often turned back to a previous map to help me understand where certain actions were taking place.
This work does not come off either as a Sickles apology or "hater" - Hessler does a very good job of showing both sides of the controversies and offering evidence for every side of the story, which, in come cases, are much more than just two sides (even when coming from the same source). He points out how Sickles consistently overcame adversity (even when of his own making) but also demonstrates how the general could change his story to suit his needs.
That is one way in which this book does an outstanding job of showing the human side of Sickles. This is not simply a biography of a soldier or a politician - it is the story of man who held various positions of influence and power, but who had his share of very public flaws. The last page of the book quotes a commander of a Sons of Union Veterans Camp, including the phrase "he was a real person with real problems and real struggles that we can all identify with." (page 406) That is an excellent description of the story of Sickles and is applicable to how the author covers Sickles throughout the entire book.

One enjoyable and enlightening section featured the author reviewing the evidence to determine if the legend of Sickles smoking a cigar as he was carried off the field - supposedly to help lift the spirits of his troops - was true. He examines several descriptions of Sickles' wounding, from the time it happened and from many years later in order to reach his conclusion, which I will not mention here.
I also must admit that while reading about Sickles in this book, I also learned quite a bit about the fighting on July 2 at Gettysburg. I have never been totally absorbed in the military details of battles (whose regiment went where against whose division, etc.)  and recognize that as something I need to study more, but the way Hessler describes the fighting - and the maps included throughout the book - really helped me understand what happened on that part of the battlefield on that day and why Sickles' decision was so controversial.
Hessler also describes Sickles' important role in the establishment of Gettysburg as a national military park, which was something new to me, as I had not realized that he took so much interest in preserving the battlefield and memorializing the men who had fought there. This book discusses this part of Sickles' life very well, providing a lot of interesting information and details about Sickles' action,s in and out of Congress, to support the preservation of this land.
That last point is part of the conundrum of the life of Dan Sickles. He was an unfaithful husband, who murdered his wife's lover, a poor father, a general who made a very controversial decision, then attacked publicly others who did not agree with his choice (even after they had passed away). He was very self-absorbed and egotistical, and never mastered the skills of handling money well (either his own or money he was entrusted with for the benefit of others), yet he also inspired confidence and admiration in his men, and then was a key figure in helping preserve that hallowed ground in Pennsylvania.
(I must pick one minor nit, though. In the book, the author occasionally refers to the book's subject as "Dan" instead of "Sickles." There's nothing wrong with that, but it is different and did stick out to me several times.)
Sickles at Gettysburg  is simply a very good book that is both very informative and readable and is one that will be added to my list of favorites. It comes across as a well-researched and studied account of the many complicated aspects of the life of a controversial figure and is one I happily and strongly recommend to others interested in the Civil War or American history.

(P.S. For a visual record of Sickle's actions at Gettysburg, visit the  Gettysburg Daily site and in the search box in the right column - page down a bit - type in "sickles." It will bring up a series of posts featuring Jim Hessler at different Sickles-related locations on the battlefield. These entries do include photographs as well as text,  but I found the videos embedded in each entry to be especially helpful in understanding the lay of the land. These videos served as a wonderful supplement to the book.)