Book Review: The Supply for Tomorrow Must Not Fail 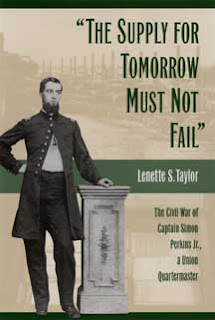 The Supply for Tomorrow Must Not Fail: The Civil War of Captain Simon Perkins Jr., a Union Quartermaster


Lenette S. Taylor
copyright 2004
The Kent State University Press
Quartermasters in the Civil War armies held a position much like that of a baseball umpire or basketball referee, in which they were likely to be noticed only when something went wrong.  It was a tough, convoluted, mostly thankless, yet extremely important job that both armies desperately needed to have performed competently.
Lenette S. Taylor does a terrific job of showing just how complicated and confusing the role of quartermaster could be. Using papers belonging to Captain Simon Perkins Jr., which have miraculously survived the decades since Perkins left the Union army, as well as many other sources she was able to locate, Taylor tells the story of this positions through the war adventures of this one specific officer.
Taking advantage of the rare remaining quartermaster paperwork, Taylor describes the many responsibilities Perkins shouldered throughout his stint of just over 2 years as a quartermaster. He was in charge of forage for animals, of transportation arrangements, of finding rooms and housing for officers and workers. He occasionally was in control of local depots, or of forming new supply stations and  starting new ones at new locations. Building new buildings, cooperating with railroad authorities, dealing with changing river levels and Confederate threats - all of these were among the responsibilities he assumed, sometimes even when a particular task may not have technically been in his official job description. He simply did what had to be done to help the army.
Movements were frequent. He did work in and around Nashville for a while, but also had to work at other stations such as near Shiloh, or Tullahoma, or Gallipolis, Ohio. He almost always had people under his employ, sometimes dozens at a time, and he needed to hire, control and pay them.
Dealing with money and accounts was a key duty of almost all his positions. For much of the time, the government had not allocated funds to pay army expenses, so he had to offer vouchers in return for goods or services. This often created hardships for the recipients of these vouchers, who did not know when they would get paid. This was a constant issue Perkins had to confront.
Though the story of Perkins himself is quite interesting, starting with his family political connections, including his uncle David Tod, Governor or Ohio, and Perkins post-war economic successes in Pennsylvania, Taylor's book is most fascinating for the many details of a quartermaster's job, the frequent changes, sometimes with conflicting orders from various generals, trying to supply large armies which were frequently traveling miles away. There are too many such obstacles and responsibilities for me to try to name them all (or even most) in this review, but The Supply Must Not Fail does a terrific job of illustrating the various roles a quartermaster played and how the army, including generals, depended on these men, despite the fact that most armies did not have enough men filling these roles.
One interesting aspect is that quartermasters remained at the rank of captain. Only a select few were ever promoted (to Lieutenant Colonel) no matter how much work they did or  how effectively they did it. It was not a job for glory or glamor, and was not one that just anybody could do.
This book is a very  informative and eye-opening account about the quartermaster's unsung role in the Civil War. Simon Perkins Jr. was a hard-working, effective officer and his story shows how many challenges a man in his position had to face every day of his employment. The army needed equipment and supplies in order to move and to function and men like Perkins put in the effort to allow that to happen, despite knowing they had little chance of promotion or recognition.