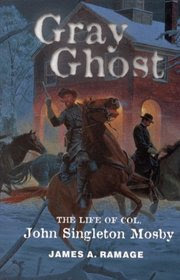 When I wrote a review of Sickles at Gettysburg I began by stating that "one way to produce a fascinating book is to start with a fascinating story" and I found that James Hessler had done so with his work.

James A. Ramage used the same philosophy with this comprehensive biography of Colonel John Singleton Mosby, the famed head of the "Mosby's Rangers" Confederate unit during the Civil War. Mosby was certainly a far different person than Dan Sickles, but, like the Union general, he lived a long life and earned his fame not only during the Civil War, but also in the several decades after the war ended. (Plus, both were involved in long post-war controversies over the happenings over the campaign and battle of Gettysburg.)

The book begins with a chapter that touches upon many of Mosby's feats during the war and the philosophies Mosby used. This is a very effective introduction to this man and soldier and sets the state for the rest of the book, which starts with a discussion of Mosby's family history and then his youth, when his small size and  health issues often left him a victim of bullies. This early discussion shows how this childhood and its challenges developed Mosby's personality and his attitude about fighting, even when an underdog. Dr. Ramage even claims that Mosby developed two distinct personalities that would remain with him for the rest of his life - a peaceful, studious and kind side, contrasted with the fighter, willing to face any challenge.

Mosby eventually was able to attend the University of Virginiaa where his personality earned him a negative reputation. When he was put on trial for shooting a well-known local bully, most of the jurors sided with him, but his reputation convinced enough members of the jury of his guilt, leading to a conviction of unlawful shooting, with a fine and a 12 month jail sentence. This was a major event in Mosby's life, and the treatment he received in the trial and by the university was something he would always remember. It also is a perfect example of his willingness to face large challenges and challengers, which his small band of rangers would do frequently in his future.


This book describes how Mosby, like many others, experienced conflicting emotions about the coming of the Civil War, at least until Virginia seceded, which ended any question he had about which side to support. It describes his early military days, and how being in the open air actually improved his health, even when he slept in the cool outdoors. He started learning his military values under Grumble Jones before moving to the command of Jeb Stuart, the most famous cavalryman of the war. This work shows how both men influenced Mosby, how he appreciated each and how both valued his services before he ended up on Stuart's staff.

Gray Ghost demonstrates how Mosby learned to scout effectively and gather information that Stuart found valuable and forwarded to Robert E. Lee. When the Confederate Congress passed a Partisan Ranger Act, Mosby  became interested in taking advantage of that opportunity. He eventually got the chance, thanks largely to support from Confederate Secretary of War James Seddon. Dr. Ramage does a fantastic job of showing how this happened and how Seddon's support was vital to Mosby being allowed to form and then keep a company of partisans, despite the poor reputation such soldiers had earned throughout the south.

Included in the discussion of Mosby's development as an effective scout and ranger are a couple of examples where failure taught him lessons, such as in the difficulties of raiding against a railroad or the different responsibilities required in including a cannon with this band of men.

As the Civil War ended, Mosby avoided surrendering as long as he could, first of all waiting for Joe Johnson to surrender in the Carolinas, then waiting for appropriate treatment and terms from the Union forces in the area. It was during this time that Mosby developed a respect for U.S. Grant, which in turn created a relationship that would serve Mosby both good and bad in the future.

The discussion of Mosby's Civil War career is the essence of this biography. The analysis of the strategies Mosby used in his guerilla warfare is especially valuable.  Dr. Ramage describes Mosby's use of secrecy, how he took advantage of darkness and/or poor weather, how he and his men portrayed Union soldiers even without the use of Union clothing, and how Mosby quickly realized that the days of using sabers for cavalry charges were gone, thanks to the presence of revolvers. His "take-the-offense" approach, even when the enemy seemed to have the advantage, was another common tactic and this book details how and why this worked so often. Mosby and his men practiced a very true form of guerilla warfare, not acting as lawless bands of marauders (though Union citizens and officials may have disagreed) but as an actual military unit practicing legitimate military methods to achieve military goals. Dr. Ramage emphasizes Mosby's desire to use fear and to multiply that emotion among Union soldiers as being a key part of his approach.

Gray Ghost follows its tellling of the tale of Mosby's Civil War career by moving on to the fascinating story of his post-war life, where this Southern hero became almost persona non grata in his home state, thanks to his decision to support the Republican party and many of its leaders. It discusses how he used his Republican party contacts to help find him employment and how he established himself as a reformer in some of these jobs. Despite his fame and his many jobs, he never saved any money, thus whenever one job ended, he found another until he finally retired in his mid-70s, living with some of his children and grandchildren.

During these years, Mosby turned to writing to tell  his memories and sides of the war, especially Lee's second invasion of the North. This was the "Gettysburg War" he waged with many opponents over Jeb Stuart's actions during the days and weeks before the battle. Mosby, the southerner who had lost his Virginia friends due to his support for Ulysses S. Grant, further hurt his reputation in the commonwealth when he dared criticize Robert E. Lee, the ultimate Confederate hero. Here again, his willingness to take on any fight when he thought he was right shows itself, just as it had in some of the reforms he favored from the consuls in Hong Kong to the plains of Nebraska, and as it had throughout his life, starting with his refusal to allow bullies to intimidate him in his youth.

I found the last chapter The Gray Ghost of Television and Film to be an outstanding addition to the book. This discussion of Mosby's image in popular culture, from portraits, silent films, books and television provides an outstanding perspective of his image in popular culture in the final decades of his life, including the ups and downs of his reputation, fame and popularity. This was a wonderful section and a great way to describe Mosby's legacy.

Following that chapter may be an even more valuable addition, a brief "conclusion" which analyzes and summarizes Mosby's military effectiveness. This may have been the best part of the book. The entire work is wonderful, but adding this recap - after the chapters on Mosby's postwar life and his image - simply wrapped the book up in a wonderful, informative manner.

The book then finishes with end notes and a fine bibliographic essay, revealing the many writings, collections, archives and other sources the author used in compiling this work.

I readily admit that I do volunteer at the James A. Ramage Civil War Museum and have met Dr. Ramage on several occasions. He is man for whom I think the phrase "a gentleman and a scholar" was created. Any comments I have made during this review are my honest thoughts and nothing I wrote was intentionally influenced by my relationship with Dr. Ramage, but I do think it only fitting that readers of this entry know of this

Before reading this book, I knew very little about John Singleton Mosby and did not realize what a long, fascinating and productive life he had, serving for the Confederacy then for the United States. He was not a "scoundrel" like some described Dan Sickles, but, like his Union counterpart, Mosby made the most of life both in and out of the army and always found himself in the center of activity and attention.

Gray Ghost is a very fine cradle-to-grave biography of this southern gentleman, providing an in-depth perspective of this man, his personality, his careers and legacy. Any Civil War enthusiast or student can benefit by reading it and will be better off for doing so.