From the Covington Journal of September 28, 1861 comes this brief article about a meeting that would have some long-term effects in Northern Kentucky and the defense of the Cincinnati region.

The Mayors of the cities of Cincinnati, Covington and Newport, and committees of Councils, met General Mitchel last evening, and an important conference was held as to the defense of the city. It was decided, among other matters, to employ a large force of laborers to dig intrenchments or redoubts on the hills back of Covington and Newport, four in number, and two flanking redoubts on the hills back of this city.

The force of laborers to be employed will be large, and the wages per day have been fixed at seventy-five cents.

--
The results of this meeting were the beginnings of the construction of what would be 28 defensive positions in the area, 2 in Cincinnati and 26 south of the Ohio river, forming a shape like a ring with one side not quite rounded, each end attached to the river, taking advantage of the waterway's curve that forms Kentucky's northern border.

These defensive positions would fortify the area when Confederates under General Henry Heth threatened the region in September 1862, in what became known as the Siege of Cincinnati

The below illustration is a drawing of "Hooper Battery" (or "Battery Hooper") which was one of the first six positions fortified in the fall of 1861. (The others were built more hastily as the Confederates approached a year later.)  This is also the land where the James A. Ramage Civil War Museum is now located, on a hill in what is now known as the town of Fort Wright, named for General Horatio G. Wright. 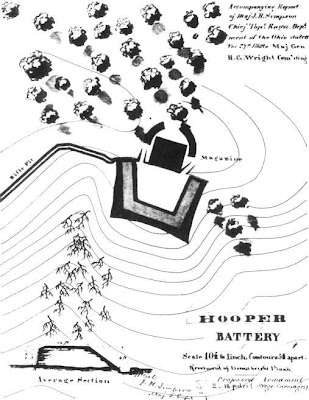