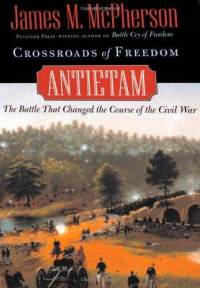 When I buy a book, I usually read it, then place it back on my shelf. Occasionally I will grab a book to try to find a phrase or claim I remember in the book or to clarify my memory on some subject, but very rare is the book that I read a second time.

Antietam: Crossroads of Freedom became one of those rare books. I read and enjoyed it a few years ago, but have now just re-read it as part of the "Let's Talk about it: Making Sense of the American Civil War" series I have mentioned here before.

As expected, this book is very readable and informative, written in a style as most of McPherson's books are. It is only 156 pages long as well, so it is a quick read too.

I've entitled this post as a "discussion" instead of a review as I expect this to be more of an exploration of my thoughts of the message of the book than of a more traditional review. I'll try to keep it at a reasonable length and not touch on most of the many other points that can contribute to these thoughts. (I'm even leaving out any talk of  Gettysburg as the turning point - please pick yourselves up off the floor after reading that if the shock overcomes you.)

My main question about this book is if Antietam is truly the turning point of the war as McPherson contends. He does a good job of showing the mood in the north in the months before the war, with the great concern after the failure of the Peninsula Campaign and the route of Second Bull Run. Some leaders in Great Britain and other European countries were watching events closely and momentum seemed to be favoring either recognition of the Confederacy by those countries, or intervention into the war.

Then Lee's army invaded Maryland. That should have been no way to improve Northern morale.

At this point, the book describes the action of the battle itself, from the famous "lost orders" to George McClellan's equally famous lack of aggressiveness. McPherson shows how that, even before the battle, the Union forces had experienced a sudden improvement in their morale, and were ready for the challenge of a battle on what they considered their territory. This contributed to the ferocity of the fighting, and after the fighting ended, many Union survivors were ready to pursue their enemy and try to inflict even more punishment on them.

McPherson then presents his arguments about Antietam's importance to the outcome of the war, and they are familiar - the Confederates returned to Virginia, Lincoln had the opportunity to issue the Emancipation Proclamation, and foreign recognition of the Confederacy suddenly became unlikely, if not impossible.

They are good, strong arguments, but I'm not sure I agree with them.

For one, the war was only one-and-a-half years old when this fight took place, yet lasted two-and-a-half years more afterwards. Can it be a turning point if the event lasts longer after it occurs?

Also, if Antietam is a turning point because it ended the hopes of foreign recognition of the Confederacy, that implies an assumption that the Confederacy could only win the war with such recognition. Though time proved the Confederates did not get such recognition and did not win the war, I am not convinced that the failure to obtain such recognition doomed the Confederacy. I believe they still had the possibility of gaining victory without foreign intervention. During the summer and early fall of 1864, the Confederates had inflicted many casualties on Union forces in Virginia and had frustrated their foes elsewhere, particularly in the Union's attempt to approach Atlanta. Europe did not offer recognition, but the Confederate armies still bogged the Union armies down and the lack of progress on the part of the Northern forces frustrated and aggravated people at home. Doubt about the war's outcome began to build, and even President Lincoln looked unfavorably at his chances of re-election.

I can understand listing Antietam as one of many turning points in the war, though perhaps that cheapens the importance of whatever is meant by "turning point." In the discussion of THE turning point, my interpretation is of THE moment or event after which Union victory was inevitable. In that regard, I turn back to the middle and end of 1864, and contend that Lincoln's re-election in 1864 was the key event in showing that the Union would prevail. William T. Sherman's capture of Atlanta certainly aided Lincoln's re-election and I have often thought that event was the key, but now I believe the actual election result was the symbol and sign that the northern people were not succumbing to war-weariness; they did not elect a candidate whose party favored peace at almost any cost; they decided to continue fighting until success came.  This spirit displayed by the Northern people dismayed many in the south, and destroyed Southern hopes that the Confederacy could win simply by outlasting the north. The supposed "mechanics" "hirelings" and "wage slaves" of the North had shown a more persistent fighting spirit than their enemies had expected.

Of course, the "turning point" issue is one of the many questions that will in all likelihood always spur debate on the Civil War and McPherson's book does add to that discussion. It may create new thoughts and perspective too. In high school, I bought the "Gettysburg as the high-water mark" turning-point view, have sometimes accepted the points McPherson makes in his book about Antietam and its aftermath, and have also given thought to Sherman's Atlanta campaign as the so-called "turning point" before settling (at least for now) on Lincoln's re-election as the true key "moment" that demonstrated how the war would eventually end.

Although I may not agree now  with McPherson's arguments, I thoroughly enjoyed this book and his analysis. I'm glad I read it again and look forward to the discussion it creates at our next "Let's Talk About it" session tomorrow night.